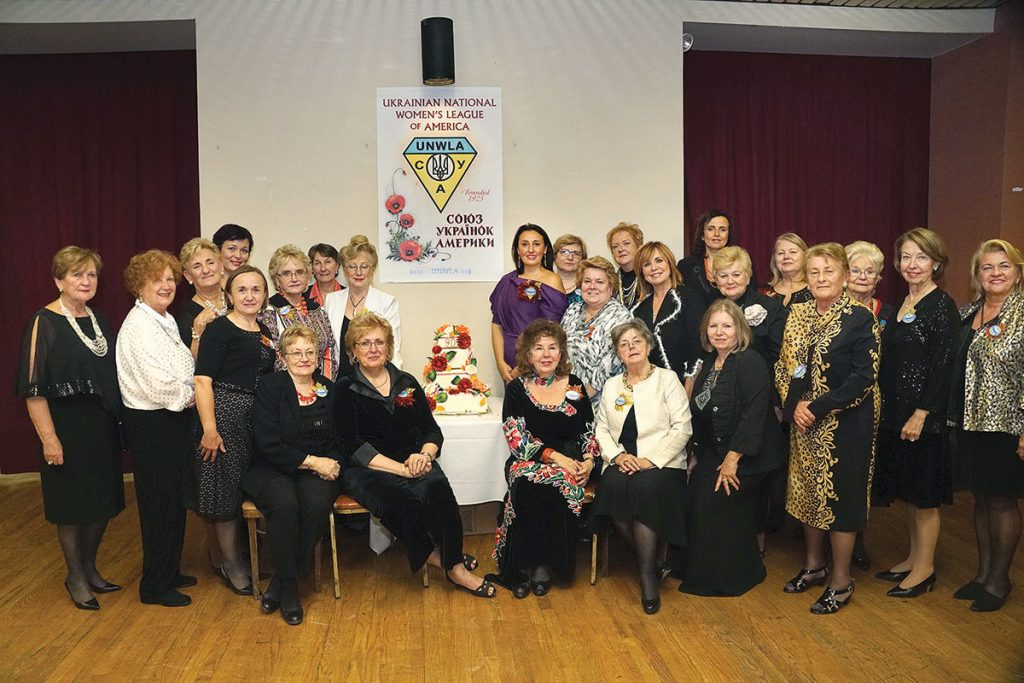 Christine Syzonenko
The UNWLA National Board at the 90th anniversary celebration.

NEW YORK – The Ukrainian National Women’s League of America celebrated its 90th anniversary with a full house of attendees at a festive banquet held on Saturday, October 17, at the Ukrainian National Home in New York City. This event was planned on the weekend of the annual UNWLA National Board meeting, allowing board members from around the country to participate.

Upon entering, UNWLA members were welcomed with a specially designed commemorative 90th anniversary pin, while all guests were offered a blue and yellow “Slava Ukraini” signature toast. The banquet began with the official UNWLA prayer (offered by the Rev. George Bazylevsky) followed by the UNWLA hymn. The banquet’s MCs, Roksolana Misilo and Mariya Andriyovych, welcomed all attending.

The official program began with UNWLA President Marianna Zajac’s historical perspective of the organization’s 90 years, as well as her reflections on why the organization has been successful in the past and looks forward with optimism and ambitious plans for the future.

The permanent representative of Ukraine to the United Nations, Ambassador Yurii Sergeyev, was presented with the Princess Olha Award of the World Federation of Ukrainian Women’s Organizations. The UNWLA was the founder of the WFUWO and is an active member organization whose own members hold key executive positions in the world body. Ambassador Sergeyev was honored for his unrelenting efforts in securing Ukraine’s seat on the United Nations Security Council as a non-permanent member for the years 2016-2017.

It was an evening of nostalgia, as nine decades of history and accomplishments were recalled in speeches and especially in an artistic program titled “Letters and salutations to us – about us.” The presentation was authored by UNWLA Vice-President Lidia Bilous, and performed by UNWLA members Luda Hrabovska and Alla Kutsevich, accompanied by violinist Marian Pidvirnij.

Honorary President Iryna Kurowyckyj as well as 10 UNWLA honorary members (the organization’s highest honor, bestowed for dedication and service to the organization) celebrated this historic event with the membership.

Dignitaries from Ukraine, including Ambassador Sergeyev and Consul General Ihor Sybiga, as well as many community leaders and organization representatives, either read or conveyed their greetings.

Bohdan Kurczak, president and CEO of Self Reliance New York Federal Credit Union, addressed the banquet and presented a donation of $50,000 from the credit union to the UNWLA on the occasion of its milestone anniversary.

The planning committee of the anniversary banquet took great effort to transform the hall into an autumnal setting for this special occasion: remote-controlled tiny lights turned on in each centerpiece for the benediction, gold accents in tablecloths and chair bows were added, flower centerpieces matched the celebratory three-tiered 90th anniversary torte with its spectacular floral decorations, and every guest went home with a UNWLA logo cupcake.

UNWLA leaders noted that attendance at the 90th anniversary celebration by so many diaspora organization representatives was no doubt a manifestation of their recognition of the achievements and good works of the Ukrainian National Women’s League of America.