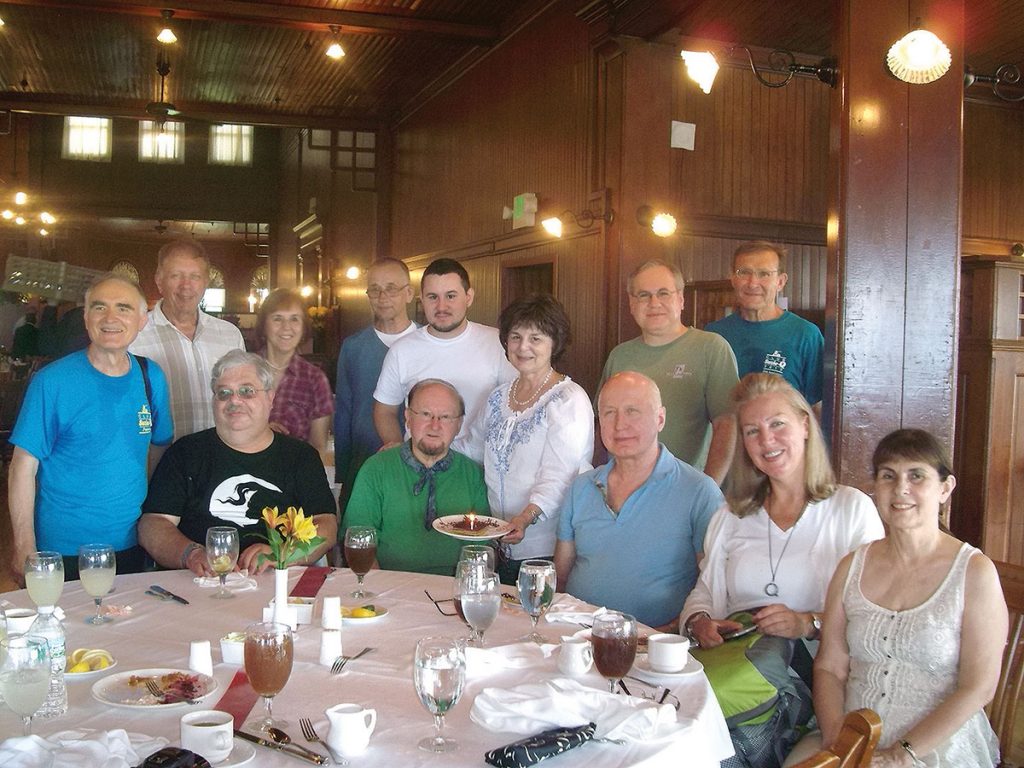 Andrew Hrechak
Dining together is one of the highlights of Club Suzie-Q members and allows for socializing and discussion.

KERHONKSON, N.Y. – Club Suzie-Q, a group of Ukrainian professionals who have been meeting annually since 1984, once again met this past August 15 here at the Soyuzivka Heritage Center.

Twenty-two individuals participated, some for several days, other for the entire week. Club Suzie-Q has been widely known as a great place to meet singles but also serves as a venue to meet up with married friends. This year, attendees traveled from Canadian cities as well as numerous locations on the East Coast.

Members enthusiastically began the week on August 15 with a “hug-in” followed by a weeklong schedule of activities, presentations, hikes, and hours of catching up and conversation. The Club Suzie-Q group exhibits a fun-loving and playful attitude, even adventurous at times, but also shows an intellectual curiosity and seriousness as experienced during scheduled presentations.

As usual, the Club Suzie-Q program formally begins on a Saturday, kicking off in the afternoon and followed by “zabava” in the evening. Members enjoyed dancing to the Tempo band and clapping along to the informal Ukrainian dance performances of youths from Soyuzivka’s dance camp. Members also witnessed the crowning of Miss Soyuzivka 2016.

On Sunday there was a church service and many participated in the church picnic that followed. The afternoon on the Soyuzivka grounds was a social delight, allowing members to catch up with friends, view the art exhibit in the library or relax.

Club Suzie-Q has a tradition of offering excursions beyond the Soyuzivka grounds as well as hiking Soyuzivka trails. Members car pool to various destinations, such as the historic and scenic Lake Mohonk and Minnewaska State Park. At Soyuzivka, the enjoyment of the Green Pool at the wooded trail and the beautiful swimming pool on the grounds should not be underestimated.

The Ukrainian Discussion Night on Monday evening is an important and popular event for members as an annual update and sharing of information about Ukraine and Ukrainian community activism. This year, it generated even more interest because of the pressing need to respond to the ongoing worldwide Russian disinformation and propaganda war against Ukraine. The two Club Suzie-Q members who presented on topics of their expertise were Adrian Bryttan and Lubomyr Zobniw. The panel was organized and moderated by Roma Cehelsky Nightengale of Rochester, N.Y.

Mr. Bryttan of New York City, conductor and concert violinist, is a translator and writer of original material for Euromaidanpress.com. He described the demonstrations that took place in New York City to protest the appearances of pro-Putin musicians at U.S. venues. A talented artist, Mr. Bryttan displayed colorful protest posters he had created for the demonstrations. The artwork was filled with caricatures, satire or other commentaries. Mr. Bryttan described how his use of the posters, various other artistic props of his own design and his performance art attracted considerable media attention to the protest. This resulted in coverage of the protest by The New York Times, The Wall Street Journal and the music blog Slipped Disc.

One audience member remarked, “We gained a new appreciation of how, even with only a shoestring budget, a large dose of creativity when applied to a political protest can lead to a public relations coup with an impressive media response.”

As an election observer of both presidential and parliamentary elections in Mykolayiv and Dnipropetrovsk, Ukraine, Mr. Zobniw emphasized the importance of personally advocating for Ukraine-friendly legislation in Congress. He has been actively participating in “Ukrainian Days” advocacy events in Washington, organized by the Ukrainian National Information Service, urging representatives to support Ukraine during this period of Russian aggression. He encouraged others to participate as well.

Finally, Mr. Zobniw stressed the importance of mass participation by Ukrainian-Americans in the upcoming dedication of the Holodomor monument, set for November 7 in Washington, D.C. “We need to show our strength in numbers to make an impact for further government support,” he said.

After the presentations, there was much discussion and sharing of thoughts and ideas by the attendees. It was clear that the presenters’ passion and high level of involvement in supporting Ukraine was matched by the interest and enthusiasm of the audience.

Other presentations were held as well. Once again, long-time member Yuri Mykolayevych, a private pilot from New York, presented a dynamic aerial view slide show and ground photos of the Shawangunk Ridge, on which Soyuzivka is located. Mr. Mykolayevych pointed out areas of interest in the general vicinity, including hiking trails, lakes, waterways and even some native flora. Audience members were able to relate to the presentation as they viewed places they have hiked and visited.

Anisa Mycak of Forest Hills, N.Y., provided members with a stunning slide presentation of the Mycak family’s journey to Alaska this past year. With assistance from her husband, George, and son, Maksym, she showed images of spectacular Alaskan scenery, from majestic mountain ranges to small picturesque towns, from close-up views of flora and fauna to aerial shots of Denali (Mount McKinley) and surrounding mountain peaks taken during a glacier landing flight to the Ruth Glacier. Afterwards the Mycaks answered specific questions from audience members, some of whom had already traveled there and others who were considering Alaska as a destination for their next travel adventure.

Ms. Cehelsky Nightengale and Dr. Andrew Hrechak of Irvington, N.J., planned and managed the last three years of Club Suzie-Q weeks at Soyuzivka. Club Suzie-Q has met at Soyuzivka for the last 32 years under various leaderships. Despite the name, the club is independent of Soyuzivka and members have met at other locations. For example, a strong representation of members was observed at Toronto’s Ukrainian Festival in September.

Next year’s gathering at Soyuzivka is set for August 13-20. New members are welcome. For further information and to be added to the e-mail list, readers may write to Roma at clubsuzieq@gmail.com.