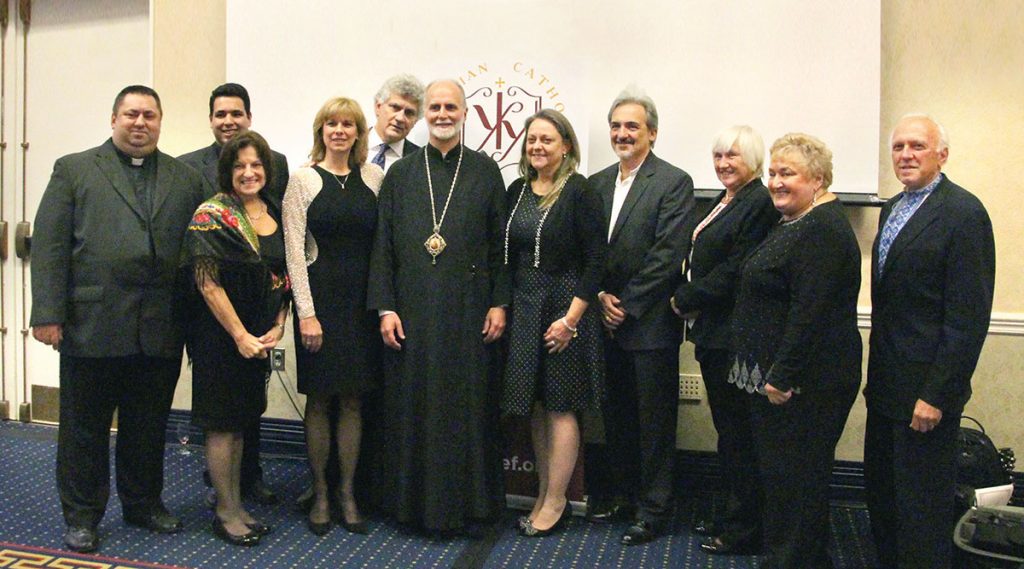 Planning for this week began six months ago, organized by Roma Temnycky, and supported by parishioners of St. John the Baptist Ukrainian Catholic Church. Events were planned for the students and faculty of Syracuse University as well, who honored their 1980 alum with both a lecture opportunity and recognition at a gala banquet on October 31.

Bishop Gudziak, the son of Ukrainian immigrants, grew up in Syracuse, N. Y., and graduated from Christian Brothers Academy, which also honored the bishop at the gala on Saturday evening. LeMoyne College, a Jesuit College in Syracuse, also was welcoming the bishop and representatives of the UCEF in a meeting to discuss future student and faculty exchanges.

On October 28, Bishop Gudziak, who also heads the Eparchy of St. Volodymyr the Great in Paris, delivered a lecture on “Ukraine’s Maidan – Revolution of Dignity – Civil Society and Education” at the Maxwell School of Citizenship and Public Administration. Samuel Clemence, dean of Hendricks Chapel, introduced the bishop to an audience of students, faculty, staff and members of the local community. The talk, accompanied by a PowerPoint presentation, was so engaging that not one student used a cellphone or texted during the entire presentation. The question and answer period had to be drawn to a close so that audience members, representatives of both UCU and the UCEF, together with Bishop Gudziak could interact more personally during a reception which was hosted by the Maxwell School Moynihan Global Affairs Institute.

Syracuse media also were very interested in UCU and interviewing Bishop Gudziak, who is the university’s president. A talk show on Channel 9 in Syracuse (an ABC affiliate), “Bridge Street,” featured the bishop on the morning of October 29 (the segment can be viewed at http://www.theusdaily.com/articles/viewarticle.jsp?id=4142185-0). “Newsmaker,” also on Channel 9, featured a full half-hour interview with Bishop Borys on November 1 (it can be seen at http://www.clipsyndicate.com/video/playlist/1805/6048045?title=broadcast_local_2).

In the evening, a gala banquet to benefit the Ukrainian Catholic University, held at the Sheraton Syracuse University Hotel and Conference Center, was attended by 170 people.

Among those in attendance, who volunteered, together with the organizing committee, for all the events of this week, were students of the newly reorganized Ukrainian Club of Syracuse University, under the leadership of President Oleksiy Anokhin, Hursky Fellow in the Maxwell School, and Marko Temnycky, vice-president and graduate assistant in the Department of Public Administration in the Maxwell School.

The Odesa Ukrainian Dance Ensemble began the evening with the traditional “Pryvit” (Welcome) dance. After a program led by master of ceremonies Dr. George Temnycky and musical entertainment by singer Oksana Mukha of Lviv, Bishop Gudziak held the audience in rapt attention for his presentation about the need for and value of the Ukrainian Catholic University. Not a person left the banquet hall until after his speech.

Although final calculations have not yet been completed, the Syracuse gala is expected to have raised almost $100,000 for expansion of the campus, establishment of innovative programs, faculty support, scholarships and expansion of the university’s endowment.

The organizing committee expressed gratitude to all those who donated small and large amounts to support UCU. It also thanked Anatoli Tichonovich Truskalo, Denys Vasylevskyy and Stephen A. Long, who donated their time and resources as videographers and photographers of the events on Saturday.

Patricia A. Burak is director of the Slutzker Center for International Services at Syracuse University and a member of the organizing committee.