UWC meeting in Madrid concludes with march in support of Ukraine 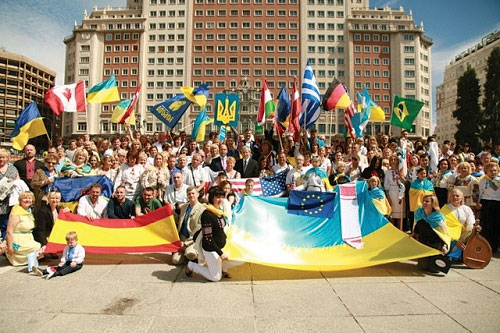 UWC
Participants of the peaceful march in Madrid.

MADRID – The Ukrainian World Congress (UWC) on September 13 concluded its three-day annual general meeting (AGM) in Madrid with a peaceful march in support of the Ukrainian people in their struggle for Ukraine’s independence, sovereignty and territorial integrity.

The AGM officially opened on September 11 at the world-renowned Cervantes Institute and was attended by 64 delegates and 53 guests from 20 countries.

On 13 September 2015 the UWC held a peaceful march – whose theme was “Ukrainians throughout the world with Ukraine” – through central Madrid, where AGM delegates and guests from around the world joined the local community in a show of unity with the Ukrainian people in their struggle against Russian aggression.

Following the march participants attended divine liturgy at the Church of the Annunciation of the Blessed Virgin Mary.

On September 1, a UWC delegation headed by its president also visited the Ukrainian community in Alcalá de Henares, Spain.

“The Ukrainian World Congress thanks the Ukrainian community in Madrid, particularly Yuriy Chopyk, president of the association Ukrainian Community in Spain for the Rights, Honor and Dignity of Ukrainians, for the warm hospitality extended to the delegates from around the world contributing to a productive annual general meeting,” stated UWC President Czolij.