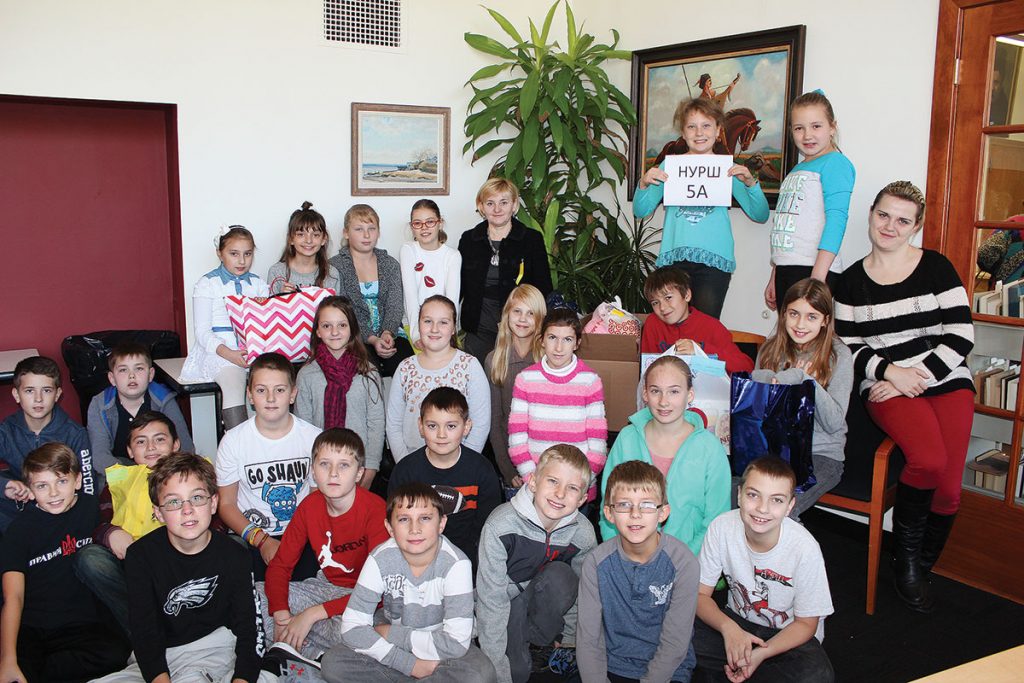 JENKINTOWN, Pa. – The Philadelphia Regional Council of the Ukrainian National Women’s League of America (UNWLA) and the Ukrainian Heritage School, both located here at in the Ukrainian Educational and Cultural Center (UECC), jointly initiated a humanitarian project to aid children of the fallen soldiers killed during the ongoing battle against Russian invaders in eastern Ukraine.

“We wanted to do something during Christmastime that would bring a little sunshine and happiness into the lives of these children, many who are now orphans as a result of the fighting in Ukraine,” said Halyna Keller, member of the UNWLA Philadelphia Regional Council. She added, “We wanted every child to get a Christmas gift.”

Danna Yudina, social welfare chair of the Philadelphia Regional Council, traveled to Ukraine to identify the children who would benefit most from this program. She visited 41 children, ages 5 months to 19 years, from different parts of Ukraine, mostly from Volyn, affected by the events of the Maidan. She talked with them and their mothers, and took photos.

She told the moving story of one little boy, Matviyko, who was born on the day his father was buried. His mother, Luba, is now a devastated widow with five children. Ms. Yudina also spoke about Mykhailyk, whose father perished during battle and mother died of throat cancer a month later. He is now being cared for by his grandparents.

“Every child has his or her own heart-rending story. I felt I had to go home to organize a way to help these poor victims – a way to make them feel loved and not forgotten,” said Ms. Yudina.

Ms. Keller and Ms. Yudina contacted Olha Kostiv, principal of the Ukrainian Heritage School, and Vera Pryszlak, PTA president, to present the project. Both were overwhelmingly in favor of it and quickly prepared a way to implement it. It was decided that each classroom, K-12, (a total of 17) would adopt a boy and girl (of ages comparable to the class). In addition, Svitlychka (preschool) took two infants and two toddlers. UNWLA Branch 91 “adopted” one boy, and the Regional Council took the last two.

The children from the Ukrainian Heritage School were excited to help their “brothers and sisters” in Ukraine. Collections began on October 28 through November 21. The UNWLA Regional Council room at the UECC was inundated with packages of goods for the children. The items collected included warm clothing, toys such as dolls, Legos and Hot Wheels, as well as toiletries, school supplies, candy, etc. When news of this was posted on the Ukrainian Heritage School website, an anonymous benefactor donated $1,000 for mailing costs.

Ms. Keller said, “The response to the project has been overwhelming. I knew we would get a generous participation from our community, but I never anticipated the amount of thoughtfulness and the incredible generosity of our students and community. I hope this will make this Christmas season a bit easier and a little nicer for these children who have been through so much.”