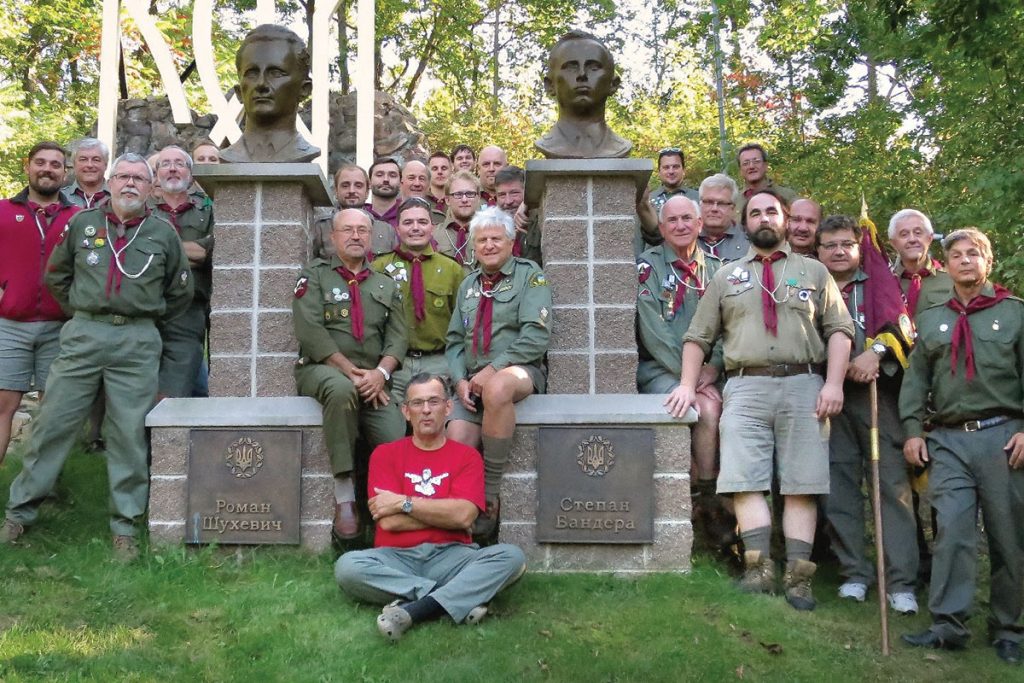 George Kuritza
Members of the Plast fraternity Pobratymy at their general meeting in Wisconsin.

BARABOO, Wis. – Thirty-four members of the Pobratymy fraternity of Plast Ukrainian Scouting Organization gathered on the weekend of September 26-27 at the Ukrainian American Youth Associaton campground Beskyd near Baraboo, Wis., for their 50th general meeting (“rada”).

The weekend gathering was preceded on Friday by a canoe trip down the Wisconsin River. The weather was perfect and nature put on a show with a multitude of bald eagles nesting along the river and flying overhead (one zoomed over not more than 25 feet above the canoeists).

During this year’s meeting, which included both the young adult and senior scouts, numerous Plast issues were discussed, the past year’s work was reviewed, and plans were made for the coming year. In addition to such serious business, old friends gathered and new friendships were cemented. Saturday evening culminated with a campfire and a celebration of Pobratymy traditions.

The rada also included the annual meeting of the Pobratymy Foundation, a 501(c)(3) charitable foundation set up to support Plast activities. Since its inception in 1992, the foundation has donated approximately $125,000, including $5,000 earmarked at this meeting in humanitarian relief efforts to support Plast members and their families victimized by the war in Ukraine.

Members of Pobratymy are active in Plast and Ukrainian community organizations in Chicago, Toronto, Philadelphia, New Jersey, and Denver. Pobratymy were founded and held their first rada on December 30, 1966. Next year, Pobratymy will celebrate the 50th anniversary of their founding with events in Chicago during the last weekend of September. Readers are invited to check out the Facebook page “Pobratymy – Побратими” and visit the webpage www.pobratymy.org.