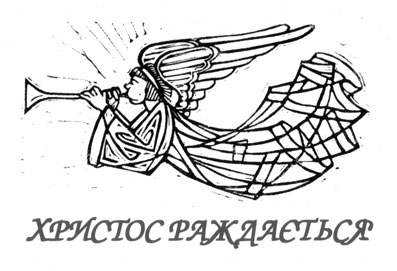 Nativity Epistle of the Permanent Conference of Ukrainian Orthodox Bishops Beyond the Borders of Ukraine.

To the venerable clergy, monastics and faithful of the Ukrainian Orthodox Church beyond the borders of Ukraine and to our brothers and sisters in Christ in Ukraine:

Christ is born! Let us glorify Him!

This is the proclamation of the angel to the shepherds with the joyous news of Christ’s birth. What was it like on this wondrous night in Bethlehem? We envision that it began as a quiet, clear and star-filled night. On the hills surrounding the town, sheep munched silently, while their shepherds drowsily warmed themselves around a fire.

Suddenly, the night sky blazed with brilliant starlight. As the star’s radiance filled the sky and grew ever-brighter, the shepherds saw the choirs of angels appear, filling the air with their sweet song – the first Christmas carols. And the angel told the shepherds, “I bring you good tidings of great joy which will be to all people. For there is born to you this day in the city of David a Savior, who is Christ the Lord. And this will be the sign to you: You will find a Babe wrapped in swaddling cloths, lying in a manger” (Lk. 2:10-13).

How did the shepherds respond to this call? Like the disciples chosen by Jesus, the shepherds dropped everything and, taking their sheep, followed the Christmas star to the humble manger to honor the Newborn Son of God (Lk. 2:13-20). There, the shepherds found that a miracle took place in this small cave – the Incarnation of the Word of God. St. John Chrysostom in his homily on the Nativity describes this scene as such, “Bethlehem this day resembles heaven; hearing from the stars the singing of angelic voices; and in place of the sun, enfolds within itself on every side, the Sun of justice.”

The Prince of Peace deigned to come down into the world as a man – doing so in humility, modestly and without pretention. He was born of the Most-Pure Virgin Mary in a cave-stable in the provincial town of Bethlehem. There were practically no human witnesses to this heavenly wonder. Only the shepherds and the wise men, foreigners from the east, first recognized the call of the star to honor the newborn Christ-Child. Their presence is explained by St. Gregory the Theologian in his homily on the Nativity, “But let us return to the present joy, which the angels proclaim to the shepherds, which the heavens declare to the Magi, which the spirit of prophecy announces through many and sundry utterances, so that the Magi become heralds of Grace.”

Just as the myrrh-bearing women and guards were first to witness the newly risen Christ at His Glorious Resurrection, so too at His birth, the foreigners and shepherds were the first witnesses of the Incarnation to give testament to this miracle. And they did so without reservation. Both the shepherds and the wise men immediately accepted in their hearts the meaning of the birth of the Christ-Child. During this Nativity season, will we be like the wise men and the shepherds, setting aside our worldly cares and unhesitatingly following the light of the Christmas star until it reaches its apex – the Nativity of Jesus Christ our Savior?

Let us explore the meaning of these wondrous events in Bethlehem. The traditions of the Orthodox Church and our Ukrainian culture are inscribed with deep meaning that reinforce the dramatic events of that Bethlehem night. Our beautiful Christmas carols preserve the significance of the Nativity story in song. We hear in our Nativity worship services that God has been preparing humanity for some time through the Old Testament prophets to greet the coming of the Savior Who will free humanity from the power of the devil. Christ was born to free the human race from sin and death, and to lead humanity to God’s grace and forgiveness. Through His teachings and by His own example, the Son of God ushered in a new age based on the power of goodness and love. This is the meaning of this joyful feast day.

God has done everything necessary for our salvation, but humanity has not yet fulfilled its part. The Lord saves us through His grace and mercy, but only with our participation. The Mystery of the Incarnation can only be understood through faith. Not all of humanity has received Christ with an open heart. There are many in the world today who do not yet accept the Incarnation of the Son of God, or understand that the meaning of the Nativity is the beginning of our salvation – and not just a time for social gatherings, exchanging gifts or extended vacations. Our attention at this time of the year is diverted by the mundane cares of the world – the Christmas shopping, the office parties, school plays and holiday preparations. It becomes too easy to get caught up in these activities, distracting us from preparing for His birth and the meaning of the feast day. God gave humanity free will, so it must come to Christ of its own volition. Christ is still knocking at the door to our hearts, waiting for us to open it and “sup with Him” (Rev. 3:20).

Today, many people believe that they do not need Christ in their lives. Still others worship Christ, but do not invite Him into their lives. Without Christ, the world will continue to know unrest, war, violence and destruction. This is the world we see today – turmoil, wars, division, persecution of Christians, rampant secularism and apathy towards spiritual life. The Incarnation of the Son of God brings peace as a pastoral response to these contemporary sins and human sufferings. Yet peace can only come if we embrace it as offered, living our lives as Christ teaches, and glorifying God in our hearts. Then we can say that we have worthily met the Nativity of the Savior. If good, and not evil, triumphs in the world and we show our love and compassion towards others, then we will grow to understand that love is precisely that precious treasure that we will take with us into eternity. Christ the Savior leads us on a different path – towards the transformation of humanity. This is why Christ was born.

The light of Christ’s birth shines upon all of us once again. The Star beckons us to follow through the 40 days of fasting and preparation of our bodies and souls. Let us glorify Him not just by words, but with our whole lives. As we gather with our families for the Nativity feast day, we pray that we will see the Light of the World, like the shepherds and Magi on that Bethlehem night and become “heralds of grace.” This is the Light of God’s Truth and Love. The angels proclaim: “Glory to God in the highest, and on earth peace, goodwill toward men” (Lk. 2:14). As we enter into this New Year 2016, let us begin to live this year in a way that pleases God so that we may indeed bring peace on earth and share in God’s loving goodwill toward us.

During this Nativity season we make a special appeal to our faithful to pray for protection, salvation and the well-being of our brothers and sisters in Ukraine, who are suffering through a difficult period of history, as well as for our fellow Christians in the Middle East, who are experiencing brutal persecution and are forced to flee historic Christian lands.

May you have a loving and holy Nativity and a blessed New Year 2016 living together with our Lord!

Christ is born! Let us glorify Him!

With prayers and hierarchical blessings,

† Yurij,
Metropolitan of the Ukrainian Orthodox Church of Canada

† Ioan,
Archbishop of the Ukrainian Orthodox Church in the Diaspora

† Jeremiah,
Archbishop of the Ukrainian Orthodox Eparchy of Brazil and South America

† Ilarion,
Bishop of the Ukrainian Orthodox Church of Canada

† Andriy,
Bishop of the Ukrainian Orthodox Church of Canada

† Daniel,
Bishop of the Ukrainian Orthodox Church of the U.S.A.

Temporary Protected Status now available for Ukrainians in the U.S.