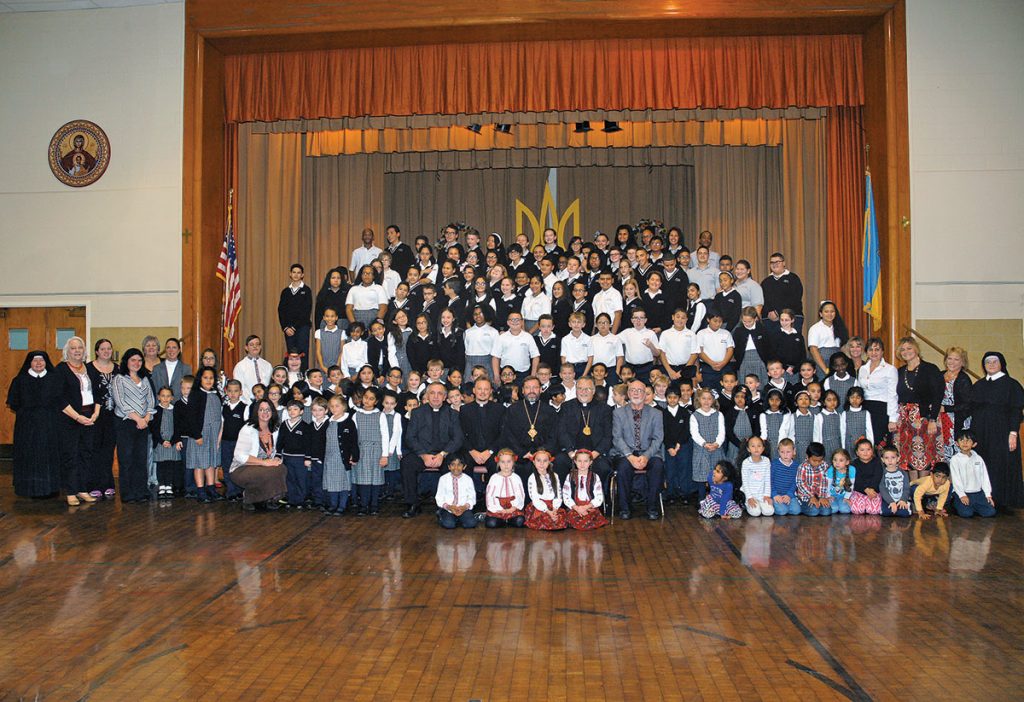 PERTH AMBOY, N.J. – While Patriarch Sviatoslav was in the United States for the blessing of the Holodomor Memorial in Washington and events at the Cathedral of the Immaculate Conception in Philadelphia, he expressed a desire to visit schools in the Archeparchy of Philadelphia.

Traveling with Archbishop Metropolitan Stefan Soroka, Patriarch Sviatoslav visited Assumption Catholic School (Perth Amboy, NJ), the largest of the schools in the archeparchy, on Wednesday afternoon, November 11. When he entered the auditorium, all 170 students thunderously greeted him with “Slava Isusu Khrystu!” While students in traditional Ukrainian dress presented the patriarch with traditional bread and salt, others greeted him in three languages: Ukrainian, English, and Spanish.

Father Ivan Turyk, pastor, led everyone in prayer and members of the Junior Drama, Senior Drama and Glee Clubs (under the direction of Melanie Lawrence) presented the mission and 52-year history of the school in word and song.

After thanking the students for a wonderful program prepared on his behalf, Patriarch Sviatoslav entertained questions from the students (again in three languages). And what a variety of questions! Students were interested in knowing about his calling to the priesthood, favorite food and sports, the current tragic situation in Ukraine, the symbolism of his staff, the qualities of a leader, whether he would pray for a sick relative, and even whether he knows Pope Francis.

Patriarch Sviatoslav answered all of their questions with patience and good humor. The students were amazed when he told them that he does have a close relationship with Pope Francis.

In closing, Principal Szpyhulsky thanked the patriarch for making the time to visit with the students, and promised to continue the school’s tradition of honoring the words written above the entrance to the school: To know, to love and to serve God. The patriarch’s historic visit motivated both students and teachers to work towards becoming true Christian leaders in the 21st century.