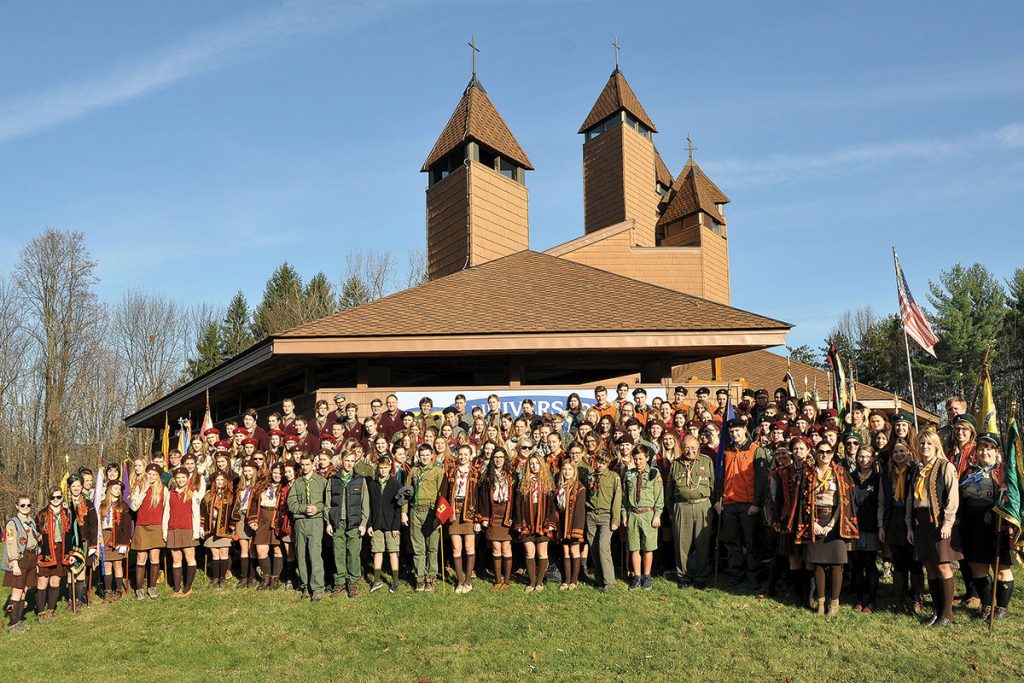 KERHONKSON, N.Y. – Fifteen teams of Plast scouts from across the U.S. and Canada gathered on November 14-15 on the grounds of Soyuzivka Heritage Center to participate in the 53rd Orlykiada, an annual competition focused on broadening participants’ knowledge of Ukrainian history and culture.

Orlykiada is sponsored and organized by the Plast fraternity Orlykivtsi, and for the third consecutive year the Plast sorority Verkhovynky helped run the event.

“It’s so heartening to see how much the teams commit to the theme and to the competition,” commented Orlykiada’s Deputy Commandant, Marta Mudri, who was also the head judge for the exhibit competition. “A few teams even contacted Ivasiuk’s family in Ukraine, and we were pleasantly surprised to be able to see the composer’s actual personal artifacts,” she noted.

Orlykivtsi member Tanya Kosc added, “It was also wonderful to hear audience members join in to sing along with the performers during the theatrical performances, which I’ve never witnessed before. I hope this experience has a lasting impact on future Plast activities and events, such as spiv (singing) and vatry (bonfires).”

While most participants spent the evening recovering from a long day of competition, seven participants spent the evening meeting with judges as they vied for the titles of “hetmanych” and “hetmanivna,” awarded to Orlykiada’s outstanding male and female scout, respectively, who best reflect the ideals embodied by Hetman Hryhor Orlyk. Candidates were judged based on their activity and leadership roles in Plast; their knowledge of Ukrainian history, culture and current events; and how their attitudes and behavior reflect the ideals of Plast. The competition continued into Sunday, culminating in the announcement of this year’s winners: Pavlo Stasiouk of Cleveland was named hetmanych, and Kalyna Leshchuk of the Plast branch of Newark, N.J., was named hetmanivna.

Commenting on the personal significance of his new title, Hetmanych Stasiouk stated: “Receiving the bulava [mace]and being named hetmanych has given me new inspiration to be active in Plast, Orlykiada and the Ukrainian community. I want to be a worthy successor to this tradition. Like Hryhor Orlyk, I believe that I can help Ukraine from abroad. Orlyk refused the title of hetman because he believed he could accomplish more as a diplomat. I wanted the bulava, because I believed that the hetmanship would help me in my activities. We, as Ukrainian diaspora, need to join hands and continue the cause of our role model Hryhor Orlyk.”

Members of the winning team were excited about their victory, which reflected their efforts in preparing. Team member and troop leader Maksym Hryhorczuk stated, “Our team worked really hard to prepare for the competition. We learned a lot about Ukraine during the Soviet era. We enthusiastically met at our ‘domivka’ [the Plast branch’s home], where in a friendly atmosphere we enjoyed the music of Volodymyr Ivasiuk.”

Participants were invited to return for next year’s competition, which will focus on the rich history and traditions of the Kozaks and their long-term impact on Ukrainian culture and identity.