2015: The noteworthy: People and events 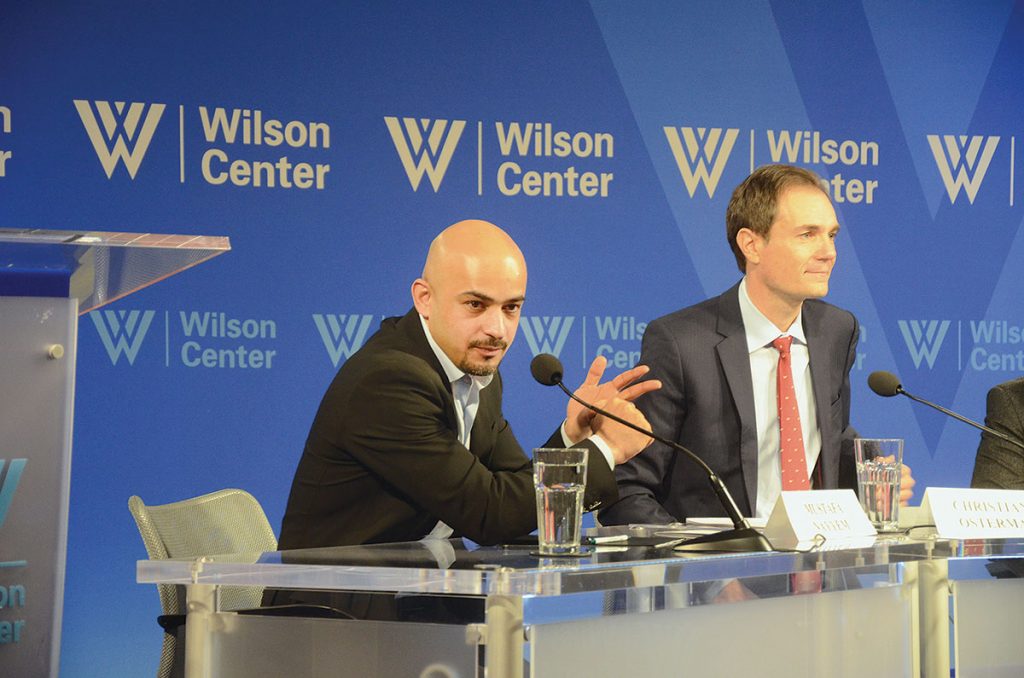 Yaro Bihun
Mustafa Nayyem, the recipient of the 2014 Ion Ratiu Democracy Award (left), answers questions after his presentation about “Ukrainian Democracy after the Maidan: Threats and Opportunities.” Seated next to him is Christian Osterman, director of the Wilson Center’s Global Europe Program.

This section features the noteworthy events and people of 2015 that defy easy classification (or could fit under more than one of our Year in Review categories).

• Bishop Borys Gudziak, who is based in Paris and serves as bishop for Ukrainian Catholics in France, Belgium, the Netherlands, Luxemburg and Switzerland, was awarded the National Order of the Legion of Honor. The order was established by Napoleon Bonaparte in 1802 and is the highest decoration in France. It is awarded to those who “have served France or the ideals it upholds,” and seldom presented to a non-French national. The president of the Ukrainian Catholic University, Bishop Gudziak is globally recognized for his scholarly achievements and pastoral inspiration and has helped make the university an exemplary educational institution. News of the award was repored in February.

• Mustafa Nayyem – journalist, democracy activist and member of Ukraine’s Parliament – on February 12 received the 2014 Ion Ratiu Democracy Award for his efforts to establish a true democracy in Ukraine. In April 2013, Mr. Nayyem, along with several journalist colleagues, established Hromadske-TV, Ukraine’s first Internet television platform. Via a post on Facebook near the end of 2013, Hromadske was instrumental in helping launch the mass protests on the Maidan. Elected to the Verkhovna Rada in the 2014 elections, Mr. Nayyem focused his attention on working to eliminate corruption – the topic of his keynote remarks at the Woodrow Wilson International Center for Scholars’ 10th annual Ion Ratiu Democracy Award Workshop. The workshop topic this year was the opportunities and threats to the development of democracy in Ukraine since the Euro-Maidan.

• “Pavlo’s Taste of Ukraine,” a Denver-based food truck owned and operated by Ukrainian American Pavlo Makolondra, was featured on March 9 on KDVR Fox 31’s “everyday Colorado” segment. Completing his culinary education in Minneapolis, Mr. Makolondra returned to Denver in 2014 to start Pavlo’s Taste of Ukraine, basing his selections on guidance from his Ukrainian-born grandmother. Menu items include Ukrainian favorites such as varenyky, holubtsi, kovbasa and borshch.

• Ukraine Today, an Internet television news channel in English was formally introduced on March 27 at the Embassy of Ukraine in Washington. The channel was created to provide the world with objective information in English about what is happening in Ukraine. Dr. Lada Roslycky, the station’s director of strategic communications, said that, in addition to providing truthful information about Russia’s war against Ukraine and the international response to it, Ukraine Today will also focus on economic reforms in Ukraine, its business and investment opportunities and risks, and on its society and culture.

• Daniel Berehulak, an Australian photographer and photojournalist, was awarded the Pulitzer Prize on April 20 for his feature photography work on the Ebola breakout in West Africa for The New York Times. Mr. Berehulak spent 67 straight days capturing images of those on the frontlines of the disease – from doctors to gravediggers, taking extreme precautions to protect himself from infection. A native of Sydney born to post-World War II Ukrainian immigrant parents, Mr. Berehulak is based in Barcelona and New Delhi. He was a 2011 Pulitzer Prize finalist for his coverage of the 2010 floods in Pakistan, and has been awarded three World Press Photo awards, the John Faber award from the Overseas Press Club, and been named the Freelance/Agency Photographer of the Year by Pictures of the Year International.