2015: The year in sports: Ukraine and the diaspora 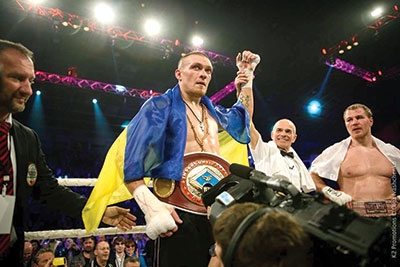 NOCU
WBO Intercontinental Title champion Oleksander Usyk sports a title belt after winning against Andrey Knyazev of Russia at the Sports Palace in Kyiv on April 18.

Although Dnipro Dnipropetrovsk’s Europa League final on May 26 was a 3-2 loss to Spain’s Seville on the pitch in Warsaw, Poland, one can pitch the notion it was a win for Ukrainians everywhere – and a highlight of sports news in 2015.

Fans who could not afford the trip were awarded transportation and tickets by the club. It was a great opportunity for Ukrainian sports fans affected by Russia’s aggression to escape, cheer for their countrymen and lift their spirits. The pro-Ukraine crowd in Warsaw voiced loud displeasure with Russian President Vladimir Putin. The expression of solidarity with Ukraine in the face of Russian aggression – during a major European soccer event that attracts millions of viewers worldwide – was a diplomatic slap in the face to Russia with soccer as the medium. Quite a contrast to Russia using the Sochi Olympics to high-five the “normalcy” of Russian expansionism, only to invade Crimea during the Paralympic Games. It is during times like this that soccer is more than a sport – it can serve as an international venue, a forum on world events – where fans can passionately cheer for their team while exuberantly showing support for their homeland.

In Olympics news, Serhiy Bubka announced on January 29 that he would challenge Sebastian Coe for the presidency of the IAAF. The challenge proved unsuccessful.

A shocker occurred in late November when boxing champion Wladimir Klitschko lost his four heavyweight titles to challenger Tyson Fury. Nonetheless there were many gold medals won, victories to celebrate and sporting events to commemorate during 2015.

Below, in alphabetical order by sports, is a listing of the top sports achievements of the year.

Ukraine’s women’s team won gold at the ARCHERY World Outdoor Championships in Denmark on August 1, their first ever outdoor victory.

Tampa Bay’s third baseman, Evan Longoria, Ukrainian on his mother Ellie’s side, is a true franchise player – the face of the BASEBALL Rays.

Kelly Olynyk shows lots of promise for the rebuilding Boston Celtics, while Alex Len proved himself worthy of a No. 5 overall National BASKETBALL Association draft pick in his second pro season.