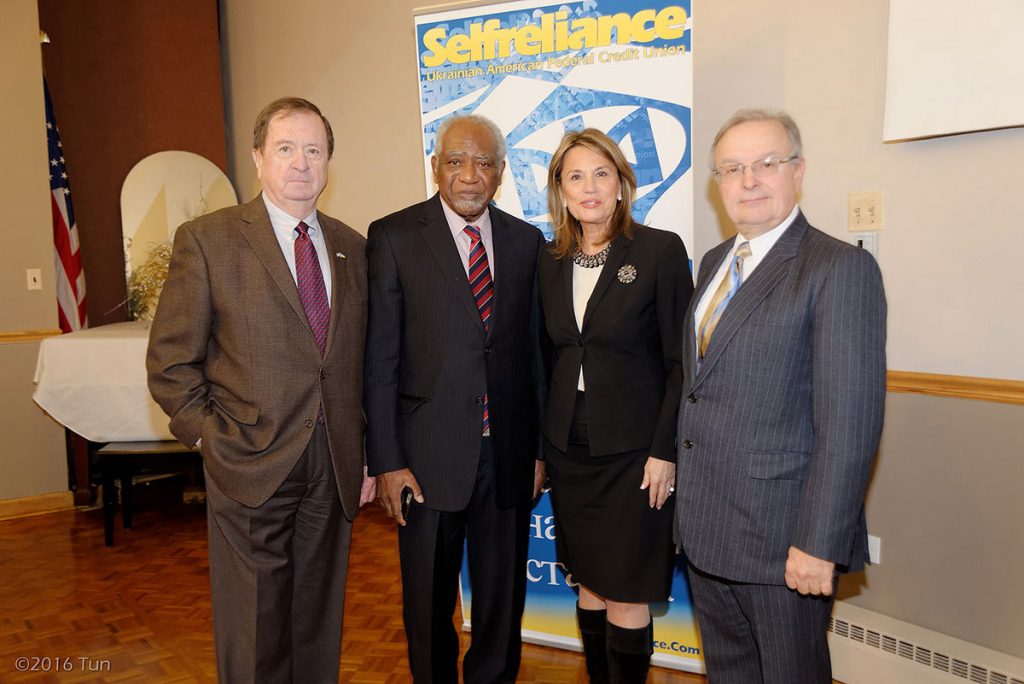 For decades, these dates honored past history and past heroes, but for younger generations they felt distant and disconnected from current events. Now history resonates in the lives of all generations of Ukrainians throughout the world. The Maidan Revolution, the killing of innocent protesters in Kyiv and then soldiers and civilians in eastern Ukraine, Russia’s invasion of Crimea and the ongoing Russian-led war in Donbas against Ukraine has brought home the significance of the century-long struggle.  As these assaults on Ukraine continue, a new generation understands that the past struggles form the basis for the road for independence and sovereignty that Ukraine has had to endure to this day.

The commemoration in Chicago opened on a patriotic note with the posting of colors by the Ukrainian American Veterans Post 32, led by Commander Peter Bencak, and the singing of the American and Ukrainian national anthems by Nazar Karabynovych. Members of Congress, city and county administration officials attended the event, as did representatives of ethnic communities and consulates of Ukraine’s neighboring countries. Members of the Ukrainian community, along with the pastors of the churches that serve the community, came together to honor the heroes who fight and give their lives for their country. A first-time emcee of the program, Bohdana Bahriy led the proceedings in both the Ukrainian and English languages, impressing everyone with her ability as a public speaker.

In his address to the audience, Robert Rusiecki, deputy consul general of the Republic of Poland in Chicago, noted that last year’s election of President Andrzej Duda and a new government did not change Poland’s position of support for Ukraine. Mr. Rusiecki specifically stated four points of support that reaffirm his country’s position. He emphasized, “Poland will support Ukrainian independence and sovereignty, Poland will be vigilant on the observance of a ceasefire as provided in the Minsk agreement, Poland will extend a 1 billion Euro credit line to Ukraine, and Poland will support Ukraine’s entry into the European Union and visa-free travel provisions.”

Congressman Danny K. Davis, who is a fervent advocate of coalition-building and human values in Congress and with his constituents, has been a continuous supporter of the Ukrainian American community in Illinois. He travelled to Ukraine, and is thoroughly familiar with the political, economic and social issues faced by the country. Rep. Davis mesmerized the audience as he recalled his experience of visiting Ukraine and seeing the changes taking place.

Larysa Gerasko, consul general of Ukraine, who was recently appointed to serve in Chicago, reminded everyone that just as the people of eastern and western Ukraine united in 1919, today the invasion by Russia united the people of the country’s east and west regardless of language or ethnic differences, and provided a national identity and sense of dignity.

The consul general of the Republic of Lithuania, Marius Gudynas, who joined the Ukrainian community in each of the protests during the freezing Chicago winter in support of the Maidan in 2014, expressed his own and his country’s support of Ukraine at this difficult time, and spoke of the important role of unity. He explained that unity is a tool to reach many goals to change lives and bring about a different future enshrined in human dignity. He continued, “When we stand together, we cannot be defeated.  Lithuania stands with Ukraine. Our Lithuanian choir will perform at the Lithuanian Independence Day concert, and in support of Ukraine the choir will sing a new composition, ‘Ukrainian Alleluia’, by America composer Craig Courtney.”

Other greetings were presented by Mariyana Spyropoulos, president of the Metropolitan Water Reclamation District. Ms. Spyropoulos is a friend of the Ukrainian community and on many occasions welcomed delegations from Ukraine that are working on water management projects for safety, quality and use, and has shared her department’s expertise with specialists from Ukraine.

Honorary Consul of Lithuania Dr. John Prunskis thanked Ukrainians for coming to defend Lithuania’s Parliament 25 years ago at the moment it declared independence from the Soviet Union, and that Lithuanians shall never forget that support. Greetings from Sen. Mark Kirk, Reps. Bob Dold and Mike Quigley, and from Chicago Mayor Rahm Emanuel were presented as well.

The keynote speakers of Unity Day were Marta Farion, attorney, president of the Kyiv-Mohyla Foundation and vice-president of the Illinois Division of UCCA, and Borys Potapenko, vice-president of International Council in Support of Ukraine and co-chair of the America Ukraine Committee. Each speaker described recent trips through the Donbas. Mr. Potapenko met with civil society groups and volunteers, and Ms. Farion visited the military points on the border with occupied territories.

Ms. Farion described her route with volunteers, starting in Kharkiv, then south to Sloviansk, Kramatorsk, Krasnoarmiisk, Pisky, Kurakhove and Mariupol, where they met with residents of the towns and military personnel on the front. Mr. Potapenko described the work of volunteer organizations in many of the same towns and cities.

Both emphasized their admiration of the highly motivated individuals in the volunteer sector and the military. In the presentation of slides from their trips, the message that came across was one of hope and the positive spirit of the fighting units and volunteers.  Both confirmed the need for assistance to the people of the Donbas region who are struggling to rebuild their lives in the territories destroyed by Russian-led terrorists. A special point was made about the need for psychological assistance for those suffering post-traumatic stress.

A brief video prepared by Motria Melnyk reviewed the struggle for Ukraine’s independence since 1991, and the current military response to the war instigated by Russia. Another video featured statements and greetings from people living in the area. Donations were collected for humanitarian aid to the Donbas area.

An awards presentation conducted by Dr. Maria Korkastch Groszko, vice-president, and Dr. Alex Striltschuk, president, of the UCCA Illinois Division recognized the many years of dedicated contributions to the Ukrainian community by Ivan Derkach, Volodymyr Bratkiv and Kalyna Wasiunec. They were presented with plaques capsulizing their activities as an expression of sincere appreciation by the community.