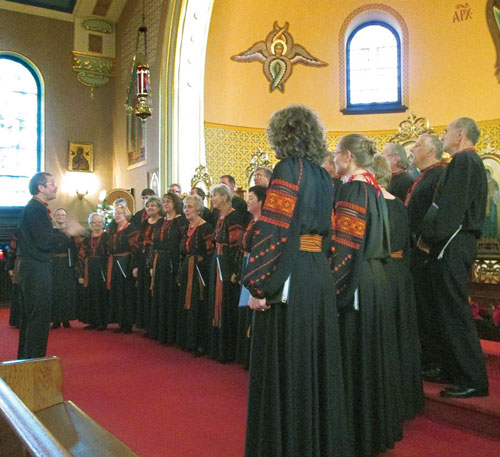 WOONSOCKET, R.I. – With a quick motion of his hands, choir director Alex Kuzma launched the Yevshan Ukrainian Vocal Ensemble into the powerful opening of “Boh Predvichnyi.” The profound performance of this arrangement by Alexander Koshetz opened the December 20, 2015, concert at St. Michael the Archangel Ukrainian Catholic Church in Woonsocket, R.I., which was organized with the assistance of Cornel Osadsa and sponsored by Open MRI of New England.

Following an introduction by Msgr. Roman Golemba, the pastor of St. Michael’s and of St. John the Baptist in Fall River, Mass., Mr. Kuzma led the group through versions of classic Ukrainian Christmas carols (koliady) and shchedrivky, featuring arrangements by Kyrylo Stetsenko, Anatoliy Avdievsky, Vasyl Stupnytsky and Mykola Leontovych. Also on the program were compositions by Leontovych and Dmytro Bortniansky.

Accompanied by a bandura quintet, the chorus performed a divine “Nebo i Zemlia,” as arranged by Mr. Stetsenko. Also noteworthy was the ensemble’s rendition of the koliada “Chy Doma, Doma, Khazayin Doma,” in another arrangement by Mr. Stetsenko, which allowed Mr. Kuzma to highlight the qualities of the ensemble with sectional solos.

The lush harmonies of “Shchedryi Vechir,” a contemporary composition by Bohdan Sehin of Lviv, portrayed the sacredness of the holy day. The ensemble returned to traditional works with the world renowned “Shchedryk” by Leontovych.

Concluding the concert was “Dobryi Vechir, Tobi, Pane Hospodariu,” with the attendees joining the ensemble to sing this piece.

Concert-goers, some of whom traveled from Connecticut, the Boston area and Aquidneck Island to enjoy this musical bounty, expressed their gratitude to Mr. Kuzma and Yevshan with prolonged applause. The closing remarks by Msgr. Golemba reiterated this appreciation.

The Yevshan Ukrainian Vocal Ensemble, located in Hartford, Conn., draws its members not only from that area but also from Boston and Worcester, Mass. The ensemble has performed throughout New England, in New York, Pennsylvania and the District of Columbia.

The parish of St. Michael the Archangel is in its second century of serving the faithful in Rhode Island and central Massachusetts. It also serves the world by streaming the divine liturgy live over the Internet. On most Sundays, the Ukrainian language liturgy starts at 11 a.m. Eastern time (to participate, visit the parish webpage at http://www.stmichaelsri.org/ and click on the “Live Broadcast” link).