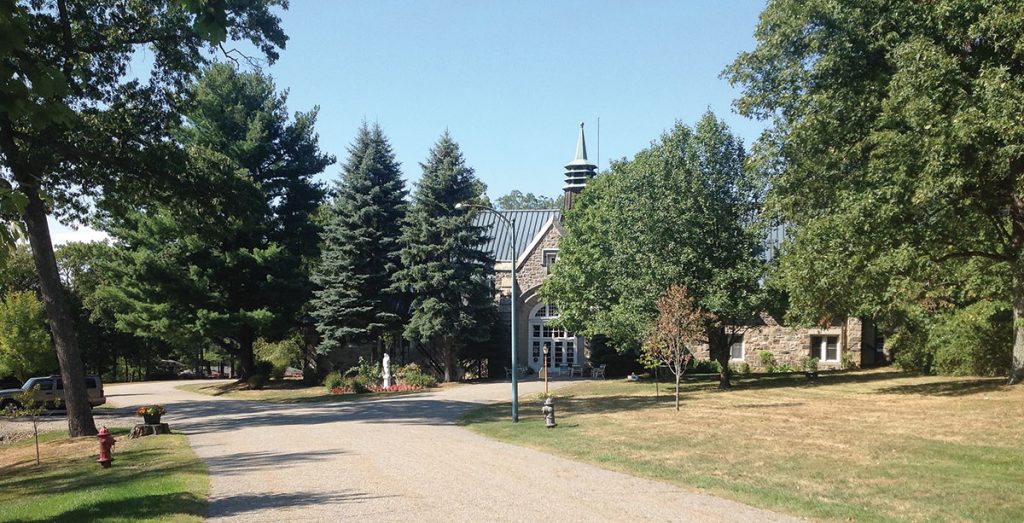 Roman Czajkowsky
A view of the grounds of St. Joseph Adult Care Home.

SLOATSBURG, N.Y. – The scenery is stunning: 265 acres of green meadows and rolling hills. In the distance, deep valleys and haze-tinged mountains. A smattering of stately dwellings built of thick, grey stone – an image straight out of England’s countryside.

A mini-Downton Abbey, perhaps? Not a far-fetched vision. You’ve just entered the setting of St. Joseph’s Adult Care Home, an accredited temporary or long-term residential care facility located in Sloatsburg, N.Y., that is unique to our Ukrainian American community.

Although it will celebrate its 75th anniversary in 2017, it remains little known. But with the population of seniors growing, many living alone without help, as well as rising healthcare costs, St. Joseph’s recent announcement of a plan to expand deserves greater attention, and support, from our community.

Owned and operated by the Sisters Servants of Mary Immaculate, a religious congregation of women founded in 1892 in Ukraine, St. Joseph’s is special in many ways.

Not the least for its location: The property on which it sits was formerly part of an estate owned by the great-grandson of Alexander Hamilton, a founding father of the United States and its first secretary of the treasury. The Sisters Servants of Mary Immaculate purchased a portion of the current property in 1941, and set out to renovate the buildings, among them a former carriage house and stable for horses that now houses St. Joseph’s.

Adult care is just one of their ministries, which include education and comforting the sick. Besides offering a retirement home, the sisters ran a private Catholic girls’ boarding high school, now closed, from 1944 to 1978. The grounds also house the grand St. Mary’s Villa, a venue for popular retreats, as well as seminars and meetings. Other landmarks include a meditation garden and a grotto modeled after the one in Lourdes, France.

It’s fair to say that St. Joseph’s, a non-profit adult care home licensed by New York State, is distinctly different from the more typical impersonal facilities around the country. Talk with residents, their family members or visitors, and you’ll consistently hear that St. Joseph’s offers a safe, caring and loving environment.

“Each resident is treated as a member of one’s family,” reads a typical letter received by St. Joseph’s. “There is always an activity or event in the house that is inclusive of all. Celebrations abound for each and all, making the house joyous and cheerful… Encountering a resident, one can see they are comfortable, happy and peaceful.”

On my visits to St. Joseph’s, I frequently heard people describe it as “like your own home.” The personal aides I met, such as Monique, Antonina, Elba, Nancy, Millicent and Mila, contribute much to the family atmosphere. Good-natured, quick to laugh, tender and patient, they spread good cheer and are attuned to each resident’s individual needs.

You don’t have to be Ukrainian to love St. Joseph’s. Its admission policy is non-discriminatory, and the home caters to people of any ethnic background or religion, male or female. Currently, half of the residents are Ukrainian, though the proportion can vary depending on availability of rooms and the waiting list.

“It’s like our churches,” explains Sister Michele Yakymovitch, the administrator of St. Joseph’s Home. “Our ‘Blazhenishyi’ [the Church’s patriarch]said to welcome everyone to our churches.”

At a time of soaring adult care costs, St. Joseph’s is also eminently affordable. While similar adult care facilities, including non-profits, may charge as much as $6,000 or more a month, St. Joseph’s residents pay less than $2,000 – $1,900 for a room with private bathroom, $1,600 for a room with shared facilities. A resident with an income of under $2,000, including Social Security payments, can apply for Supplemental Security Income (SSI), which then pays St. Joseph’s $1,234, and gives the SSI recipient $213 in pocket money. To be sure, with its 31-room capacity, the waiting time for an opening can be long: Currently, all rooms are filled and about a dozen applicants are on the waiting list.

Because the facility lacks an assisted living license, it can only function as an adult care home, restricting it to the care of residents who are ambulatory and capable of self-care. By law, the home also cannot provide certain basic health services that are often crucial to an aging population, such as administering oxygen or injections, or providing wound care. Consequently, residents need to be taken to an outside facility for such care.

Enter Sister Michele. A no-nonsense, energetic and determined dynamo, she is the key driver behind St. Joseph’s push for expansion to assisted living and additions to the existing building that would bring the total of rooms from 31 to 50.

“We’re seeing more and more elderly coming to St. Joseph’s with health issues such as dementia or Alzheimer’s, and the difficulty of children, working and not being able to care or afford care for their parents, but our qualification as adult care does not meet some of their needs because they need the next level of care,” she explains. “It was the state inspectors themselves that almost gave us an ultimatum, they said there are a few people we have here that either have to be transferred, or we need to change our license to the next level of care.”

With an assisted living license pending and a fund-raising drive under way, the Sisters Servants’ aim is twofold: allowing the elderly as they age to move from one level of care to another in the same environment that they have come to call home; and to build an addition to the existing residence. The expansion plan calls for increasing the number of bedrooms with private baths, offering more spacious rooms that would allow husbands and wives to stay together, and adding other amenities, such as expanded dining facilities, an extra nurses’ station, a sitting room for guests, storage areas, a mini-kitchen, a garden area and additional parking.

But with an estimated project cost of $6 million, the dream of Sister Michele and her fellow sisters remains, at least for the time being, elusive. So far, only $500,000 has been raised, with much of that money already committed to architectural plans and initial ground preparations. Still, Sister Michele remains undaunted. To build support for the assisted living license and for financial help, she’s knocked on the doors of politicians, clergy, doctors and many more.

Bishop Paul Chomnycky of the Stamford Eparchy of the Ukrainian Catholic Church is among the strongest advocates for the expansion plan, arguing that it “has the potential to improve the life of many of the senior members of our Ukrainian community” and would fill “a glaring need in our Ukrainian American community, especially as the number of seniors continues to grow.”

Major financial support, a $50,000 initial donation, has also come from Self Reliance New York Federal Credit Union. According to Sister Michele, the gift came with the promise to contribute more “as soon as the hammer hits the first nail.”

But Sister Michele has set no deadline for her dream. “The architects and builders hoped that we could start [building]when the frost goes away and the ground thaws,” she says. “But I guess I’m a crazy dreamer and still think that it’s possible.” With a twinkle in her eyes, she confesses: “I even did a stupid thing – well, I’m a dreamer – I wrote to some famous movie stars who live in New York City to interest them in our project, but none of those letters came back.” She adds with a chuckle: “But I forgot that they all have secretaries, press representatives,” implying that her letter most likely went straight to the wastebasket.

This writer’s mother, who will turn 97 in a few months, has been a resident of St. Joseph’s for the past year and a half. It was a choice she made, and was also supported by her healthcare professionals. It’s likely that in time she will return to her family’s fold should she become too frail to stay on. Regrettably, it’s an option that may not be available to those with no family or means of support.

The nationwide Ukrainian diaspora and American social and philanthropic organizations should be made aware of what St. Joseph’s offers. The much-needed monetary contributions will enable the home to expand and give many more seniors the ability to live out their golden years in a loving and dignified assisted care environment.

For the sake of our Ukrainian community’s elderly, and given the deplorable lack of other elderly care facilities within our community, let’s help make Sisters’ Servants of Mary Immaculate dream come true.