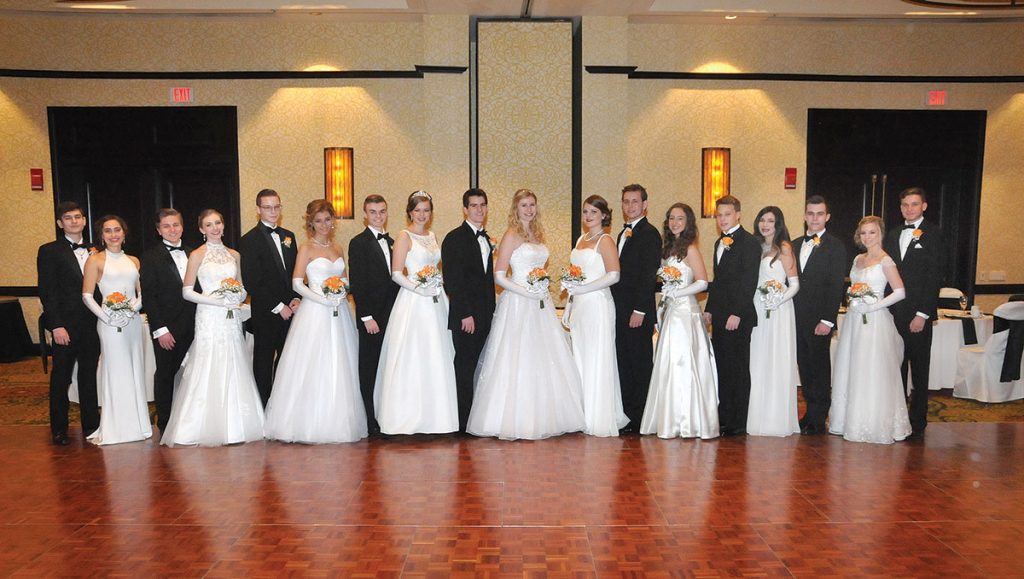 TROY, Mich. – At the 49th Winter Ball and Presentation of Debutantes, organized by the Detroit chapter of the Ukrainian Engineers’ Society of America (UESA), the Detroit-area Ukrainian community welcomed its finest and most promising young members to the status of responsible, patriotic Ukrainian adulthood. The elegant event was held on Saturday, January 30, in the Grand Ballroom of the Troy Marriott Hotel.

Natalia Lewyckyj, president of the Detroit chapter of the UESA, had the privilege of welcoming the guests and introducing the master of ceremonies for the evening, Marko Lawrin. In her opening remarks, Ms. Lewyckyj shared the incredible historic role of the Detroit Winter Ball in the very fabric of the local Ukrainian American community: it has welcomed over 470 debutantes – many of whom today are among its greatest organizational, business and parish leaders – to Ukrainian society in Detroit since 1959. The Winter Ball continues to be a valuable opportunity to bring the community together and to show our youth that their role within the Ukrainian community is well-recognized and warmly welcomed.

This celebrated event, nearly a year in the planning, had tremendous support from the local community and those who traveled long distances just for the occasion. Over 250 guests gathered at the Troy Marriott for cocktails and hors d’oeuvres served in the elegant foyer, followed by the presentation of the debutantes and dinner in the expansive Grand Ballroom.

The presentation was conducted by the master of ceremonies, Marko Lawrin, who formally introduced the debutantes to the community, sharing their highest academic achievements, remarkable artistic and athletic talents, and determined aspirations for the future.

Following the formal introductions, the evening’s festivities began with the debutantes gracing the dance floor for the first dance with their escorts. The elegant presentation, beautifully choreographed by Dr. Christina Korduba Zachar, continued as the debutantes proceeded to dance with their fathers and present their mothers with long-stemmed roses, an emotional expression of their sincere love and gratitude for all that they had done for them.

The formal presentation of the evening’s events concluded with a joyous toast to the debutantes, who were greeted with resounding applause. Mr. Lawrin addressed the debutantes with a congratulatory message that underscored how important it is that the debutantes realize their boundless potential, assume leadership roles in the Ukrainian community and always keep the patriotic love for Ukraine alive in their hearts. As the guests sang an emotionally charged rendition of “Mnohaya Lita,” the ceremonial acceptance of the debutantes into the community was completed.

Mr. Lawrin then invited the Very Rev. Varcilio Basil Salkovski, OSBM, who made a special visit to Detroit just for this occasion, to lead the prayer before dinner. His home parish is the Nativity of the Blessed Virgin Mary in Palos Park, Ill., and he has recently been elected to the position of provincial superior in the Order of St. Basil the Great.

The festivities continued after dinner, as guests were brought to their feet by the lively music of the Ukrainian band Klopit from Chicago. The evening was thoroughly enjoyed by all. The dance floor was crowded up to the very end, serving as the showplace for all sorts of dances and traditional Ukrainian dancing acrobatics during the “Kolomyika.”

As readers may have noticed, this writer was among the escorts who had the honor of being asked to take part in this incredible event, as well as someone who also worked behind the scenes on the event planning committee. Thus, I am able to wholeheartedly attest to the emotional power, Ukrainian patriotism and genuine camaraderie that this incredible event evoked in all of us who participated.

Among us we have forged a tremendously strong bond, united chiefly by our common identity as patriotic Ukrainians. We are young, energetic and just beginning to realize the possibilities of what lies ahead, but we already have our sights set on the future as well-educated professionals with virtually boundless aspirations. I know many of us have a desire to go to Ukraine and work to usher in a new era: to advance medicine, industry, economics and education in our ancestral homeland. It is a calling that many of us will be able to answer.