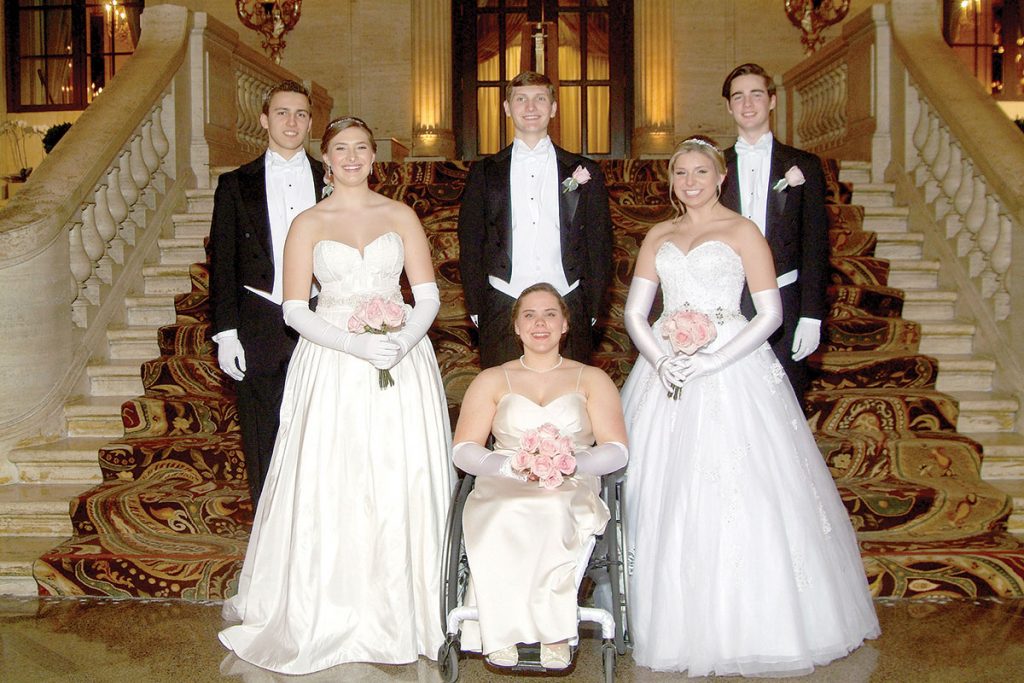 CHICAGO – The Illinois Branch of the Ukrainian Medical Association of North America (UMANA-Illinois) hosted its 55th traditional annual Banquet and Charity Ball with Presentation of Debutantes on January 23 at Chicago’s historic Palmer House in the heart of the downtown “Loop” area.

While the East Coast was caught in the midst of a paralyzing snowstorm, the Midwest was spared nature’s wrath. Although several guests were unable to attend, luckily, out-of-town debutantes and their escorts had arrived days earlier.

Planning and preparation for this annual event began months ago leading to a memorable and successful event for all. Back in November, the debutantes attended a mother-daughter luncheon, where they began planning the details of their debut.

The stunning ballroom was decorated with lighted centerpieces that appeared to reach for the lofty ceiling. Guests and friends greeted each other warmly throughout the cocktail hour. Although there were only three debutantes this year, close to 275 participants were seated in the stunningly ornate and elegantly decorated ballroom. Over 200 of their friends and family lined the balcony to view the presentation and later attend the ball.

The debutantes, on the arms of their parents and family, opened the formal program with a grand entrance into the ballroom. Dr Arkadiush Byskosh, president of UMANA-Illinois, presented the three accomplished, beautiful and intelligent debutantes to Chicago’s Ukrainian community. The debutantes bowed charmingly and gracefully as they were introduced along with their proud parents and escorts.

The debutantes were from the Illinois area, as well as from New York state. The young ladies and their escorts had begun practicing their opening waltz months in advance. The resulting intricate and beautiful dance program under the choreography of Roxana Dykyj-Pylypczak with help from Adriana Striltschuk-Karawan showcased their creativity and expertise. Ability and determination overcame any visible disability through the commitment of both the parents and the young men and women. Debutantes, in their flowing white gowns and holding their pink bouquets, danced elegantly and effortlessly to the sounds of Strauss waltzes, first with their fathers and then with their escorts.

Dr. Byskosh welcomed the debutantes, their parents, escorts and guests, who came from all over the United States and Canada for this charity ball. He thanked them for their continuing support and participation. The consul general of Ukraine, Larysa Gerasko, also extended her warm wishes to the new members of the Ukrainian community. Dr. Borys Buniak, president of the UMANA National Office, extended his greetings and thanks for the support of the Foundation of the Ukrainian Medical Association of North America.

Lida Buniak and Konstantin Babczenko, speaking on behalf of the proud parents, warmly addressed their daughters, wishing the debutantes well in their future endeavors both in their Ukrainian and American community life. All three debutantes spoke next, thanking their parents for their unwavering support and love, as well as thanking the sponsors and guests for their contribution to the memorable evening. Each debutante then presented her mothers with a rose in gratitude for her hard work and commitment.

The more than 200 guests, both young and old, arrived after dinner and danced the night away to the sounds of Chicago’s Klopit band. Later in the evening, the guests, debutantes and escorts all participated in the anticipated traditional folk dance, the “Kolomyika.” The debutantes were seen on the dance floor in their flowing white gowns performing beautifully choreographed “Kolomyika” moves that lasted close to an hour. The debutantes and their families celebrated well into the night amidst fine music and friends.

Traditionally, debutante balls help raise funds for charity. This year, the proceeds from this charitable ball will benefit the UMANA Foundation’s Ukrainian Language Pillbox project. The success of the zabava will allow the foundation to supply 5,000 free Ukrainian language pillboxes to hospitals and seniors in Ukraine, as well as in the U.S. and Canada. Only with the continued support of many generous donors could projects like this be accomplished.

The 2016 organizing committee included many volunteers. Special thanks went to Drs. Arkadiush and Magda Byskosh, Dr. Diana Iwanik, Marta Kozbur, Dr. Theresa Kuritza and Larissa Matusiak. Their dedicated efforts resulted in an imposing and enjoyable event for all involved.

All are invited to join UMANA-Illinois in two years (2018) at the next debutante ball.