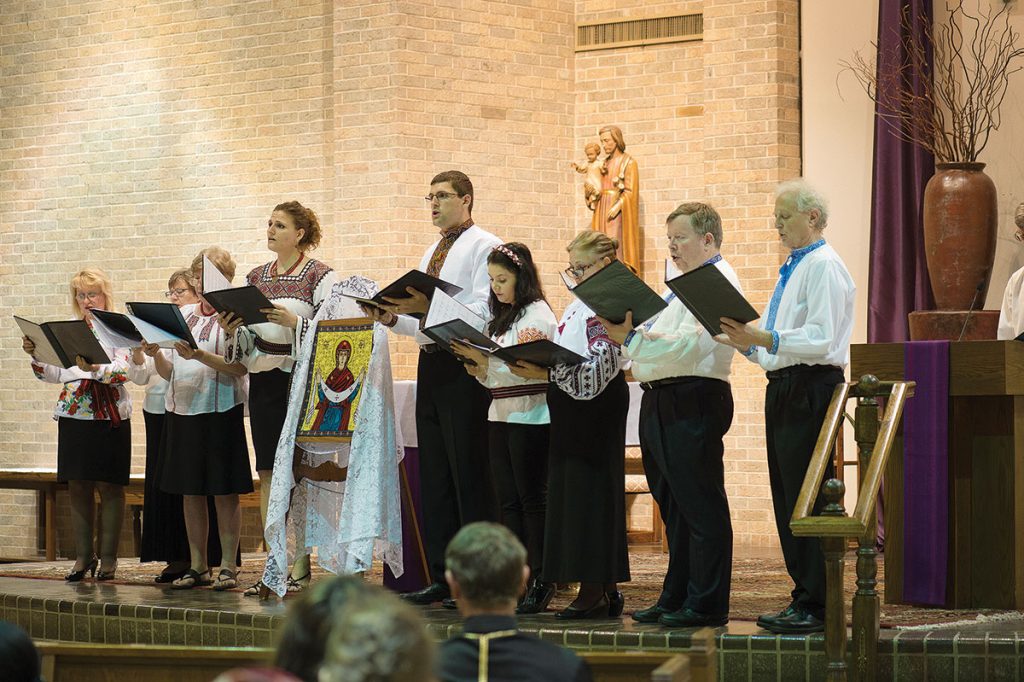 KC in Houston
The Pokrova choir sings at St. Justin Martyr Catholic Church during a fund-raiser for Knights of Columbus councils in Ukraine.

Council 8293 members read in the December 2015 edition of Columbia, the monthly magazine of the Knights of Columbus, an article about their brother Knights in Ukraine, which spoke to all of their good works being done for the people of Ukraine. Based upon this article, Council 8293 decided to host a fund-raiser and sought the support of St. Justin’s pastor, the Rev. Paul Chovanec. A dear friend to Houston’s Ukrainian community and especially to Protection of the Mother of God (Pokrova) Ukrainian Catholic Church, Father Chovanec gave his enthusiastic support and contacted the Rev. Mykola Dovzhuk, pastor of Pokrova to plan the event.

The evening began in church with Father Chovanec providing the introduction to the evening events and a brief review of the current situation in Ukraine. Eugene A. Kuchta, Pokrova parishioner, provided a review of the Knights of Columbus in Ukraine, from their invitation by Cardinal Lubomyr Husar in 2005 to their current status.

Pokrova’s choir, under the director of Nestor Dub, then performed seven liturgical hymns in Ukrainian before the altar at St. Justin’s with the Pokrova icon prominently displayed. Mr. Kuchta provided an English description of each hymn to the audience.

Prior to the last hymn, Father Chovanec and Council 8293 spoke to the audience requesting donations for the councils in Ukraine. Father Dovzhuk concluded this portion of the evening by saying a few words and leading all in bilingual prayers of “Our Father” and “Hail Mary.”

The evening continued into St. Justin’s parish hall, where those in attendance were treated to Ukrainian pastries made by parishioners from Pokrova and a performance by Houston’s Trepet Dancers. Donations were requested for the councils in Ukraine from those in attendance.

By coincidence March 11 is the Rev. Chovanec’s birthday. A special birthday cake was prepared by Eugenia Balaban and presented by the Rev. Dovzhuk with “Mnohaya Lita” and “Happy Birthday” sung by Pokrova’s choir and all in attendance.

All donations received from the evening events are being sent from Council 8293 to Ukraine by way of Knights of Columbus headquarter office in Connecticut.