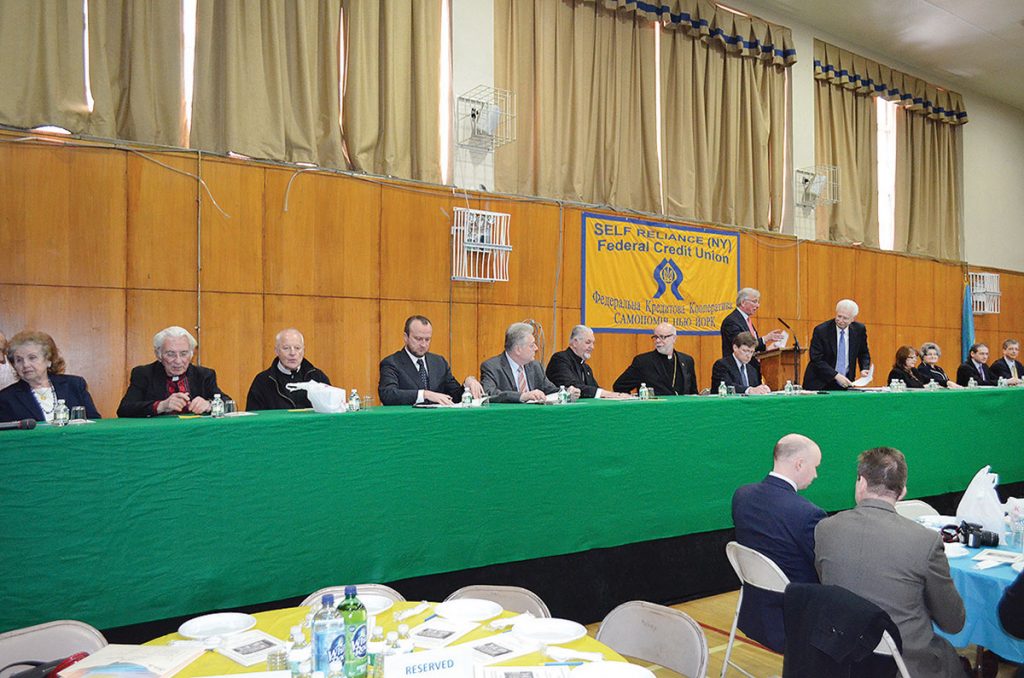 The chairman of the credit union’s board of directors, Stefan Kaczaraj, opened the meeting by welcoming all members and honored guests., and invited Bishop Paul Chomnycky, Ukrainian Catholic eparch of Stamford, Conn., to bless the gathering.

President and Chief Executive Officer Bohdan Kurczak then took over the running of the meeting. A moment of silence was observed in memory of those who had passed away in 2015. The board’s secretary, Andrij Juzeniw, then read the minutes of the previous annual meeting.

Mr. Kurczak presented the report of the board of directors and management for 2015, noting that Self Reliance New York ended the year with $1.159 billion in assets, which is an increase of $71.4 million (6.6 percent) from 2014. It was, he said, yet another year of record financial results, as assets, deposits, loans, capital net income and membership all surpassed the previous year’s levels.

Self Reliance considers itself an integral part of the Ukrainian community, therefore it continues to generously support its members’ initiatives and the Ukrainian community’s financial needs, contributing to religious, cultural, humanitarian and youth organizations, as well as scholarly institutions. In 2015 alone, the credit union made $1.5 million in donations to such entities.

Concluding his report, Mr. Kurczak thanked members of the board of directors, management, credit union committees, employees and, especially, members. Those comments were greeting with a hearty and heartfelt round of applause.

The credit union’s president then introduced the honored guests and members of the board who were seated in the meeting’s presidium. Greetings to the annual meeting were delivered by Ambassador Volodymyr Yelchenko, permanent representative of Ukraine to the United Nations; and Consul General Igor Sybiga and Consul Denys Semenovych of Ukraine’s Consulate General in New York.

Next on the agenda was the election of two members to the credit union’s board of directors. Nominating Committee Chair Orest Glut recommended the nominations of Mr. Kaczaraj and Adam Hapij, whom those present re-elected to three-year terms of office.

The meeting concluded with proposals and comments from the community. Many representatives of Ukrainian institutions, organizations and artistic ensembles came up to the microphone to express thanks to the credit union for its generous support and offer best wishes for the continued success of Self Reliance New York, whose goal-oriented work during the course of 65 years has made it a true pillar of Ukrainian American community life.

The membership meeting was concluded with a prayer. Afterwards, all attendees enjoyed a special luncheon.