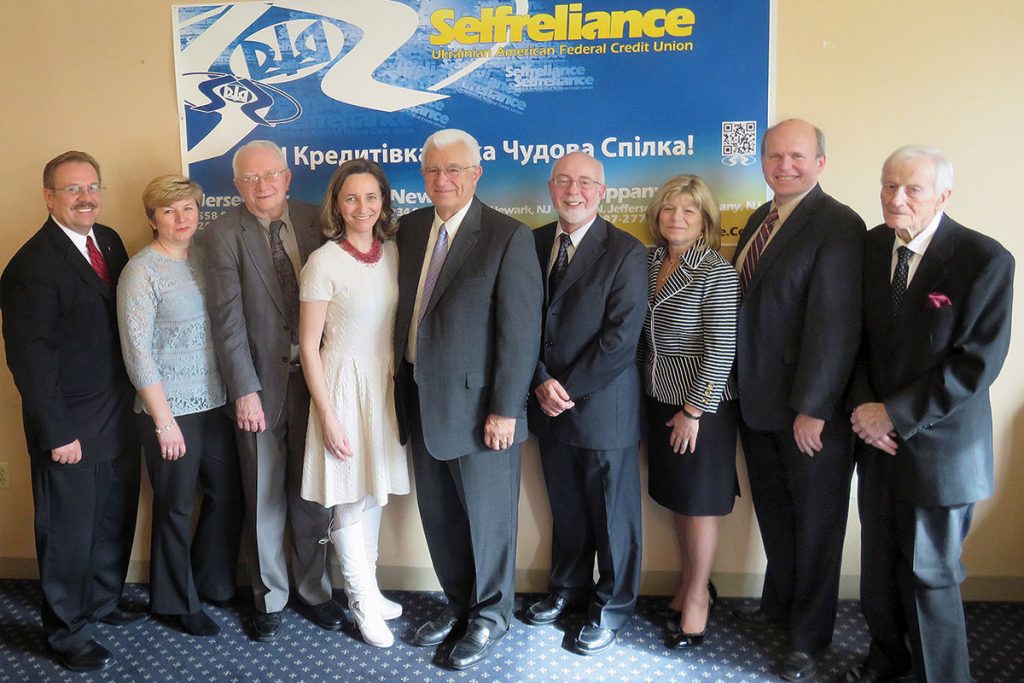 CHICAGO – The 65th annual meeting of the membership of Selfreliance Ukrainian American Federal Credit Union (SUAFCU) took place Sunday, March 20, at the credit union’s home office in Chicago. The meeting was simulcast in New Jersey, at the Ukrainian American Cultural Center of New Jersey in Whippany, with the exception of the community greetings, which were presented separately to save time.

In New Jersey, the meeting was called to order by SUAFCU Board Vice-Chair Ihor Laszok. He introduced the Rev. Stepan Bilyk, pastor of St. John the Baptist Ukrainian Catholic Church in Whippany, who blessed the assembly and thanked the credit union for its ongoing support of the parish. This was followed by greetings and expressions of gratitude from community organizations, including representatives of Ukrainian National Federal Credit Union in New York, the Ukrainian National Home in Jersey City, the Ukrainian Congress Committee of America, various Ukrainian schools, youth organizations and sports associations, dance ensembles, cultural organizations and parishes.

Once the cameras were turned on in both locations for the simulcast, the chairman of the Board of Directors, Michael R. Kos, called on the Ukrainian American Veterans (UAV) for the posting of colors. Renditions of the national anthems of the United States and Ukraine, as well as “God Bless America,” followed.

Chairman Kos then invited John Steciw, representative of the UAV Post 32 of Chicago, to address the assembly. Mr. Steciw recognized SUAFCU CEO Bohdan Watral and Selfreliance Foundation President Oresta Fedyniak with a special medal commemorating the dedication of the veterans monument at St. Andrew Ukrainian Orthodox Cemetery in South Bound Brook, N.J., and a certificate of appreciation for their continued support of the UAV and their various endeavors.

Ukraine’s Consul General in Chicago  Larysa Gerasko addressed assembly, noting that the credit union has supported just about every Ukrainian community event in the year she has been in Chicago. The diplomat also stated that she looks forward to celebrating the 25th anniversary of Ukraine’s independence this year, in conjunction with Selfreliance’s celebration of its 65th anniversary.

The Rev. Yaroslav Mendyuk of Immaculate Conception Ukrainian Catholic Church in Palatine, Ill., read the invocation. He then greeted all members present at both locations. After an introduction of board and committee members in Illinois and in New Jersey, the chair presented the agenda of the meeting. Board Secretary Victor Wojtychiw read the minutes of the 64th annual meeting. Reports of the credit union’s elected leaders followed.

Dr. Kos reported as chairman of the SUAFCU Board. He spoke of the challenges the credit union faced in 2015, He stated that unemployment has decreased to 5 percent, which is considered by economists as “full employment.” He also stated that the number of U.S.-made cars significantly increased in 2015. The negative news is that well-paid manufacturing jobs have been lost; most new jobs are in the service sector, with lower salaries. The American dream of a home, a car and higher education have become unattainable for many. Average salaries are too low for families to afford college, young people graduate from college with high student loan debt, and yet nearly half of them can only find employment in jobs that do not require a college education. Dr. Kos concluded by stating that SUAFCU was able to end the year on a positive financial note.

President/CEO Watral described the credit union’s 2015 achievements. He confirmed that the financial statements for 2015 validate the credit union’s viability and consistent growth. In 2015 net income surpassed $3.4 million and equity now exceeds a record $95 million, or 21 percent of assets. SUAFCU is proud to be included among the most stable financial institutions in the United States, Mr. Watral continued. Membership increased to 20,213, member shares total $348,666,798, and member loans total $214,765,843. Sound fiscal management brought success at a time when other institutions stumbled, and we maintain our commitment to providing the highest caliber financial services in a professional, caring environment, he concluded.

Mr. Watral then presented the budget for 2016, which was approved as read. As there were no further questions or comments from the floor, Board Chairman Kos ended the simulcast, saying farewell to members in New Jersey.

Community greetings followed in Chicago. Pastors and representatives of various churches approached the microphone to thank the credit union for its support and comment on the benefits of the ongoing partnership between the credit union and the community.

The Rev. Mykola Buriadnyk of St. Joseph Ukrainian Greek-Catholic Church, on whose premises the most active of SUAFCU branches, the Northwest Office, is located, emphasized that the credit union provides not only financial, but also moral support.

Orysia Burdiak, president of the Ukrainian National Credit Union Association, greeted Selfreliance on behalf of the other Ukrainian American credit unions in the United States on its 65th anniversary. Greetings were also extended by representatives of Ukrainian cultural institutions, schools, and youth and community organizations.

Photos of the 65th annual meeting of SUAFCU are available on the credit union’s website, www.selfreliance.com. The website also has links to the SUAFCU annual report and credit union history. For current information, readers may follow SUAFCU on Facebook.