Ukrainian American walks across U.S. to raise awareness for Ukraine 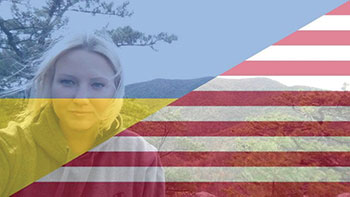 PARSIPPANY, N.J. – With more than 250 miles behind her in her “Walk for Ukraine” cross-country trek across the United States, Maya (who requested that we keep her last name private) is raising awareness about the situation in Ukraine. She began her walk on November 21 at Front Royal, Va., and at her latest update on April 4, she had departed from Kingsport, Tenn.

In speaking with The Ukrainian Weekly, Maya explained that the motivations for such an endeavor came from her own life experiences, including a previous long walk of 500 miles in Spain, which she described as “an incredible experience.” She also spent seven months living in Ukraine, and this walk, she said, was an active way for her to support Ukraine and to raise awareness among the U.S. population.

Maya plans to take a break from her walk beginning in mid-May to attend to family and personal matters, but is scheduled to resume after Labor Day.  From her website (http://mayawalks.wix.com/ukraine), Maya explains her plan for the walk:

“I will walk up to five hours per day during the week (average 12 miles per day), and hopefully cover more distance during weekends. I’ll try to get in one rest day a week, too. If there are big distances between towns, I will have to take a bus or taxi part way. Still, my intention is to cover most of the distance on foot.”

“I had no idea it would move so many people, including people from Ukraine, and on social media like Facebook and Twitter,” Maya told The Weekly.

Maya has been interviewed by VIDIA media group in Chicago and Channel 5 in Ukraine.

On her website, Maya explains also why Americans should care about Ukraine:

“1. Russia’s increasingly aggressive behavior shows that it is attempting to regain its previous Soviet status and stature in the world; 2. This threatens the Western world, including Europe, and the U.S. has obligations to come to Europe’s defense against Russia; 3. Having Ukraine as an independent, strong, democratic state would permanently limit Russia’s ability to cause mischief to Europe and its neighboring countries (U.S. allies); 4. If Ukraine succeeds in maintaining its territorial integrity against Russia, rids itself of corruption, and becomes a U.S./European-oriented state, this will create huge stimulus within Russia to rid themselves of the corrupt government suffocating them; 5. Ukraine’s location at the border between Europe and Asia is beneficial for U.S. economic interests seeking ties to the Middle East and Asia; 6. Ukrainians have demonstrated, through two revolutions within 10 years, their commitment to the same values of freedom and human dignity that Americans and Europeans have long recognized as God-given, inalienable rights.”

On her blog on her Facebook page (http://www.facebook.com/walkforukraine/), where readers can keep up to date on her progress, Maya wrote on April 2:

“Today, two awesome and totally unexpected things happened, and
I thought they deserved their own post.

“I was walking down a country road, and I heard someone calling to me. A very nice lady, Peggy Callison, had stopped on the side and she wanted me to come over to her. I went; she handed me earmuffs. She said she had seen me walking and drove back home to pick these up because it’s cold (there is a cold front here, and the weather went back to the low 50s; 10-12 Celcius; and very windy). She asked me if I was the lady walking across America for Ukraine; I said yes. She said she doesn’t trust Putin, and is really mad about what he is doing to Ukraine. Then, she asked if there was anything else she could give me, and asked if I was taking donations. I explained that I’m not explicitly ‘fundraising’ or collecting money for myself personally, but would send postcards to those who want to donate/support (more on this later). She handed me a $20 bill, and said she did not want a tax donation for this.

“Only 10 minutes later, a truck stopped in front of me. A man got out of his car; told me not to be afraid, and asked if I was the lady walking across America for Ukraine. I said yes and he took out his wallet, gave me $40. He said he didn’t want anything and since he stopped in the middle of the road, there wasn’t a lot of time to talk, but I asked him if he had Facebook, and he told me his name was Frank Shelton. I tried looking him up but couldn’t find him. To my surprise and delight, he came back and said he’d accept my postcard offer and handed me his address. He said he knows that Ukraine is going through a tough time right now, and is really happy to help.

“These funds will go to Volunteer Brigade Ukraine – World. On Monday I will send the money to them. I am supporting three organizations, but those that don’t require tax receipts will go to Volonterska Sotnia unless funds become unbalanced (so if I only collect $300, then each of the three organizations will get $100).
They do awesome work (facebook.com/atovs). Check them out!”

Maya is working with UkraineRising.org, Ukrainian Freedom Fund and Volunteer’s Brigade. Donors are to receive a postcard from Maya along her journey.

She also urges supporters to get involved as well: including plugs for Damian Kolodiy’s film “Freedom or Death” about the events during the Euro-Maidan Revolution of Dignity and the Ukraine Today news outlet for people to stay informed.

Maya’s cross-country walk is different from most, as she is also working full-time remotely during the evenings, while she walks during the day. As a Ukrainian American, Maya has been active in the New York Ukrainian community, and has visited Soyuzivka Heritage Center in Kerhonkson, N.Y., and supported the work of The Ukrainian Museum in New York.