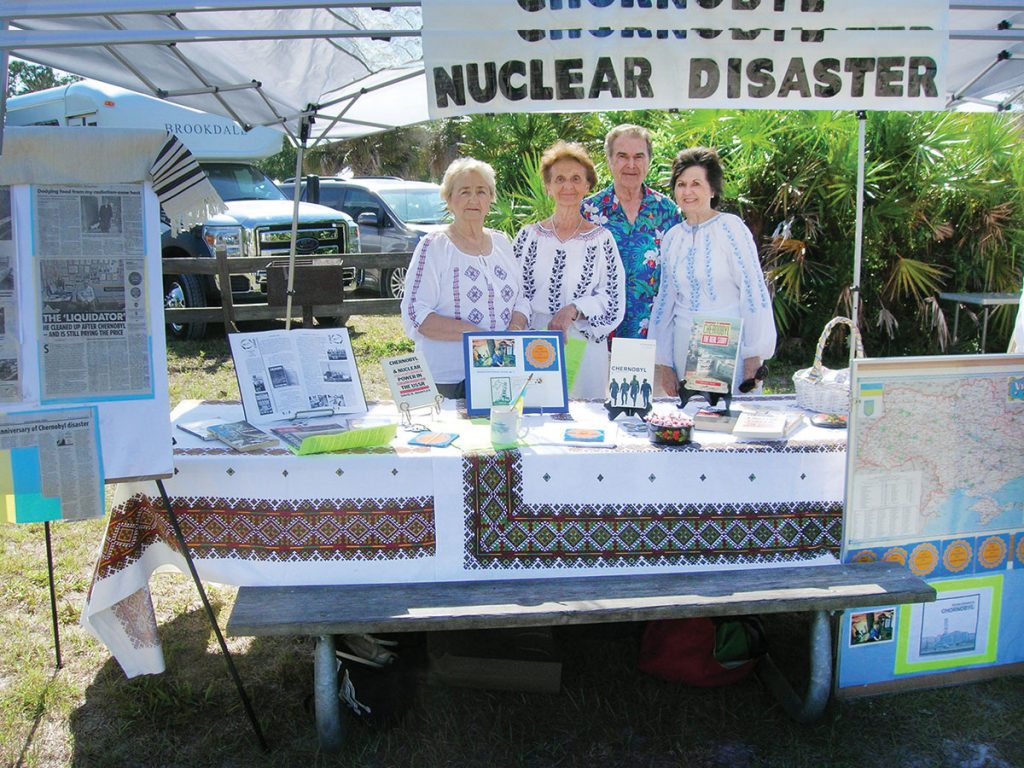 OSPREY, Fla. – The 30th anniversary of the Chornobyl disaster was commemorated during the 2016 observances of Earth Day at Oscar Scherer State Park in Osprey, Fla., on April 23.

Members of southwest Florida’s Ukrainian community Nellia Lechman, Areta Baranows-kyj, Oksana Lew, and Vira and Bohdan Bodnaruk prepared and manned an exhibit of informative literature about the Chornobyl tragedy that happened on April 26, 1986, in Ukraine. Available to visitors were fact sheets about Chornobyl and the present situation in Ukraine (most notably the fighting in the Donbas region). Since many families visit Earth Day with their children, there were candies from Ukraine for them.

The Community Committee of Southwest Florida organized a commemoration of the 30th anniversary of Chornobyl tragedy on Tuesday, April 26, at St. Andrew’s Religious and Cultural Center in North Port, Fla. At 5 p.m. there was a requiem service for the victims of Chornobyl officiated by clergy of the Ukrainian Orthodox Church, the Revs. John Fatenko and Oleh Saciuk, and from the Ukrainian Catholic Church, the Rev. Vasyl Petriv.

After the memorial service everyone was invited to St. Andrew’s “Oseredok” for a short program about Chornobyl. The president of Community Committee, Vira Bodnaruk, briefly related the events that took place at Chornobyl and the terrible aftermath for liquidators of the explosion and the children and adults left uninformed about the dangers of the radiation that was emitted. She noted that thousands have since died as a result; many suffer even today from cancer. Some 2.5 million people were affected by this tragedy. Radiation levels at Chornobyl zone are still very high and make the area uninhabitable for humans. But animals and plants seem to thrive, since there is no human interference there.

The PBS film “Radioactive Wolves, Chornobyl’s Nuclear Wilderness” was shown next, followed by a short trailer, “Epiphany at Chornobyl,” made by Irene Zabytko.

At the conclusion of the program everyone was invited to view an exhibit of publications about Chornobyl.