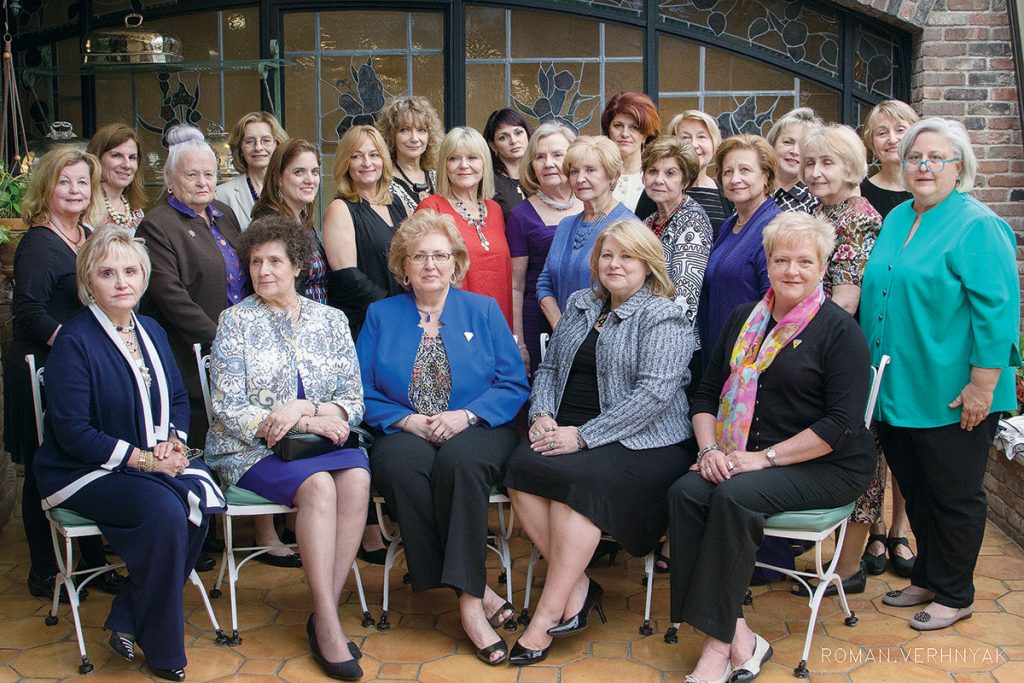 WEST ORANGE, N.J. – More than 100 people from New York, New Jersey, Connecticut and Pennsylvania gathered on May 15 at The Manor Restaurant for an afternoon luncheon benefitting the Ukrainian Catholic University in Lviv.

The Rev. Stepan Bilyk of St. John the Baptist Ukrainian Catholic Church in Whippany, N.J., led the gathering in an opening prayer, and community activist Ihor Zwarycz served as master of ceremonies.

Alex Kuzma, chief development officer of UCEF, in his statement of greeting underscored that that UCU is a “pioneering institution” that has the potential to “transform Ukrainian society.” Mr. Kuzma recognized the major donation of $100,000 by the Ukrainian National Women’s League of America toward the UCU Rehabilitation Center.

Mr. Zwarycz read greetings from Metropolitan Antony of the Ukrainian Orthodox Church of the U.S.A. The UOC-U.S.A. was represented by the Rev. Vasyl Pasakas, pastor of the Nativity of the Blessed Virgin Mary Ukrainian Orthodox Church in South Plainfield, N.J. Others who were recognized by Mr. Zwarycz included Stefan Kaczaraj, president of the Ukrainian National Association and Dr. Michael Lewko, chairman of the board of directors of the Self Reliance (NJ) Federal Credit Union, organizational sponsors of the event; and Michael Hrycak of the Ukrainian American Veterans. The Paslawsky family members were recognized in tribute to Markian Paslawsky, who was killed in action in Ukraine.

Levko and Halyna Mazur were recognized for their major donation of $100,000 to UCU, and an additional donation of $25,000 for the seminary at UCU was announced. Dr. Zenon and Nadia Matkiwsky thanked Mr. Mazur for his donation and his work with the Children of Chornobyl Relief and Development Fund, and a gift was presented to Mr. Mazur from the members of UCEF.

The film “A New Generation for a New Ukraine” walked viewers through a virtual tour of the UCU campus. Following the screening, Mr. Zwarycz reminded the audience that these graduates of UCU are the future leaders of Ukraine. Indeed, they were among the leaders of the Revolution of Dignity.

Prof. Hrytsak of the History Department at UCU spoke about how divisions in Ukraine’s political composition were linked to the choice of social media – Facebook versus Vkontakte. The changes happening today are a “greater shift than in the last 10 years,” the greatest shift prior to the Maidan, and is focused in large cities among its resident youth, Prof. Hrytsak explained. To understand this new reality in Ukraine, you must study this new generation after this latest Maidan, he said. This shift is more generational rather than linguistic (Ukrainian versus Russian).

Prof. Hrytsak commented on the differences between the Maidan of 2004 and the Revolution of Dignity in 2014. In 2004, it was a vertical structure of resistance, while in 2014, it was more horizontal or social in nature. The youth in Ukraine, he said, are among the most educated in the world – on par with Austria or Israel. Values, he added, change with education, and history is not a prison, because people have a choice.

There remain threats and dangers to the young democracy in Ukraine that go beyond Russian propaganda, he added, including widespread unemployment and corruption. The time after the 2004 popular uprising was a squandered opportunity as politicians could not deliver on reform promises, Prof. Hrytsak observed. However, “when a window closes, a corridor opens,” he said.

He also acknowledged the donation made by Maria Moroz in the creation of a fellowship endowment of $150,000 for students from Ivano-Frankivsk Oblast.

Mr. Zwarycz then introduced Dr. Lushniak, who is a retired rear admiral of the U.S. Public Health Service, a former deputy surgeon general of the U.S., and now is professor and chair of the Department of Preventive Medicine and Biostatistics and professor of dermatology at the F. Edward Herbert School of Medicine at the Uniformed Services University of the Health Sciences in Bethesda, Md.

Dr. Lushniak (who was not officially representing the University of the Health Sciences) noted his youth with Plast Ukrainian Scouting Organization and the Lisova Shkola (Forest School), where he made friends with Borys Gudziak, who would later become bishop and a rector of UCU. During their time at camp, the two got to know each other while digging a latrine. Despite such beginnings, Dr. Lushniak added, the two were both on a mission to accomplish great things. Similarly, UCU’s mission is to accomplish great things.

Marianna Zajac, president of the UNWLA, noted the partnership between the UNWLA and UCU, and how the UNWLA worked to establish women’s studies and scholarships at UCU. The $100,000 gift, she said, is to be used for the Mental Health Institute at the UCU Rehabilitation Center. She also noted that the UNWLA would donate an additional $7,000. Thanks to these gifts, UCU will help lead mental health efforts “to bring hope and healing” from psychological trauma for both families and soldiers.

Dr. Lushniak thanked Ms. Zajac and the UNWLA, and explained his experience in Monrovia, Africa, where he assisted in the treatment of the Ebola virus epidemic in Liberia. Working in a secure military compound – with an eight-foot-high tarp-covered chain link fence topped by barbed wire – limited the view of the countryside of the areas where these efforts were supposed to be helping. Some of the team members decided to build a lifeguard chair in order to be able to see beyond the tarp-covered fencing and the country that they were helping. The lesson underscored by Dr. Lushniak: “We should not limit our vision.”

Mr. Zwarycz acknowledged the event’s organizing committee members, and Mr. Kuzma recognized the major donors for the event,  the collaboration between UCU and the UAV in treating those affected by the war in Ukraine, as well as the work of the Ukrainian Medical Association of North America and UCU in these coordinated efforts.

A benediction was offered by the Rev. Pasakas to officially close the event.

A light hors d’oeuvre reception preceding the luncehonfeatured a performance by the Leshchuk sisters – Ulana and Kalyna – who sang and played bandura in a duo.