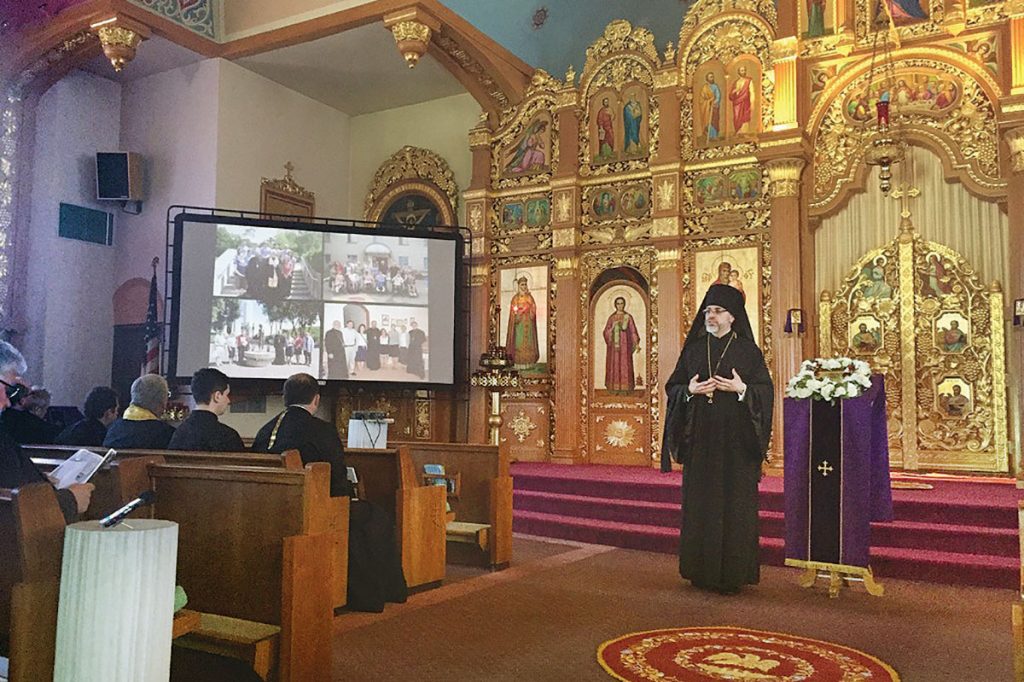 PARMA, Ohio – On Sunday, April 24, the greater Cleveland Ukrainian American community commemorated a tragedy that befell Ukraine and the whole world 30 years earlier, when an explosion and release of radiation occurred at the Chornobyl nuclear power plant.

The remembrance, organized by the United Ukrainian Organizations of Ohio, the Ukrainian Orthodox Church of the U.S.A. and St. Vladimir Cathedral Parish, began with a prayer service for the living and deceased.

The prayers were led by Bishop Daniel (UOC-U.S.A.), Bishop Robert Moskal (retired bishop of the Ukrainian Catholic Church) and 10 local Ukrainian Orthodox and Catholic clergy. Responses were sung by the Cathedral Choir of St. Vladimir directed by Markian Komichak. The pastor of St. Vladimir Cathedral, the Very Rev. John Nakonachny, welcomed those present and noted the many efforts accomplished by the local Ukrainian community.

Introductory remarks about the accident in Chornobyl and the supportive response of the local community was given by the president of the community organizations, Marta Liscynesky Kelleher.

A musical interlude of religious hymns, unique to the Ukrainian Eastern Church tradition, was performed by the Ukrainian Female Vocal Ensemble Zorya under the artistic direction of Natalia Basladynsky Mahlay.

The theme of the commemoration – “We Remember and Support” – was emphasized by Bishop Daniel’s presentation on the missionary work of the UOC-U.S.A. to the handicapped children of Ukraine.

The program was concluded by brief comments of gratitude by the coordinator of this event, the Rev. Protodeacon Dr. Ihor Mahlay, director of the Office of Christian Charity, who acknowledged all the community charitable efforts during these last 30 years.

Present during this commemoration was an icon from Ukraine called “The Chornobyl Savior” that was specially commissioned in remembrance of this tragedy and the many innocent victims.

Though this event was free of charge, over $6,000 in donations were collected for the local Fund to Aid Ukraine, which will be forwarded to the Church’s Orphanage Fund benefiting handicapped children.