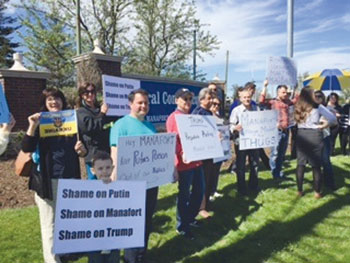 The protesters urged Mr. Trump to fire Mr. Manafort in light of his sordid track record as image-maker and influence peddler for tyrants and war criminals. The protesters focused their dissent on Mr. Manafort’s role as the former adviser and campaign strategist for Viktor Yanukovych, the disgraced former president of Ukraine, widely seen as a pro-Russian puppet of Vladimir Putin.

“It’s well known that Manafort worked for Yanukovych from 2005 up until the very end of the Maidan uprising in 2014,” said Borys Krupa, one of the spokespersons for the group. Holding a sign that read “Manafort’s client killed 104 heroes in cold blood,” Mr. Krupa said, “Manafort needs to be seen as a truly dangerous influence. This is a man that worked for Yanukovych and in the interests of Vladimir Putin. It’s very disturbing to think that he would now be influencing the campaign strategy and the foreign policy agenda of the front-runner for the Republican Party.”

On the day before the protest, Mr. Manafort attended the meeting of the Republican National Committee in South Carolina, where he reassured GOP leaders that “the Donald Trump you’ve seen in the primaries will not be the Trump you see in the general elections.”

“This guy Manafort is a master manipulator,” said Sofia Dumanska, an activist from Newington. “We’re already worried about a number of statements that Trump has made in praise of Putin.”

Yuri Burkovskiy added: “At a time when Ukraine desperately needs the unified support of Western nations to resist Russian aggression, Trump is suggesting that NATO is an outdated institution that should be dismantled.”

“We see Manafort as a Trojan horse for Putin,” said Roksolana Luchkan of Wethersfield. “We have to keep him from poisoning America’s political process. He is shaping Trump’s campaign message and his policies in a way that favors Russia and undermines not only Ukraine’s independence, but the security of Europe and the entire world.”

Ms. Luchkan served as an election observer during the 2004 presidential election in Ukraine when Mr. Yanukovych’s Party of Regions used a variety of tactics to falsify results and intimidate voters. Eventually that election was overturned during what came to be known as the Orange Revolution. However, in 2005 Mr. Yanukovych, with the help of Mr. Manafort, re-entered the political arena and eventually was elected president in 2010. Within months of his election, Mr. Yanukovych began a campaign of harassment and intimidation designed to quell dissent and curb civil liberties.

Mr. Burkovskiy noted: “Manafort has no moral values. He has advised many corrupt politicians – from Viktor Yanukovych, to the former Bahamian Prime Minister Lynden Pindling accused of protecting drug traffickers, to Philippine dictator Ferdinand Marcos. So it is obvious: Manafort is just after money. He doesn’t care whom he works for.”

The protesters distributed flyers and press releases as they picketed near the university where they sought to inform the public about the collaboration of Messrs. Yanukovych and Manafort and to expose Mr. Yanukovych’s many acts of treason against Ukraine.

As the protest continued at the busy intersection, representatives from the Polish, Bosnian and Turkish communities joined the crowd, expressing support for Mr. Manafort’s ouster. They expressed concern about Russia’s continuing aggression in Ukraine, and its support of the brutal regime of Bashar al-Assad in Syria and Slobodan Milosevic’s campaign of genocide against Bosnians.

There was symbolic significance in the location chosen for the protest. Activists converged on the busy intersection between Route 9 (Taras Shevchenko Expressway) and State Routes 175 and Paul Manafort Drive, named after Manafort’s father, the former mayor of New Britain.

The Connecticut Ukrainian Coalition has now launched a petition drive, urging Mr. Trump to fire Mr. Manafort and to repudiate his earlier statements praising Mr. Putin. The group also hopes to persuade the Town Council of New Britain to have a street named in honor of the Heavenly Brigade to honor those who were murdered on the orders of Mr. Manafort’s former client.

To obtain copies of the “Dismiss Manafort Petition,” readers may contact ctukrainiancoalition@yahoo.com.