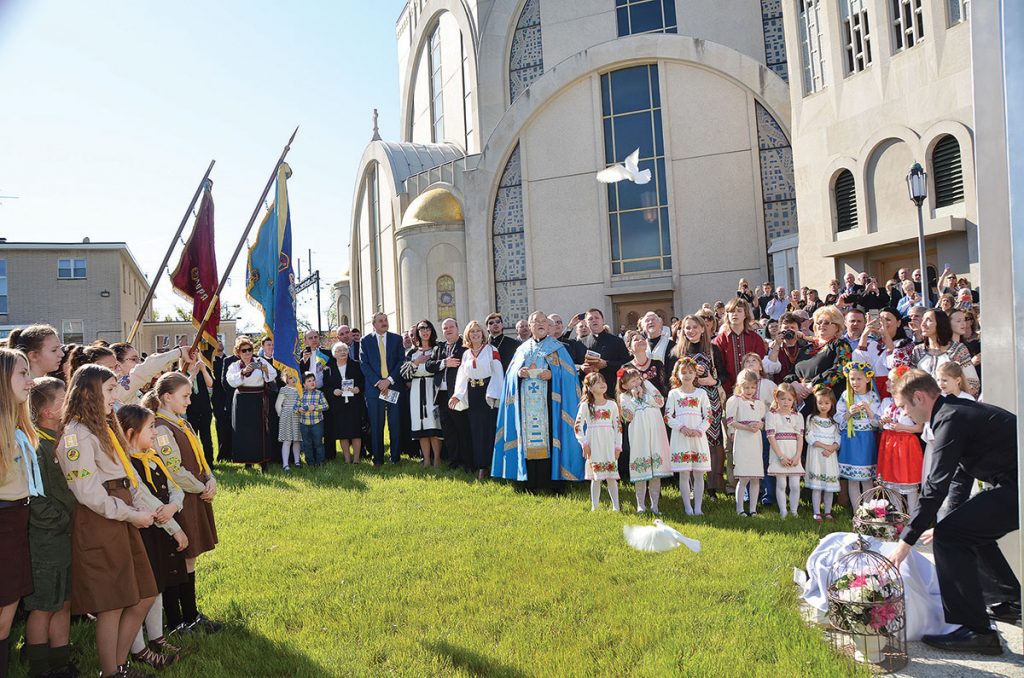 Olha Ivanova
The release of white doves of peace by the cathedral’s bell tower.

PHILADELPHIA – Оn Sunday, April 17, the golden-domed Ukrainian Catholic Cathedral of the Immaculate Conception in Philadelphia hosted the “Pray for Ukraine” event. The solemn commemorative concert and prayer service recalled the 30th anniversary of Chornobyl and focused on the undeclared war being waged by Russia in the east of Ukraine.

The event began with a solemn procession of national flags, as well as organizational flags of Ukrainian youth organizations, followed by a wreath-laying ceremony. Holding candles, children from the Ukrainian Heritage School completed the procession.

The “Pray for Ukraine” event was opened by Ulana Mazurkevich, who stated, “We are gathered in solidarity to mark the tragedy of Chornobyl and to stand with the people of Ukraine in her hour of need.” The chair of the Commemorative Committee of the Ukrainian Community Committee, which encompasses over 24 local organizations, welcomed all the participants and extended a special warm welcome to Valeriy Chaly, Ukraine’s ambassador to the United States and his wife Liudmyla Mazuka.

Students of the Ukrainian Heritage School Anastasia Dyak, Christine Biletsky, Natalia Babychuk, Volodymyr Falendysh, Peter Kryvdiuk and Alexander Hryckowian delivered recitations on the tragedy of Chornobyl and the war in the east of Ukraine. The youngest children, members of the Soloveiky choir, accompanied on piano by Luba Shchuyko, delighted the attendees with their singing.

A call to action was delivered by Yurij Nakonechny, a representative of the United Ukrainian American Relief Committee (UUARC), which since its inception in 1944 has helped Ukrainian refugees, at first those displaced by World War II and now the refugees suffering from the war in the east of Ukraine. Mr. Nakonechny called for the community to come forward and help Ukraine by participating in the many humanitarian programs that the UUARC runs in Ukraine.

Bandurists Yulia Stupin and Halyna Bodnar raised their voices in prayer to the Mother of God, singing, “Through the fields of Ukraine walks the Mother of God.” The melancholy sound of the bandura echoed in the cathedral, adding to the solemnity of the occasion.

The keynote address was delivered by Ambassador Chaly, who stated, “Chornobyl is very connected with the same kind of Soviet aggression we are seeing now, the Russian incursion into Ukraine comes from the same Soviet style of thinking and culture.”

Ambassador Chaly spoke about the loss of life in the undeclared war saying, “the conflict with Russia has killed 2,700 Ukrainian soldiers, wounded more than 9,000 and has caused 10,00 civilian casualties.” He spoke about the need for financial and medical donations to help cope with the consequences of the current conflict. The ambassador expressed gratitude to the Ukrainian American community for its support and solidarity with Ukraine.

At the close of the commemorative concert, Archbishop Stefan Soroka, metropolitan of Ukrainian Catholics in the United States and honorary chair of the event, invited everyone to join in a special outdoor ceremony during which a multitude of doves was to be released. The doves, he said, “are our sign of hope for Ukraine, for peace in Ukraine, for God’s blessing upon the people of Ukraine.” He added, “let us be inspired to advocate for those suffering in Ukraine.”

After the commemorative concert and prayer service, the congregation solemnly exited the cathedral and gathered by the cathedral bell tower, where the Ukrainian Baptist Choir led the faithful in song. Afterwards, to the pealing and tolling of the cathedral bells, white doves were released as a sign of hope for peace in Ukraine.