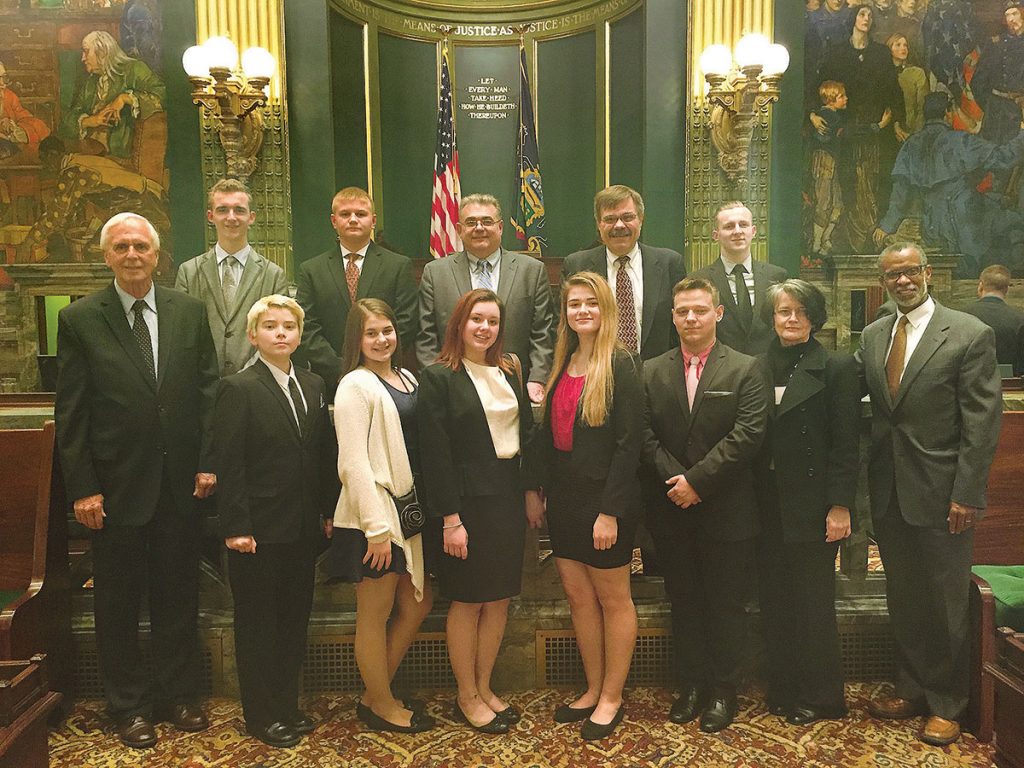 HARRISBURG, Pa. – Spurred to action by events in Ukraine and their participation in the Ukrainian National information Service’s Ukrainian Days advocacy efforts in Washington, a group of Philadelphia-area Ukrainian American students have organized the Young Ukrainian Americans’ Civics and Public Policy Club.

From their opening meeting with Sen. Greenleaf and his counsel, chief of staff and others, through their stay at the hearings of the Senate Judiciary Committee, which the senator chairs, and their attendance at the morning session of the Senate, the club members became acquainted with how legislation is drafted, analyzed, reviewed, discussed and presented for a vote on the floor. Witnessing the opening of the session also gave them an added understanding of the procedural aspects of legislative work.

The club members and their moderators were enthralled by the address to the Senate of Israel’s consul general to the Mid-Atlantic region of the United States, Yaron Sideman. Not only did they appreciate the extent to which all freedom-loving nations must stand together in the worldwide struggle for peace, democracy and human rights, but they also gained an appreciation of the scope and breadth of the Commonwealth’s direct international relations. Specifically, the consul General Sideman thanked the Senate and the Commonwealth of Pennsylvania for the myriad scientific, industrial, technological, educational and civic relationships that were established directly between Israel and the Commonwealth during his tenure.

After this address, Sen. Greenleaf delivered an impassioned speech in support of Ukraine and its people. Sen. Haywood, emphasizing the duties and responsibilities of all citizens, then wove that speech into a magnificent presentation of the club to the Senate. The senators rose and applauded the club members and their moderators.

As the Senate went to recess, the senators invited the club to visit the Senate floor, a hallowed place where so much of America’s and the Commonwealth’s history developed and continues to grow. The visit was then capped by a tour of Pennsylvania’s magnificent Capitol building. Drawing upon their Ukrainian heritage, the club thanked the senators and their staff with a lovely “Mnohaya Lita.”

Many of the Club members, in their private discussions, wondered whether Ukraine was engaging the various states of the union in direct international relations, exchanges, partnerships and associations.

Roman Lehenkyy took special note of the inscription on the wall above the area where the president of the Pennsylvania Senate (currently Lt. Gov. Mike Stack) presides: “Government is the Means of Justice – As Justice is the Means of Peace.”

The club’s next event is a symposium on public policy, advocacy and careers in government that it will present to the Ukrainian Heritage School’s upper classes. Guest speakers will include U.S. Congressman Brandon Boyle, Prof. Robert G. Kaufman, Ph.D., J.D. (professor of public policy at Pepperdine University), and Michael Sawkiw, director of the Ukrainian National Information Service.