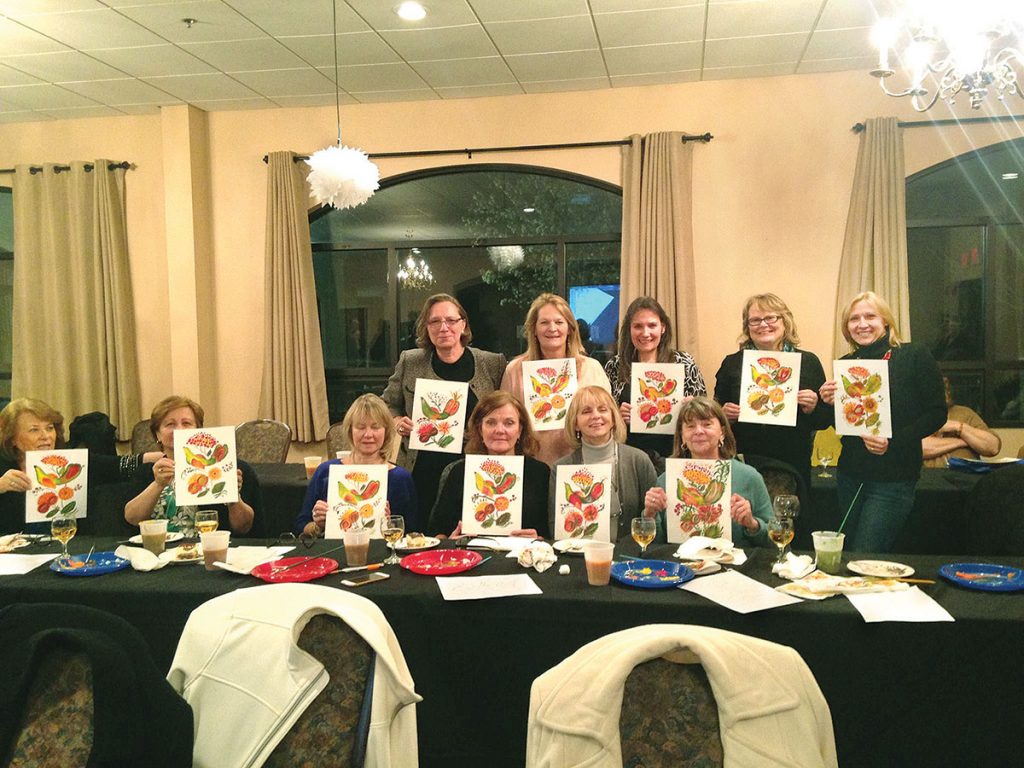 Nataliya Symczyk
Participants of the Petrykivka workshop show off their artwork.

WHIPPANY, N.J. – The Ukrainian National Association (UNA) sponsored a Petrykivka Workshop on April 8 at the Ukrainian American Cultural Center of New Jersey (UACCNJ) as part of its series of fraternal events tailored to providing local communities an opportunity to congregate and learn more about what the UNA has to offer as a fraternal benefit society. The workshop was attended by about 50 participants – a full house.

The event was organized in support of the Arts, Education and Culture Committee of the UACCNJ, which works to the benefit of the cultural center in organizing various events and fund-raisers throughout the year. The workshop’s suggested donation of $30 per person went towards future arts, cultural and educational events at the UACCNJ.

The evening’s instructor, Natalia Lyubytska is a Ukrainian-born artist from Lviv. She graduated from the Lviv University of Art and is a specialist in batik art. Ms. Lyubytska provided a short introduction on the history of the Ukrainian art form of Petrykivka, as well as a step-by-step demonstration on the Petrykivka style of painting and its techniques. Every stroke of the instructor’s brush was projected on a large screen for all attendees to gradually follow and imitate on their own canvases.

The evening’s five-course dinner of small plates paired with various wine selections was arranged by Soyuzivka Manager Nestor Paslawsky and prepared by Soyuzivka’s head chef, Andrey Sonevytsky. Each tasting was introduced by Soyuzivka’s hostess, Marianna Hawryluk, and served by Soyuzivka’s observant and prompt wait staff, exemplifying true Soyuzivka hospitality. With every meticulously paired dish and glass of wine served at their seats, the evening’s new artists were able to truly enjoy everything this special event had to offer.

The Ukrainian National Association has been organizing such events for its membership and local communities for 122 years. In addition to practicing fraternalism and promoting Ukrainian culture, the UNA has provided financial stability for tens of thousands of families throughout its 122-year history by offering quality life insurance and annuity products. Unlike other insurance companies, UNA’s profits go back to supporting its members, their families and their communities.

As was noted at the Petrykivka Workshop, the UNA strongly believes in its motto, “UNA and the Community: Partners for Life!” And with every new member, with every new life insurance policy or annuity, the UNA can grow stronger and do even more for its members, their families and their communities, it was underscored.