Californians commemorate the life of a Ukrainian patriot 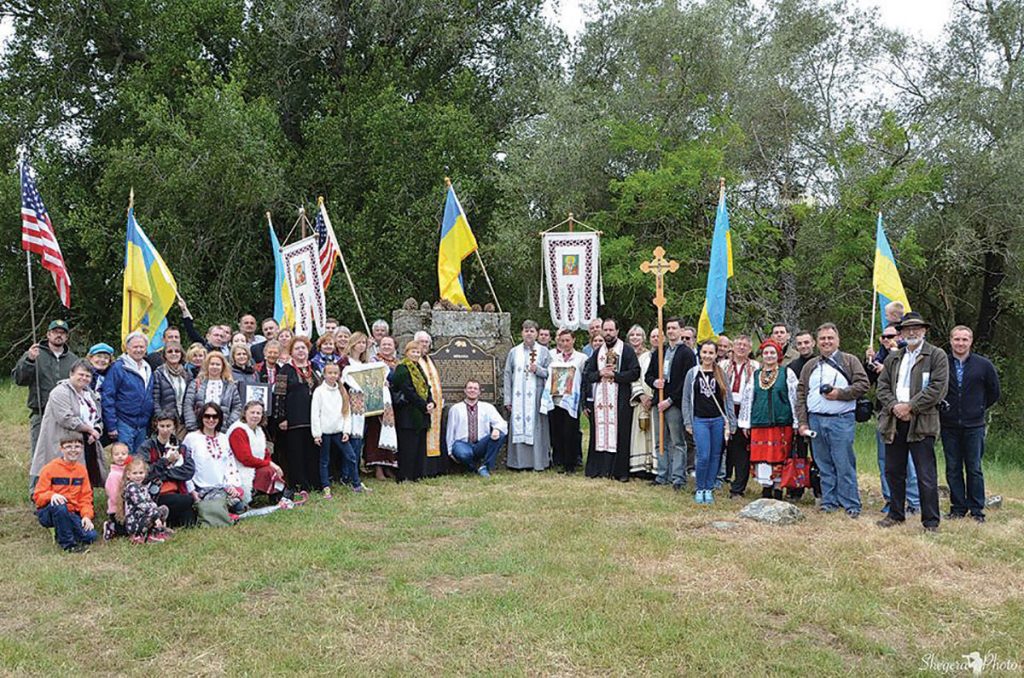 HAYWARD, Calif. — Nearly 150 Ukrainian Americans from all over California gathered on Saturday, May 21, at Garin Regional Park for a panakhyda (memorial service) and celebration of the 100th anniversary of the passing into eternal memory of the Rev. Agapius Honcharenko. The Rev. Honcharenko, the first nationally conscious Ukrainian in the United States, lived with his wife, Albina Honcharenko, on 40 acres of the scenic Hayward hills in the late 1800s and early 1900s, quickly becoming a pillar of the Hayward community noted for his deep spirituality and love of the earth.

The site of his homestead was designated California State Historic Landmark No. 1025 – Ukraina – on May 15, 1999, with a large ceremony attended by many in the community and clergy from the United States and Canada, including Metropolitan Constantine from the Ukrainian Orthodox Church of the U.S.A.

Ukrainian and American flags flew in the mid morning breeze as men and women in traditional Ukrainian attire welcomed guests. The Ukrainian Brass Orchestra from Sacramento, directed by Oleksandr Zhuravel, opened the ceremony with performances of the Ukrainian and American national anthems followed by a customary ancient Ukrainian welcoming with salt and bread by local Ukrainian children and opening remarks from masters of ceremonies Olga Honchariv Vose and Maria Tscherepenko.

Before the panakhyda, guests were treated to performances of traditional Ukrainian songs by Oksana and Sviatoslav Stus, the Koliada Vocal Ensemble conducted by Andriy Khryshtafovych, mezzo-soprano Maria Tscherepenko, and the mother-daughter duo of Julianna Filipenko and Ivanna Taratula Filipenko, as well as special bandura performances from the Bandura Trio of Northern California consisting of Ola H. Oliynyk (Merited Artist of Ukraine), Roman Ritachka and Olesia Ritachka (from Sacramento and Weaverville, Calif., respectively).

Many guests joined in singing familiar songs. As Ms. Tscherepenko shared, “Ukraine is a country of music and dance – it is how we [Ukrainians] celebrate and continue keeping our history and traditions. We are called the singing nation.”

The consul general of Ukraine in San Francisco, Sergiy Aloshyn, gave a moving speech about the example Honcharenko set for current Ukrainian Americans. Norman Fobert of the Hayward Area Historical Society spoke of Honcharenko as embodying the “flavor of Hayward.”

Having been a fugitive and exiled Ukrainian Orthodox priest, Honcharenko embraced his new Hayward community and became a spiritual leader and mainstay of the community. Mr. Fobert spoke enthusiastically of Honcharenko’s unrivaled agricultural skills in the region, his mastery of over 12 languages and his popularity among other residents of the early Hayward community.

Ms. Vose spoke of her father and uncle, the Rev. Honchariv, of visiting Honcharenko’s gravesite in the early years and how they continued the struggle to preserve the site and open it to the Ukrainian American community.

The gravesite is under a large tree on a breathtaking scenic cliff overlooking the Bay Area – a fitting final resting place for a man with a deep love and respect for his land.

The panakhyda and blessing of the gravesites was conducted by all three priests, demonstrating the admiration and deep respect felt for Honcharenko among the entire Ukrainian American community.

A Ukrainian patriot, prominent scholar and champion of freedom, the Rev. Agapius Honcharenko made his home in what is now Garin Regional Park in Hayward, Calif., part of the East Bay Regional Park District.

The homestead and the gravesite of Honcharenko and his wife, Albina, are now a state historic landmark thanks to the efforts of the Ukrainian American Coordinating Council of Northern California (UACC), which won an over 35-year struggle to have the site officially recognized.

Honcharenko owned and lived on the land until his death in 1916. The land was later purchased by the Meillke family, who owned the land until 1991, at which time the East Bay Regional District took ownership. All that remains of the original homestead is the foundation of the chicken house, the couple’s gravesites, the 150-year-old olive trees Albina Honcharenko planted and the grotto (a wind cave set into the cliffs) where Honcharenko held religious services, including weddings and baptisms.

Born in Ukraine in 1832 as Andrii Humnytsky to a prominent Kozak family (descendants of the famous Kozak leader Ivan Bohun), Honcharenko graduated from the Kyiv seminary in 1853. While serving as an archdeacon of the Orthodox Church in Athens, he began writing for political publications in London, describing societal injustices in his native land, Ukraine. Arrested and imprisoned in Constantinople, he escaped into a lifetime of exile as a fugitive from tsarist Russia.

Though times were hard, Honcharenko maintained his faith and was quoted as saying, “Tribulations are my distinctions, poverty – my glory.” At this time he changed his name to Agapius Honcharenko to protect family members still in Ukraine. He traveled throughout much of Europe and the United States looking for a place to call home, befriending many leading world leaders and political figures along the way.

It is documented that Honcharenko was a key influencer of the purchase of Alaska from Russia by the United States and was invaluable in aiding the U.S. government in acquiring the land. From 1868 to 1872, Honcharenko assisted the U.S. forces in Alaska by writing the first English-Russian grammar book while singlehandedly publishing the Alaska Herald, the first English-, Russian- and Ukrainian-language newspaper in the United States. Its first two editions contained the U.S. Constitution, translated into Russian “to enlighten the Muscovites [a reference to former Russian colonists]of Alaska as to their duties and privileges now that they are U.S. citizens.” The Alaska Herald was key in assimilating former Russian citizens in Alaska into American culture.

Having traveled much of the world, Honcharenko and his wife eventually settled in Hayward in 1873 on a 40-acre homestead he named Ukraina Ranch. During that time he welcomed victims of the 1906 San Francisco earthquake onto his land, hosted Ukrainian and Canadian Americans from all over the country and even established an experimental commune in 1902. The Honcharenkos lived on their land in the Hayward hills until Albina’s death in 1915 and Agapius’ death in 1916.

Agapius Honcharenko was truly a great man who loved his Ukrainian heritage, an early champion of human rights and a fighter for the cause of freedom who had great respect for what the United States of America embodied.

Noted in American history as “that man from Ukraine who played a vital role in the growth of the American nation,” Honcharenko truly personified what it means to be a great humanitarian. Given the aggressive and tragic events happening today in Ukraine (reminiscent of Honcharenko’s life and times), where our Ukrainian compatriots are fighting for Ukraine’s democracy and freedom, it is only fitting that Ukrainian Americans continue to preserve Honcharenko’s legacy of freedom and humanitarianism.

Honcharenko wrote in his memoirs, “My Motherland, Ukraine, the source of the Kozak movement, will rise again like a phoenix for the good of all people proclaiming the Truth to all the world.”