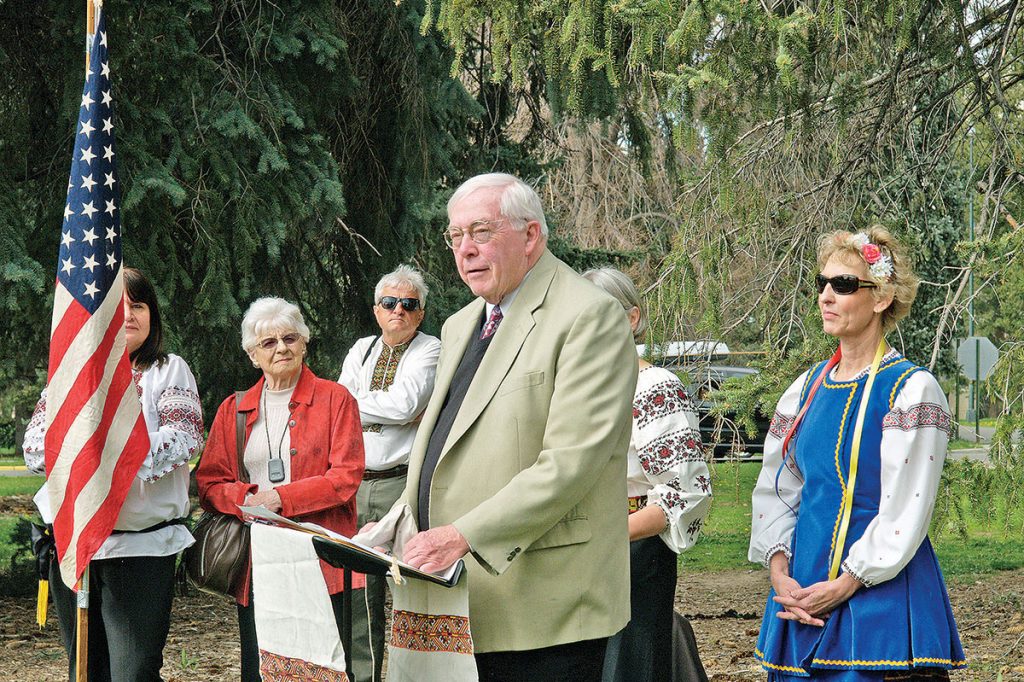 DENVER – The Denver commemoration of the 30th anniversary of the Chornobyl nuclear disaster was highlighted by the reading of two proclamations issued by Colorado Gov. John Hickenlooper and the Denver City Council.

More than 50 people attended the hour-long event on a blustery afternoon as wind gusts tore at the many Ukrainian flags brought to the solemn event.

As on previous anniversaries, the event was sponsored by the Denver chapter of the Ukrainian National Women’s League of America at a commemorative bench erected by the UNWLA shortly after the 1986 disaster.

The proceedings were in English and Ukrainian.  Catherine Shaw, UNWLA chapter vice-president, conducted the program in English, while Dr. Oksana Ruda Bantley, chapter member, translated into Ukrainian. Olga Bugir, UNWLA chapter treasurer, read the proclamations on the significance of the Chornobyl nuclear disaster.

Former Denver City Auditor and former State Sen. Dennis Gallagher, a long-time supporter of the Ukrainian community, spoke eloquently of the tragedy of Chornobyl not only for Ukraine, but for the entire world.

The event ended with a candlelight vigil and a solemn prayer by the Rev. Vasyl Hnatkivsky, pastor of Transfiguration of Our Lord Ukrainian Catholic Church in Denver.

In subsequent years, events marking the anniversaries of Chornobyl have been held at the inscribed bench.  The placement of the granite bench was additionally significant since commemorative structures are not allowed in the centrally located Cheesman Park.