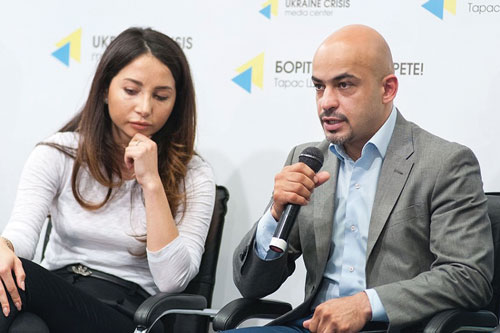 KYIV – Factcheck.com.uа is a new online tool to combat political manipulation, inaccuracy and distortion of information. Its objective is to analyze the public statements of politicians and verify how they correspond with reality. Its motto: “Only facts count.”

Factcheck.com.uа also aims to enhance the public’s information literacy, create a political culture and eradicate populism, explained Yana Ibragimova, the platform’s founder, speaking at a May 23 briefing at Ukraine Crisis Media Center. Ms. Ibragimova is also the founder of the school of governance known as Civil and Political School (CAPS).

“Now populism, deceiving people and acting on their emotions are the main threats to Ukraine. …Even after the Maidan, people still go and vote for openly populist projects. One of the reasons is the fact that people do not know the real information. And then it turns out that opinion poll results do not correspond to reality, and power is assumed by those who tell lies. Progressive young people, experts and journalists know this, but ordinary people do not get it for some reason,” commented National Deputy Mustafa Nayyem, a member of the Petro Poroshenko Bloc faction in the Verkhovna Rada and a representative of the inter-factional deputies’ association Euro-Optimists.

Igor Korkhovyi, head of the platform Factcheck.com.ua, emphasized that every statement on the project website contains a verdict and cites the evidence on which it is based. In the works are ratings of politicians by the level of their misleading rhetoric. The target audience is politicians, voters and journalists.

“The project is also targeted at voters. We know that the political culture of the average voter in Ukraine is very low. We provide information in a simplified form so that the average citizen could read and see whether a politician manipulates or tells the truth,” added Mr. Korkhovyi.

According to Oleksandr Gorokhovsky, Factcheck.com.ua’s chief editor, each item that is checked simplifies a politician’s statement for the benefit of readers. The “evidence” portion of each topic specifies arguments collected by factcheckers that prove the veracity or falsity of the statements. “We exclusively use open official sources in our evidence base. We use the information received from requests to public authorities and international partners. We do not use the statements of experts. We consult with them in order to avoid accusations of incompetence,” explained Mr. Gorokhovsky.

He added that the factcheckers do not take into account statements with value judgments, subjective opinions or prospects. Due to the high level of populism in political rhetoric, the site’s developers decided to narrow the options to three verdicts: truth, half-truth and untruth. “This is meant to make the quality and scope of untruth more clear and vivid for our readers,” explained the chief editor.

“The main thing is impartiality. People who make any political statements or are involved in any political activities should bear responsibility for them,” said National Deputy Serhiy Leshchenko (Petro Poroshenko Bloc) another representative of the Euro-Optimists. He also stressed the importance of using reliable sources to verify information. “If a politician manipulates a topical problem, we will verify his statements regardless of his political power,” Mr. Leshchenko stated.

Grigol Mgaloblishvili, former prime minister of Georgia and former ambassador of Georgia to NATO, said he believes that such a tool will create a new political leadership in Ukraine. “This project has already been operating in Georgia. It detects boundless populism and does not allow politicians to manipulate the facts and spread lies,” he stressed.