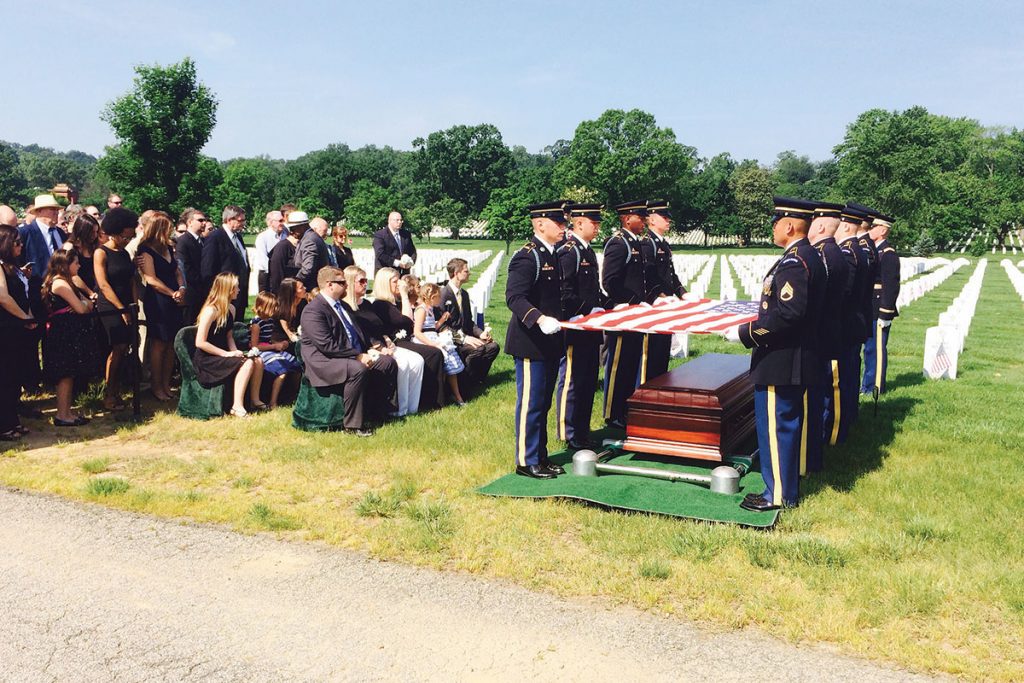 Andrew Bihun
Orest Kaczmarskyj being laid to rest with full military honors at Arlington National Cemetery with his family and friends at his side.

WASHINGTON – As thousands of people began visiting the war monuments in this nation’s capital and Arlington National Cemetery across the Potomac River in Virginia during this year’s Memorial Day weekend, a Ukrainian American joined that group of former soldiers they were coming to honor.

Orest Kaczmarskyj, a former U.S. Army lieutenant colonel, was laid to rest with full military honors at Arlington National Cemetery on Friday, May 27, with a gathering of relatives, friends and soldiers paying their respects.

And many other visitors passing through that section of the cemetery over the holiday weekend could not help but notice this new gravesite, as yet grassless, with no headstone and a small blue-and-yellow flag, and pay their respects as well.

As recounted afterwards by his son George, Orest Kaczmarskyj was born in Ukraine in 1941 and grew up in Europe within his refugee family, which then emigrated to the United States.

After college, he decided to pursue a career in the Army, where he served for 21 years as an infantry, logistics and foreign area officer. He was known for his fluency in six languages and for his intrinsic ability to quickly adapt to native dialects.

His military and post-military career took him around the world, with military assignments in Fort Benning, Ga., Fort Bragg, N.C., and with the U.S. Army Security Assistance Command in Washington, as well as for several tours in Germany and Vietnam. He also traveled to Taiwan, Singapore, Korea, the Philippines, Pakistan and Iraq, among other countries.

Mr. Kaczmarskyj died peacefully while asleep in his home in Centreville, Va., on January 8. The current almost five-month waiting list for burials at Arlington National Cemetery forced the four-month-long delay in his burial.

Until a permanent grave headstone is installed, his gravesite is temporarily marked with an identification name tag and identifiable by that small Ukrainian flag left by a member of the family.

Mr. Kaczmarskyj’s wife, Martha, preceded him in dying, passing away in 2010.

Founded in 1864, Arlington National Cemetery has more than 400,000 interment sites, 280,000 of which are the final resting places of US soldiers. Currently, between 27 and 30 funerals are conducted there every weekday.