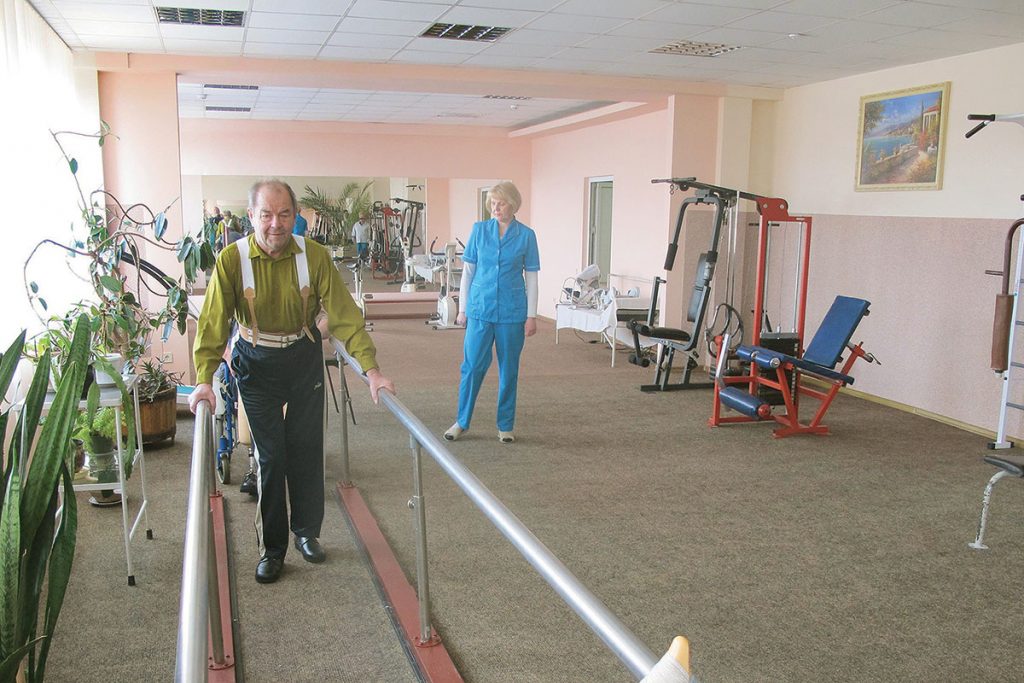 Ukrainian Weekly Editor | The Ukrainian Weekly | Subscription
View of a portion of the refurbished facilities at the Lviv State Enterprise for Prosthetics and Mobility, where Ukraine’s wounded warriors will receive specialized treatment.

LVIV – Ukrainian soldiers who suffered debilitating loss of limbs in the war with Russia in Ukraine’s Donbas region now have a better chance at leading productive lives, thanks to the united effort of three organizations – the Ukrainian National Foundation (UNF), the Markian Paslawsky Fund and most significantly the Kyiv-based International Alliance for Fraternal Assistance(IAFA).

They combined their efforts to develop a modern rehabilitation space at the Lviv State Enterprise for Prosthetics and Mobility. This is one of very few facilities in Ukraine manufacturing prosthetic limbs and fitting war victims at a time when the need for such services is critical. Now the Lviv facility will also be able to provide up-to-date comprehensive physical therapy and life skills training.

“I travel to the ATO nearly every week and am always impressed by the way our heroic soldiers exist in the most extreme conditions, yet retain a strong sense of optimism,” explained Viktoriia Voronovych, founder of the IAFA. “So I am devastated when I hear that a soldier I have come to know has lost a foot or a hand in a grenade attack or an encounter with a mine. We have a responsibility to help these soldiers lead productive lives after what they have sacrificed for our country.”

After a year of discussions, negotiations, fund-raising and procurement, the three organizations completed a project that gives patients access to a full range of comprehensive treatments. A person newly fitted with prosthetic hands or feet will not only receive the physical therapy necessary to properly use the artificial devices, but will obtain occupational therapy to develop skills to prepare food, take care of daily hygienic needs and even drive a vehicle. The rehabilitation space is newly equipped with kitchen and bathroom facilities modified to accommodate people with disabilities. Two driving simulators are scheduled for delivery by early June – one for persons with prosthetic arms and another for those with prosthetic legs. The project hopes to obtain additional funds for the purchase of specialized treadmills necessary to strengthen mobility and other rehabilitation equipment.

The journey that brought the three charitable organizations together to help the Lviv State Enterprise for Prosthetics and Mobility began with the Markian Paslawsky Fund and the IAFA joining forces to honor the memory of Mr. Paslawsky, who died on August 19, 2014, at the battle of Ilovaisk, when Russian and Russian-backed troops indiscriminately shot retreating Ukrainian soldiers whom they had previously agreed to allow to pass through a designated corridor. Mr. Paslawsky, whose nom de guerre was Franko, was a Ukrainian-American graduate of West Point who moved to Ukraine in the 1990s. He participated in the Orange Revolution and was active on Euro-Maidan before volunteering to fight with the Donbas Battalion in the Anti-Terrorist Operation (ATO) in eastern Ukraine.

Olena Paslawsky, Markian’s older sister, worked with family and friends to organize the Markian Paslawsky Fund. The generosity of the Ukrainian diaspora has resulted in contributions to a variety of initiatives in Ukraine – including supplies to soldiers on the eastern front, funds for members of the Donbas Battalion and now the Lviv Rehabilitation Facility.

“Markian’s 22 years in Ukraine were marked by a love of the people of Ukraine – he was inspired by their courage, defiance and commitment. He was proud to fight with the Donbas battalion in the ATO. He gave his life to help ensure a free and democratic Ukraine. We wanted to honor his memory by trying to help those who fought alongside him for the same cause,” explained Ms. Paslawsky. “We believe that providing wounded soldiers with a chance to live a productive life is critical.”

Prior to initiating the Lviv rehabilitation project, the IAFA was helping to place wounded Ukrainian soldiers with medical facilities in Europe and the United States, after it became clear that Ukrainian facilities had limited capabilities to effectively treat wounded soldiers.

After several long-distance conference calls, representatives of the Paslawsky Family and the IAFA agreed that developing a modern rehabilitation facility in Ukraine was a worthwhile endeavor. The IAFA undertook an assessment of Ukraine’s 16 prosthetics centers, after which the two organizations decided that the Lviv Prosthetics and Mobility State Enterprise offered the best opportunity.

“We were surprised when Viktoriia [Voronovych] first approached us about refurbishing our facility and providing a modern rehabilitation space,” explained Sergei Suyazov, director of the Lviv prosthetics facility. “We never expected that so much would happen so quickly.”

The Ukrainian National Foundation played a key role in generating much-needed funding, which allowed the project to progress. In July of 2015, the UNF organized a fund-raising benefit dinner at its Soyuzivka Heritage Center that featured well-known Ukrainian entertainers. The event raised nearly $40,000 for the planned rehabilitation center in Lviv.

“Markian and the Paslawsky family had been friends of the Ukrainian National Association and its associate charitable arm, the Ukrainian National Foundation Inc., for many years, and we wanted to help in some way,” explained Roma Lisovich, UNA treasurer. “The UNA saw this as a great opportunity to help Ukrainian soldiers, who have sacrificed so much for Ukraine’s independence and territorial integrity.”

With funds in place, a three-pronged strategy was developed. It started with the conversion of unused space into a rehabilitation center, and was followed by the purchase of modern occupational and physical therapy equipment. The final step was providing the staff with training in modern methodologies and techniques.

The project received unexpected support as it worked to implement its plan, including assistance in identifying a local contractor who agreed to undertake the remodeling work at one-third the cost of original estimates and a donor who paid to replace much of the deteriorating parquet floor.

The project also overcame the challenge of obtaining cost-effective training that met U.S. and European standards when a Ukrainian Canadian NGO, the Canadian-Ukrainian International Assistance Fund, chose the Lviv State Enterprise for Prosthetics and Mobility as its venue for prosthetics training in Ukraine. The training, done in conjunction with the World Rehabilitation Fund and the U.S.-based NGOs Prosthetika and the Wounded Warriors Fund, took place over a two-week period in April 4 and provided Ukrainian physical and occupational therapists with instruction in the most current techniques and practices.

To assure that the Lviv rehabilitation center will continue to have access to the best trained Ukrainian specialists, the project met with representatives of the Lviv-based Ukrainian Catholic University, which recently established a School of Rehabilitation Medicine. The two sides have agreed to continue discussions about a cooperative effort for training the university’s physical therapy students and interns at the rehabilitation center.

The prosthetics center’s director, Mr. Suyazov, said, “The new opportunities the project has provided open a path to develop a national rehabilitation center at the Lviv facility. We are most delighted with this gift provided by our Ukrainian and American friends, as will be all those who will now have an opportunity to learn to live a normal life with their new limbs.”

Nestor Paslawsky, Markian’s brother and the general manager of Soyuzivka, summed up the experience as “a great collaboration with amazing partners, Vika [Viktoriia Voronovych] and Roman [Woronowycz]. It is inspirational to see what can be achieved with a modest budget but enthusiastic support and commitment to a worthy cause. I hope this becomes a model for future endeavors. The need is great and a little goes very, very far.”