Visiting Washington, Groysman thanks the U.S. for its support 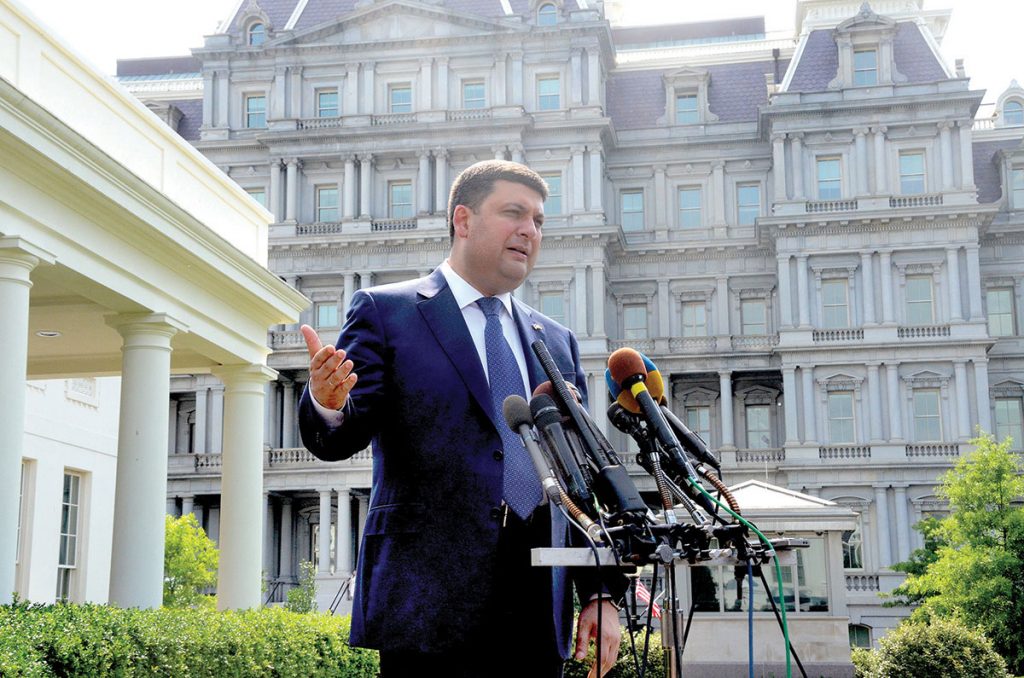 Yaro Bihun
Ukrainian Prime Minister Volodymyr Groysman briefs the White House press at the conclusion of his meeting there with Vice-President Joe Biden.

WASHINGTON – On his first visit to the United States as Ukraine’s new prime minister, Volodymyr Groysman expressed his gratitude for the American support his country is receiving for its political and economic reform programs and in stopping Russian aggression in eastern Ukraine and Crimea.

“In this very import time in Ukraine’s history we now have the strong backing of our American partners,” was how he described that bilateral cooperation to members of the press on June 15, at the conclusion of his meeting at the White House with Vice-President Joe Biden.

“And we appreciate this highly,” he stressed. “Our American partners support us in this effort – institutionally, politically and financially – so that we can implement these reforms as quickly as possible,” he said, as he thanked the United States for its leadership in stopping Russia’s aggression in Ukraine.

As Vice-President Biden greeted the Ukrainian prime minister at the White House, he praised him for his efforts. “You’ve taken on a difficult job,” he said. “We have a lot more to do. But I’m impressed.”

“One of the things I’ve talked with him about a lot – and his predecessor – is that we strongly, strongly support them,” Vice-President Biden said, adding: “This is Ukraine’s best – not last maybe – but the best chance in a while.”

Later that day, the White House released a statement that “pending completion of Congressional notification procedures, the White House plans to commit $220 million in new assistance to Ukraine this year.”

On the Russian issue, the White House statement added: “The vice-president also expressed deep concern about the deteriorating security situation in eastern Ukraine and highlighted the importance of accelerating implementation of the Minsk agreements. The vice-president reiterated that sanctions against Russia will remain in place until Russia fully implements its Minsk commitments.”

Upon his arrival in Washington the previous evening, Prime Minister Groysman was greeted at the Embassy of Ukraine by a group of Ukrainian American representatives.

The prime minister also visited Arlington National Cemetery to lay a floral wreath at the Tomb of the Unknown Soldier, and in the evening he laid a handful of wheat at the Ukrainian Holodomor Memorial.

Before continuing his U.S. visit in New York, Prime Minister Volodymyr Groysman was to address the fourth annual U.S.-Ukrainian American Working Group Summit and hold a press conference at the National Press Club.