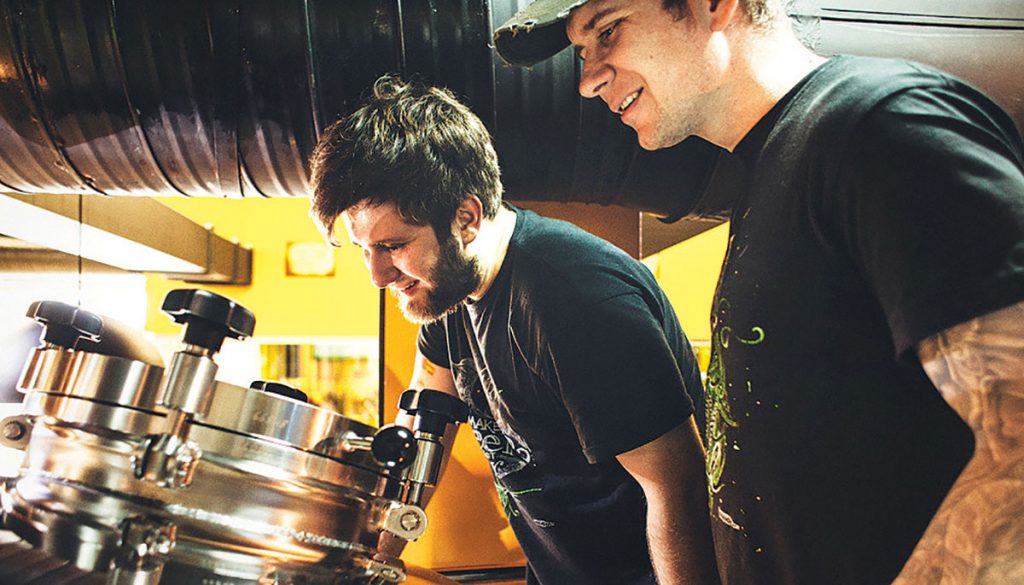 From the 11th century onward, beer was a popular beverage in medieval Poland and in the nearby lands of Kyivan Rus’. Beer brewing in the 13th century and later was a special privilege (“propination”) reserved for cities and noble landlords. In the 16th century in Ukrainian lands under Poland’s rule, small beer breweries were developed on the estates of the noble landlords (“folwarks”). Beer was brewed using local barely, hops and water, and it was often handed out to serfs as their “payment.” The quality of this beer was not very good, and it continued to decline over the years.

Beginning in the second-half of the 18th century, when Galicia came under the rule of Austria, breweries were separated from the noble estates to become separate business units employing between four and eight people. Later in the 19th and into the early 20th centuries, both the production methods (top versus bottom fermentation) and the scale of brewing changed in favor of large-scale industrial brewers (Okocim, Żywiec and Lvivska). However, some medium-sized breweries did survive, and even some small agricultural breweries were in existence in 1913 primarily in eastern Galicia.

Nothing like America’s 20th century craft brewing movement existed in Ukraine until the 21st century, even though the brewing industry had a long history there. Here are profiles of three very different contemporary Ukrainian craft breweries that serve a growing market for non-mass-produced beer.

An American brewmaster in Lviv

What is a Portland, Oregon, area native with no Ukrainian roots doing brewing award-winning craft beer in Lviv? In May 2015 Cory McGuinness packed his bags to take a job as the head brewmaster at Pravda Beer Theatre (www.pravda.beer). The microbrewery was established in December 2014 by the Fest company (http://www.fest.lviv.ua/en/), whose partners are Andriy Khudo, Yurko Nazaruk and Dmytro Gerasimov. The holding company is well-known for its innovative local ventures, including restaurants, food convenience stores, a bakery, a publishing house and public events, among others. The brewery is located in an 18th century townhouse on the northern side of Rynok (Market) Square and is a vital part of the blossoming arts and culture scene in Lviv. It has a house orchestra, which entertains its thirsty patrons with a wide range of music.

The contemporary craft brewing movement began in the United States in 1965. Today there are more than 3,400 craft breweries, which include regionals, microbreweries and brewpubs. By contrast, Ukraine has around 20 microbreweries and about 30-40 brewpubs. The Lviv market for beer has traditionally been dominated by Lvivska Pyvovarnia, a commercial brewery owned by Carlsberg. It was established in 1715 in Klepariv and grew to become among the largest beer producers in the Austro-Hungarian Empire.

Mr. McGuinness, the 27-year-old Oregon native, came to Pravda Beer with several years of American craft brewing experience and an education from the prestigious Chicago Siebel Institute of Technology, which is the oldest brewing school in the U.S. (established in 1872).

“The craft brewing industry in Ukraine today is about 25 years behind the U.S.,” says Mr. McGuinness. “I was very excited about getting the opportunity to work for a microbrewery in a European country and to try some new things.”

Running a microbrewery in Ukraine comes with its challenges. Not the least of which is the changing local regulations. Pravda has a bottle shop on the first floor of its building where customers can buy its products to take home. It also distributes its craft brew to some local restaurants. Last year its owners were informed that they would have to pay $50,000 (U.S.) annually for an off-premises license. One of the owners, Mr. Nazaruk, said this is an exorbitant fee for a small, growing microbrewery to pay and refused to do it. The issue still hasn’t been resolved.

Four of Pravda’s beers recently won international awards. “Ukrainian Imperial Stout” was its first beer to win a global award at the very competitive Brussels Beer Challenge 2015 in November in the Imperial Stout category. In January in the World Beer Idol competition in the Czech Republic, the microbrewery received a silver award for its “Ukrainian Imperial Stout,” another silver for its “Vesna” in the beer style Cascadian Dark Ale and a bronze for its “Kvadrupl” in the style of Belgian Strong Dark Ale.

The future for Pravda Beer

And what’s in the future for Pravda Beer? “We would like to expand our distribution into other regions of Ukraine,” says Mr. McGuinness. “And we would also like to secure an export license to send our craft brew to other countries in Europe and, possibly, the U.S.” Judging by the very positive response to their beer so far, they are off to a good start.

A craft brewery in the Carpathians

The village of Mykulychyn near Yaremche in the Hutsul region of the Carpathian Mountains was first mentioned in public records in 1412. The village has a tradition of beer brewing going back to 1890, when a portable brewery was established to serve workers who were building a new railway in the region. The name of the beer was Galberg.

Fast forward to 2002. Vasyl Motruk, a native of Mykulychyn whose ancestors lived there as far back as anyone knows, is a young entrepreneur and a builder by trade who dabbled in various business activities including selling wood and furniture making. First starting to brew only as a hobby, he came up with the idea of establishing his own brewery in this village, which sits in a popular green tourism belt that winds its way through the Ivano-Frankivsk region to the popular winter ski resort of Bukovel.

How it all began

Mr. Motruk took almost six years to perfect his product. He purchased beer recipes and a mini-brewery from Bavaria and sought German expertise to learn the craft of brewing. He decided to create a very special building for the brewery – built with his own hands and made of wood in the traditional Hutsul style. Mr. Motruk opened Mykulychyn brewery and a roadside shop in 2008. Using extremely pure Carpathian spring water and honey sourced from his father-in-law’s apiary, his Hutsulske beer has a truly unique local character. Always environmentally conscious, Mr. Motruk gives the spent grain from the brewing process to local farmers to use as a very nutritional feed for their animals.

There are five types of Hutsulske beer available: white (lager), dark, honey, wheat and rye. He also makes a special Hustul rye kvas (a fermented beverage made from bread). To complement his beer, Mr. Motruk offers local goat cheese as a snack. In American beer nomenclature, Mykulychyn Brewery would be considered a “nanobrewery” with its brewing capacity of 500,000 liters, or 4,261 barrels annually.

“Beer therapy” at a spa?

Mykulychyn Brewery is a completely family-run business, including Mr. Motruk’s wife, Olexsandra, who does the hiring and selling. It currently has some limited local distribution of its beer to Ivano-Frankivsk, which is 76 kilometers away. Beer can also be purchased in Ukraine from its website at http://hutsulbrew.com/index.php and is delivered by mail to customers. There are also other offerings available online from partners, including milk products, cosmetics, various oils and Carpathian honey.

Mr. Motruk is not interested in exporting his beer because he feels it would lose its unique local character and freshness in transport. Probably more important though, he eventually would like to develop a spa on the Prut River that runs through his property and connect it with the brewery. He would like to offer “beer therapy,” which is a kind of special health treatment that has been available in the Czech Republic for many years.

Some people think the antibacterial properties of beer can help fight inflammation and soaking in it with various minerals can achieve this.

The Mykulychyn Brewery does no direct advertising, but its reputation has spread by word of mouth. There is a steady stream of tourists who visit both in the summer and in the winter during the popular skiing season. Mr. Motruk’s family-run business not only produces really good beer, but also provides employment for many locals. It demonstrates how “locally produced” and “green” can thrive well together in the Carpathians.

Andrew Kysil (Keycell) and Artem (Arty) Starikov first met in 2012 in Kyiv. Arty was very interested in beer tourism and had started writing a blog about Czech beer in 2009. The two home brewers participated in a contest to crown “the best beer taster in Ukraine.” Mr. Kysil won. The two young Kyivans became beer-drinking buddies and decided to brew the first India Pale Ale (IPA) in Ukraine – a beer style completely alien to the local scene. At the time, most restaurants served only lagers, seasonal lagers, dark beer and a few bottled Belgian beers.

Through their personal connections, Messrs. Kysil and Starikov brewed the first IPA in Ukraine from their own recipe using equipment at the Prokhodymets restaurant microbrewery in June 2012. It was a quiet revolution in the emerging Kyiv beer scene that took some time to grow, but would eventually result in the establishment of some 10 all-craft microbreweries in Ukraine out of a total of 160 currently operating there. By comparison, in 2012 there were only about 12 microbreweries in Ukraine connected with restaurants and none of these produced craft beer in the American style.

The young brewers now have contracts with two restaurant-connected microbreweries providing their recipes and beer-brewing expertise. Bierwelle is located in the city of Chernihiv, not far from Kyiv. Bierwelle brews a variety of beer and has a capacity of 5,000 liters (250 gallons) per month. Tsypa, located in the village of Kvasy in the Zakarpattia region of Ukraine, is a restaurant microbrewery producing 200 liters (10 gallons) of beer on site each day strictly for in-house consumption. Their use of local pure Carpathian water is a major feature of their beer. Two of the unusual beers at Tsypa are “Blackberry Pale Ale” and “Tsypa Chorna” (black), which is an imperial stout produced from a double mash process. You can find out more about the brewery here http://tsypa.com.ua/. It is connected with the nearby Carpathian mountain resort and spa, “Hirska Tisa,” which has unique mineral springs that are said to promote good health.

Sourcing ingredients is an ongoing problem for brewing craft beer in Ukraine. In general, Ukrainian ingredients (especially hops) are low-quality and cannot be used.

Messrs. Kysil and Starikov brew with German malt and hops and Belgian yeast. Many of the traditional hops used in American-style craft beer like Centennial, Simcoe and Amarillo are just not available due to import issues with Ukrainian customs. Sometimes Ukrainian hop resellers do provide them, but not always. This is a major limitation for brewing American-style craft beer in Ukraine.

A passion for craft beer

All things considered, Messrs. Kysil and Starikov are still very optimistic for the craft brewing movement in Ukraine. They say they want to partner with people who have a passion for craft beer. And if the past is any judge, their commitment to brewing quality craft beer in Ukraine will continue to achieve incredible success and provide thirsty beer drinkers there a wide range of interesting new choices. You can find out more about Collider Brewery at http://colliderbrewery.com/.

Mike Buryk is an avid home brewer and an observer of the craft beer movement in Ukraine. He and his brew team recently successfully brewed Pravda Beer’s “Ukrainian Imperial Stout” at home based on the brewery’s recipe.  Mr. Buryk is also collecting recipes of other Ukrainian craft beers to brew at home. If you are interested in craft brewing in Ukraine and home brewing, you can reach him at Michael.buryk@verizon.net.