A library for a new era: From book repository to learning hub 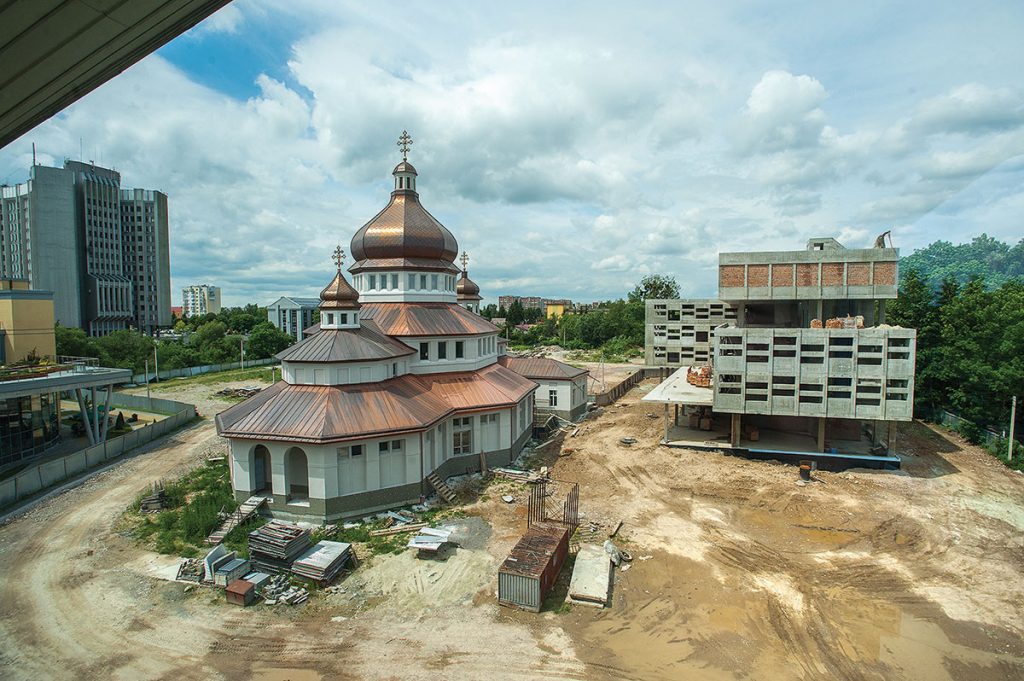 Ukrainian Weekly Editor | The Ukrainian Weekly | Subscription
The newly built University Church of the Holy Wisdom of God in the middle of the UCU Campus and the Metropolitan Andrey Sheptytsky Center (right).

“Two things can save this country: investing in infrastructure and investing in education. This is the way of all wealthy countries. So I’m glad that the Ukrainian Catholic University is taking such steps and that there are good people who support this.”

LVIV – Today the whole world is asking the question: What role should a library play when the majority of “publications” now come out digitally?

In Lviv, a new kind of library is being created at the Ukrainian Catholic University, and the Metropolitan Andrey Sheptysky Center represents a new horizon.

“The library’s openness, access to the treasures that will be collected there, the architecture and atmosphere, the hospitality and the harmony of discussions will, like a catalyst, stimulate the spiritual, intellectual and civic life of our city. The university and the wider community needs a new type of library, a place not only where books and old manuscripts are kept, but also digitized information, a place to meet for teacher and student, colleague and opponent; a place for discussions and disputes, where collected sources can be consulted and creativity can be enhanced,” explained Bishop Borys Gudziak, president of UCU.

Indeed, throughout the world, libraries are becoming meeting places and educational centers with modern technologies. Visitors choose whether to work together or separately, to discuss and work on projects or, finally, simply to relax with some coffee. The younger generation has no problem coming to the library with a Kindle and finding a needed text in the electronic catalogue. A modern library today is not simply a repository for books, heritage and knowledge, but a place to interact, work and study.

When the Ukrainian Catholic University started building its new campus, part of the project was a library where students and teachers could work. UCU has Ukraine’s largest collection of books on theological themes and unique collections in the humanities and social sciences. After an international competition, a design project was selected that proposed a library model absolutely new to Ukraine but already being implemented in the West. The learning commons principle was embraced.

In the United States, this has transformed libraries. The presentation of new books, lectures on popular subjects, regular meetings with interesting people and various other activities have become the basis for a new model of successful libraries that have been reformatted into instructional and educational centers.

The Sheptytsky Center is located on UCU’s main campus, at the boundaries of Lviv’s historic center, next to Stryiskyi Park. It is scheduled to open in the fall of 2017. Nearby are the academic building, residential collegium and the University Church of the Holy Wisdom of God, which will be consecrated on September 11. Each building is different from the others. Each was designed independently.

The Sheptytsky Center itself is reminiscent of a stack of books which, more or less, lie atop one another. The outside of the building will reflect everything that’s found inside, especially the park and the colors of the changing seasons. The building has many open terraces that will be filled with greenery and which people may visit throughout the day.

The first floor will be entirely transparent; everything happening inside will be visible outside. The interior of the center will seem as if it’s an extension of the park outside. Near the stairs there will be an atrium with plants.

German architect Stefan Behnisch (Behnisch Architekten, Stuttgart, Germany) developed the design and general plan of the center. He also designed the Alston Campus at Harvard University. Yulian Chaplynskyi, the city architect of Lviv, did the adaptation and working details, which helped conform the project to building conditions in Ukraine. Ivan Bereznicki, an American architect of Ukrainian descent who is UCU’s main architectural advisor, was also enlisted in the building project. The major donor was the Temerty Family Foundation, thanks to which it was possible to build the center quickly.

“What should the library of the future be like? I think that this project will present similar decisions that are being made through the whole world,” says Mr. Bereznicki.

“Our goal was to create a building that would respond to the challenges of the times and provide for all the university’s needs. No one wants to live in a museum. We always keep in mind the structure of the city and its architectural monuments. And we often build modern buildings in very old cities. When we discussed this with UNESCO, they were glad that we are not imitating old buildings. Reworking old structures into [something]new is not very intelligent. They never look organic. It is not possible simply to adapt old architecture to absolutely new goals, because then it will simply be a dead shell,” explained Mr. Behnisch.

The general public will have complete access to the Sheptytsky Center. The first floor will be a great public space. The reading room will allow one to access books and periodicals and order a needed book from another library. The space itself will be very flexible: tables can be arranged depending on one’s needs. Visitors can relax with a cup of coffee in the nearby cafe. There are plans to hold regular meetings and thematic open lectures in the two conference halls. There will be a separate children’s area where they can relax, play and read books together, so visitors can come to the center with their children.

“To bring people together is one of the main ideas of the future Sheptytsky Center. If you have different views and ideas, meet and discuss them there! I think this space is an example of how tradition and modernity can complement one another,” noted Sophia Opatska, dean of UCU’s Lviv Business School and head of the working group for the Sheptytsky Center public space.

The Sheptytsky Center has a goal of also helping introduce new instructional technologies. In practice, this means that any teacher will have the opportunity to record a course online, address students via video, or receive advice in interesting and effective ways. This service will be built on the Genius Bar principle, whereby a consultant is available who can respond to any question.

Scholars will receive special attention. Areas for individual work will be specially organized for them where they will be able to work as long as necessary. Professors from all over the world who travel to Lviv will easily be able to focus on their work at the Sheptytsky Center.

The future library is named in honor of a leading figure of the Ukrainian Church, Metropolitan Andrey Sheptytsky (1865-1944), a philanthropist and the founder of the Lviv Theological Academy, from which UCU developed. The metropolitan’s personality will be evident throughout the building – visitors will be able to find out about the metropolitan’s life and activities through installations and dynamic exhibits.

“In his time, Metropolitan Andrey Sheptytsky served the whole Ukrainian nation. His top priorities were education, and cultural and scholarly development. We want this center to open doors to the world of education and scholarly research, dialogue and understanding for many people: our students and young teachers, other college students of Lviv, young scholars and also school students from all over Ukraine,” stated Andriy Borovets, chief information officer.

“We would like our library – as a complement to the collegium, the academic building and the university church – to become a place of instruction and dialogue, a place to meet interesting people. It should be open to a wide circle of educational and cultural events, a place where new ideas and approaches are born, one of the city’s cultural and scholarly centers,” he underscored.