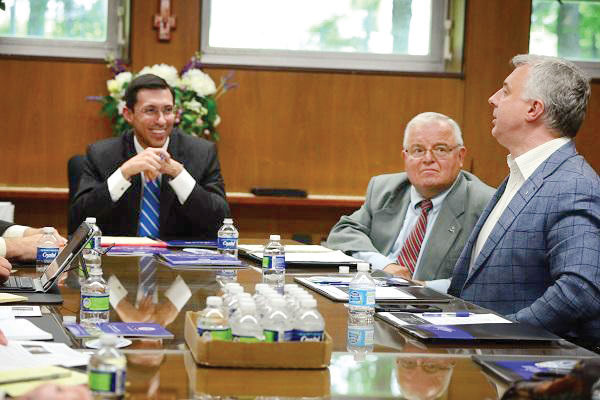 PHILADELPHIA – Dr. Serhiy Kvit, senior advisor on education to the president of Ukraine, visited the U.S. during the last week of May and had time on his itinerary to visit only one Ukrainian American community, Philadelphia, where local leaders organized a series of meetings with four institutions of higher learning and two community events.

His U.S. tour was financed primarily by the Organization for the Defense of Four Freedoms for Ukraine, led by Stepan A. Kaczurak.

Dr. Kvit is immediate past minister of education and science (2014-2016) and former president of the National University of Kyiv Mohyla Academy (2007-2014). He was a prominent participant in the Revolution of Dignity and was a member of the Maidan Committee. Dr. Kvit was in the U.S. to brief officials and relevant NGOs in Washington on education reforms in Ukraine. He also conducted press conferences and gave an extended interview to the Voice of America.

In addition to a Ph.D. in philology in the specialty of hermeneutics and mass media communication and journalism from Taras Shevchenko National University in Kyiv, Prof. Kvit earned a second Ph.D. in philosophy from the Ukrainian Free University in Munich.

The Philadelphia and Lehigh Valley branches of the Ukrainian Congress Committee of America (UCCA), headed by Eugene Luciw, and the Organization for the Defense of Four Freedoms for Ukraine (ODFFU), headed by Yuri Nakonechny, had tasked a special committee, headed by Andrij V.R. Szul, a UCCA branch vice-president, to organize a three-part program for Dr. Kvit on May 26. Collaborating in this endeavor was Prof. Natalia I. Pazuniak, former longtime professor of Ukrainian language and literature at Manor College and the University of Pennsylvania, who represented the Philadelphia Study Center of the Shevchenko Scientific Society, on whose board she serves as an honorary member.

Logistics were managed by Ivan Yaworsky and Ihor Kusznir, executive vice-president and honorary president, respectively, of the UCCA Philadelphia Branch.

The key event was a meeting with the recently installed President of Manor College, Dr. Jonathan Peri. Manor is the only Ukrainian heritage college in the U.S. Dr. Peri convened a special executive meeting to welcome the former minister of education and science.

The purpose of the meeting was to have Dr. Kvit, who is also a former member of the Parliament of Ukraine, speak about the political situation in contemporary Ukraine, especially about how high impact events, including Russia’s war and military aggression on Ukrainian soil, are affecting stability, developments and reforms in higher education. He described his high-level meetings in Washington earlier that week, where he made several presentations about the fight against corruption in Ukraine.

In addition, there were consultations about possible inter-institutional articulation (faculty and student exchanges, distance learning, research) between Manor College and the National University of Kyiv Mohyla Academy, where, prior to his appointment as Ukraine’s minister of education and science, for seven years Dr. Kvit served as president and earlier as founding director and professor of its School of Journalism. The university is among the highest rated Western-style schools in Europe, with Ukrainian and English being its official teaching and research languages.

The participants at the Manor College meeting included senior officials from the three-partner consortium of regional universities that form the University Center @ Manor College: Widener University’s associate provost for global engagement and former dean of its School of Human Service Professions, Prof. Paula Silver; and the director of Alvernia University’s Philadelphia Center School of Graduate and Adult Education, Dana Baker. Representing Immaculata University was Chris Shoemaker, director of its Division of LifeLong (Extended) Learning. Ms. Shoemaker attended in behalf of Sister Ann M. Heath, IHM, Ph.D., the university’s vice-president for academic affairs, who was out of the country at the time.

The University Center @ Manor College is a focal point in the Southeastern Pennsylvania/Metro Philadelphia region for undergraduate and graduate degrees, as well as accelerated learning, where each program (from bachelor’s degrees in more than eight majors to a doctoral degree in educational leadership, Grades K-12) is geared to adult learners studying with regular university professors in a planned sequence on Manor College’s campus in Jenkintown, Pa.

Accompanying Dr. Kvit to this executive meeting at Manor were: Dr. Pazuniak; Dr. Szul, a former professor at Manor College; and Borys Potapenko of Detroit, president of the International Council in Support of Ukraine (ICSU), who had escorted Dr. Kvit throughout his travels in Washington and the Philadelphia region.

Of the meeting, President Peri said: “Minister Kvit shared with us that in Ukraine, there are concerted and noble efforts for reform and progress. These efforts are often compromised by a system that cannot untie certain leaders from ideals that are historically and presently in conflict with the ideals of Ukrainian independence. The people of Ukraine seek to coalesce around what is right and just, which is why we see revolutions. Simultaneously, outside influence is present, and it is no secret that Ukraine suffered recent invasion. If Manor College can be a force of influence to enhance educational opportunities in Ukraine, then the endeavor for peace set forth in Manor’s mission statement grows in its fulfillment.”

Dr. Pazuniak added: “Given its unique associations with area institutions of higher learning, the Philadelphia Ukrainian American community is excited about the opportunity to assist Dr. Kvit in his endeavors to establish additional collaboration and partnerships between U.S. and Ukrainian colleges and universities.”

That afternoon, a by-invitation dinner with Prof. Kvit at Marco Polo Ristorante and Bar in Elkins Park, Pa., was attended by Manor President Peri, 20 leaders of Philadelphia’s Ukrainian community and board members from the Shevchenko Society in Philadelphia.

In attendance also were five university and college presidents: Dr. Kvit; President Peri; Sister Miriam Claire Kowal, OSBM, former president of Manor College; Dr. Albert Kipa, president of the Ukrainian Academy of Arts and Sciences in the U.S., based in New York; and Dr. Leonid Rudnytsky, president of the World Council of Shevchenko Scientific Societies, with headquarters in Lviv, and a Member of the National Academy of Sciences of Ukraine in Kyiv. Profs. Kipa and Rudnytsky have both served as presidents of the Ukrainian Free University. In fact, Prof. Kvit was once a post-doctoral student of Prof. Rudnytsky in Munich.

Attending also were three representatives of the founders of Manor College, the Order of Sisters of St. Basil the Great in Fox Chase, Pa.: Sister Miriam Claire Kowal former provincial of the Jesus, Lover of Humanity Province, in the U.S. and former general superior of the order worldwide; Sister Ann Laszok, Manor College alumna and former Manor administrator who currently is director of religious education for the Ukrainian Catholic Eparchy of St. Josaphat in Parma, Ohio, and also a councilor of the order’s U.S. province; and Sister Joann Sosler, vice-provincial of the order and, together with Sister Ann, co-director of the Basilian Sisters’ annual Summer English Language (ESL) Program for children in four regions of Ukraine. Sisters Ann and Joann were departing for Ukraine on the following day to direct this year’s month-long program, which was founded more than 10 years ago by Sister Bernarda Arkatin, OSBM.

At 7:30 p.m., a town meeting at the Ukrainian Educational and Cultural Center in Jenkintown was conducted by Dr. Kvit. The well-attended event included a contingent of non-Ukrainians. Dr. Kvit provided an overview of circumstances in Ukraine which particularly affect higher education reform, described his meeting earlier that day with officials of Manor College’s University Center and then proceeded to a bilingual general question and answer period, with simultaneous translation provided by Mr. Potapenko.

Later that same evening, Dr. Kvit also recorded two radio interviews. He was interviewed in Ukrainian by Osyp Roszka and in English by Lew Iwaskiw for the “Ukrainian Hour” of the Philadelphia/Delaware Valley Branch of the UCCA, and the “Ukrainian Hour of the UECC.” The programs, which are broadcast every Saturday on WWDB-AM 860 and via its website, together have aired in Philadelphia for almost 50 years.