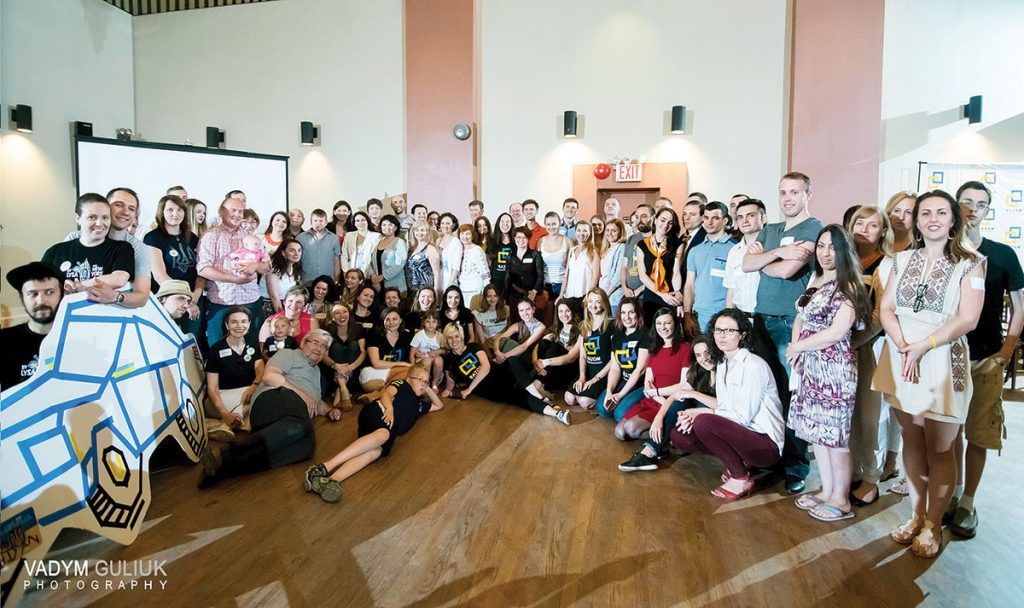 Vadym Guliuk
Participants of the Razom annual meeting held in the main hall of the Ukrainian National Home in New York City.

NEW YORK – Razom, a non-profit organization established in 2014 to support the people of Ukraine, held its second annual meeting on Saturday, June 25, in New York City. More than 140 guests attended #Razom2years and learned about the organization’s progress and six initiatives: Razom IT, Razom Culture, Razom Think with UkrOko.org, Reformers without Borders, Razom Aid with Toy Drive, and Razom Partners.

“I was so impressed to see so many new faces in the room,” said Razom board member Dora Chomiak. “Clearly this shows that, even though the headlines may be off the front pages, the drive that brought Razom volunteers together in 2014 is still relevant today.”

The schedule of the day was jam-packed, but the energy in the room never subsided. Given that Razom’s initiatives span different fields, people learned about many projects, and were able to provide their feedback, lend their expertise and enlist as volunteers. Midway through the event, everyone split up into discussions at the six initiative breakout tables. The event also featured a team-building exercise led by Dianna Derhak, a breakthrough coach, workshop and retreat facilitator.

Throughout the afternoon, the artistry in the room reflected the eclectic mix of the individuals present with art installations throughout the hall, cartoon projections on the wall, a fashion presentation and musical sets spanning many different styles. Still, many of these pieces had roots in traditional Ukrainian culture in some way.

After having dinner in smaller groups around the East Village, the guests regrouped for a Razom Culture program that started with a video installation by Mr. Danylenko and included music performances by the Roman Bardun Trio, Letters to Nepal and pianist Alex Pryrodny, and a fashion show by Ms. Lysa.

The Razom annual meeting was made possible by the many hours of work donated by its volunteers and by the generous support of Self Reliance New York Federal Credit Union, the Veselka Restaurant and East Village Meat Market.

The board members of Razom have been meeting at least twice a month throughout the year. Since members live in different cities, these meetings are held online. During the annual meeting, the board members welcomed the chance to update volunteers on projects and to meet in person.

Razom is a 501(c)(3) non-profit organization dedicated to building a prosperous Ukraine by increasing civic engagement and by amplifying the voices of Ukrainian citizens around the world. Razom was established in 2014 to support the people of Ukraine in their continued quest for democracy, justice and human rights. To learn more, readers may visit RazomForUkraine.org.