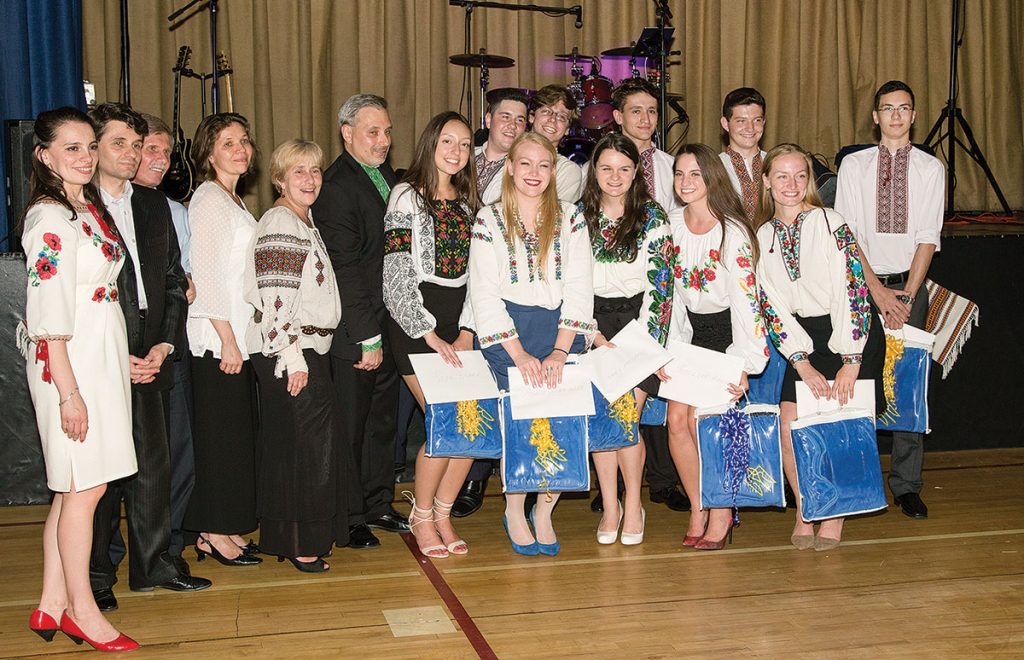 Olena Furda
Graduates of the Self-Reliance School of Ukrainian Studies in New York with their principal, vice-principal and teachers.

The official ceremony began with a solemn procession of graduates holding bunches of wheat tied in a blue-and-yellow ribbon and performing “Ukrayino” by People’s Artist of Ukraine Taras Petrynenko.

Ivan Makar, the director of the Self-Reliance School of Ukrainian Studies in New York, opened the evening and invited Bishop Paul Chomnycky, OSBM to greet the graduates. The bishop blessed the students and encouraged them to continue learning more about Ukraine. He expressed his hope that they will apply the knowledge they received in school in the future and that they never stop loving and supporting Ukraine.

The Consulate General of Ukraine in New York also sent greetings on the occasion of this festive event. Consul Myroslav Kastran delivered the official address on behalf of Consul General Igor Sybiha: “You are the young generation that is going to replace us one day; the life of Ukrainian society in America will depend on you. From today on you are responsible for its future.”

Dr. Eugene Fedorenko, the director of the Educational Council at the Ukrainian Congress Committee of America, wrote in his address to the graduates: “Cherish the language and culture of your parents, achieve success in your professional careers, but regardless where you are or what you do, help fellow Ukrainians earn true freedom and build a democratic European country. “

Each director had the opportunity to congratulate his or her students and present them with their diplomas. Along with diplomas, the graduates received gifts.

Year after year, the Ukrainian National Association offers all of the graduates monetary awards. The president of the UNA, Stefan Kaczaraj, delivered greetings on behalf of the UNA and the Self-Reliance New York Federal Credit Union. He also awarded the New York students on behalf of the credit union.

Natalia Duma, president of Self Reliance Association of Ukrainian Americans, New York branch, whose organization is also the sponsor of the Self-Reliance School of Ukrainian Studies in New York, stated: “Dear graduates, I wish you success in your studies and hope all your dreams come true. Above all, stay honest and remain vivid followers of the Ukrainian Church and become true leaders of the Ukrainian community.”

Each school had a chance to showcase its talents during the graduation ceremony. This year guests enjoyed Ukrainian popular songs, poems and bandura playing performed by the students.

After the official program commenced and graduates received their diplomas, the Svitanok band continued the evening festivities. Students, parents and their guests enjoyed dancing to Ukrainian and English songs.

This festive evening was made possible in part due to the generous financial support of the Self-Reliance New York Federal Credit Union. The parents of Self-Reliance School of Ukrainian Studies organized the beautiful graduation banquet.