A historic convention in historic Philadelphia 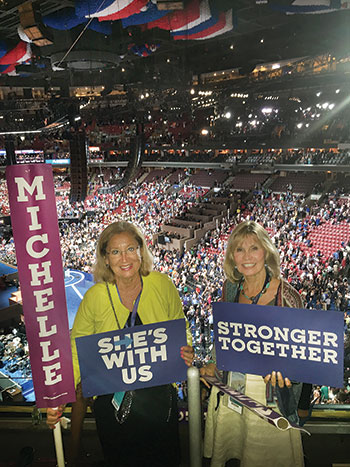 PHILADELPHIA – Huge banners strewn across Philadelphia welcomed the Democratic National Convention to the “City of Brotherly Love and Sisterly Affection” (the city’s official nickname as of 2014). How appropriate and fitting that Philadelphia, the “Birthplace of Liberty,” played host to this historic Democratic convention.

On July 26, the delegates took the unprecedented step of nominating a woman for president of the United States, and it was lost on no one that this historic moment was occurring in a city so steeped in history.

With the narrow city streets choked with limousines and security vehicles moving through traffic with sirens blaring, it was clear that business as usual in Philadelphia had been replaced with something big. The city buzzed with the recognition that the world’s attention really was focused on the events taking place just a few miles from the momentous upheaval that occurred in the similarly sweltering heat of July 1776, when the 13 colonies in their historic convention declared their independence from Great Britain. While 240 years separates the two events, they share an undeniable commonality: both, at a time of enormous consequence, sought to lay out a dramatically different vision for the future of the country.

The Democratic convention opened with pageantry and fanfare, behind which it was interesting to see the mechanics on the convention floor. The convention was beautifully orchestrated, and the participants were able to feel that they were an inclusive part of the performance. Amazingly, given the size of the attending crowd, armies of volunteers made impeccably timed interventions to distribute placards reading “Stronger Together,” “Michelle,” “America,” “Hillary,” which the wildly enthusiastic attendees waved as they chanted.

Now, if you are a Ukrainian attending the Democratic convention, you have a mission. You seize the opportunity to talk to as many reporters as possible and get out the story of Ukraine. Especially in this current vitriolic climate, it was essential to alert the media about the Trump-Putin-Manafort connection and the threat it poses not only to Ukraine but to democracy in this country.

In this mission I was joined by Marta Fedoriw, a Ukrainian American Democratic Party activist from the Lehigh Valley of Pennsylvania. We dubbed ourselves “Team Ukraine,” and we doggedly pursued our mission.

We spoke to many reporters and media celebrities, including a BBC correspondent who told us, “We are writing about this, and in the days to come we will have more about the Putin-Manafort connection, but not enough credence is given by the media to this story.”

When we spoke to Michael Smerconish of CNN, we chided him for being too soft in questioning the Trump team. We told him to not let them get away with steering their answers away from the question.

We were interviewed by a Norwegian television station that ranks as that country’s counterpart to CNN. We spoke about the Trump-Russia connection and the threat facing the world should Donald J. Trump get elected.

In another interview, the reporter asked me, “Do you think that if Trump is elected there will be no more cold war?” Considering Mr. Trump’s temperament, I replied, “We will not have a cold war, we will have a hot war.”

After the airing of that interview I received an anonymous and chilling message at 1 a.m., calling me hateful names and saying that, “If the Democratic Clinton is elected there will be World War III; if you have Trump there is no war.” The message continued with expletives and ended by saying “Go back to Ukraine you… (more expletives).

We were very happy to see many friends of Ukraine on the convention floor. There were many members of the Senate and House of Representatives who stood in support of Ukraine. We thanked those we saw for supporting Ukraine and asked for their support in the future.

Foremost among Ukraine’s supporters was former NATO Supreme Allied Commander Gen. Wesley Clark, who has campaigned to convince Western governments to provide lethal aid to Ukraine. Gen. Clark told us about his many trips to Ukraine and the importance of arming the country. I informed him that we at the Ukrainian Human Rights Committee help the volunteer brigades, in the last instance sending them “quick clot” bandages that stem the flow of blood, thus saving lives. It was truly an honor to meet such a good and true friend of Ukraine and to thank him for his support.

This convention was not only historic but it also presages the most important candidate choice in generations. It is clear that the decisions the U.S. electorate will make regarding its next president will invariably determine the future of America and the future of Ukraine.