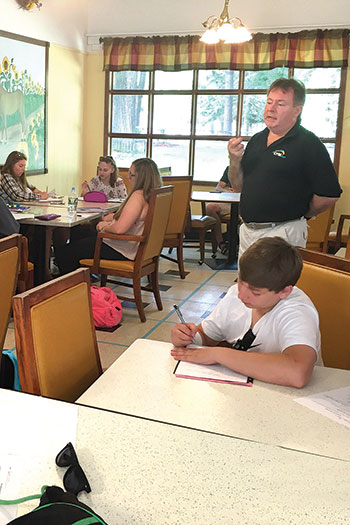 Dmitri Lenczuk
Stepan Kaczurak, president of Organization for the Defense of Four Freedoms for Ukraine, speaks to campers.

An educational camp meant to raise the next generation of Ukrainian community teachers and leaders, this year’s camp, under the direction of supervisor Chrystyna Kobyleckyj and curriculum supervisor Dmitri Lenczuk, saw visitors from several Ukrainian organizations during the course of its two weeks.

The camp also hosted the president of the Youth Nationalist Congress of Ukraine and a current coordinator of the volunteer organization Vilni Liudy, Serhiy Kuzan, who was also a main speaker at the annual Ukrainian Heroes Commemoration organized by the ODFFU.

These community leaders shared their experiences, the projects their organizations have undertaken, and plans for the future that will affect the campers and the Ukrainian American community as a whole.

During the camp, held from June 26 to July 9, the campers were not only uniquely exposed to the example of community leaders, but took part in practical and experiential leadership roles in the form of a camp council. Consisting almost exclusively of third-year campers, the council, with the help of mentor counselors, coordinated all of the events that took place during the camp.

The different paths a camp participant could take reflect the paths a member of the UAYA can take once he or she turns 18: “Vykhovnyky” (teachers), “Suspilnyky” (community leaders), “Mizhnarodnyky” (international community leaders), “Kulturnyky” (cultural organizers) and “Ratnyky” (physical activity/sport organizers). By organizing into committees that had representation on the council, campers got a better understanding of the way community activism works in the real world by practicing in a controlled setting with mentor counselors to help in the process.

This year’s camp was dedicated to the Act of June 30, 1941, which was proclaimed by Yaroslav Stetsko in Lviv and re-established Ukrainian independence under the directive of the Organization of Ukrainian Nationalists (Banderites). The official name of the camp, “The Way of Free People” (Shliakh Vilnykh Liudei), was chosen in part to honor the current fight in Ukraine for the freedoms often taken for granted in the United States, including President Franklin D. Roosevelt’s famously identified four freedoms: freedom of speech, freedom of conscience, freedom from want and freedom from fear. Each day of the camp had a daily virtue, ranging from “selflessness” to “timeliness” to “loyalty” – virtues that were cherished and practiced in order to more firmly establish UAYA’s values in the heart of each camper.

The projects organized by the campers were numerous. The ambitious Kulturnyky organized a masquerade on the first night of the camp council’s existence, along with a traditional Kupalo celebration. The Vykhovnyky group, focusing on teaching the camp something new, prepared a commemoration in honor of the Act of June 30, 1941, a formal program with songs and skits for a bonfire, and pins for the 30th anniversary of the “Sumeniata” camps on the Ellenville campgrounds. The Mizhnarodnyky were divided into two committees: the greeting committee for the visiting rock group for the Nadiya Ye Festival, Antytila, and a committee that organized a scavenger hunt/war game that simulated the battle for Donetsk airport. The Ratnyky, in addition to building the bonfire and lending manpower to other groups, organized an Olympic-style strongman competition that challenged campers physically and mentally. The Suspilnyky worked to fund the camp projects through simple fund-raisers and more complex ones, which included a volleyball tournament that was co-organized by the Ratnyky. For the second year in a row, the Suspilnyky collected plastic water bottles to recycle in New York state depositories. At 5 cents per bottle, the group was able to raise $142 that went directly to Mr. Kuzan’s organization, which helps volunteers of the anti-terrorist operation (ATO).

Campers had many other unique opportunities. One of the identifying qualities of the camp is its tie to the exchange program with the Ukrainian Youth Association in Ukraine. This year, educator Lesia Holyk of the Ternopil branch taught campers about the fundamentals of modern Ukraine, including its economics, music, film and more. Joining her were two campers from Ukraine, Darka Symchych and Anya Berezovska, who shared some of the organization’s Ukrainian traditions and learned some American ones in the process.

The campers also had a chance to meet and greet the members of Antytila, who were thrilled by the energy exuded by the camp. As in years prior, the camp also took part in the Ukrainian Heroes Commemoration organized by the ODFFU, in addition to performing at the end of the Nadiya Ye Festival.

Joining the Educational Leadership Camp this year was the newly organized Adolescent Youth Camp (Starsho-Yunatskyi Tabir), named “Country of Free People” (“Kraina Vilnykh Liudei”), dedicated to the Ukrainian actor Ivan Mykolaichuk. These campers, albeit with a separate program that included terrain discovery and outdoor activities, worked together with the leadership camp and participated in most of the activities coordinated by the camp council. Under the direction of their curriculum supervisor, Viktor Kurylyk, the new camp was a great success. The two camps together numbered over 100 campers.

The exiting third-year campers are now well on their way to joining the Ukrainian American community as teachers, organizers and leaders of the future. Reminded to do so often, the campers have begun thinking about their roles as active members of this community.