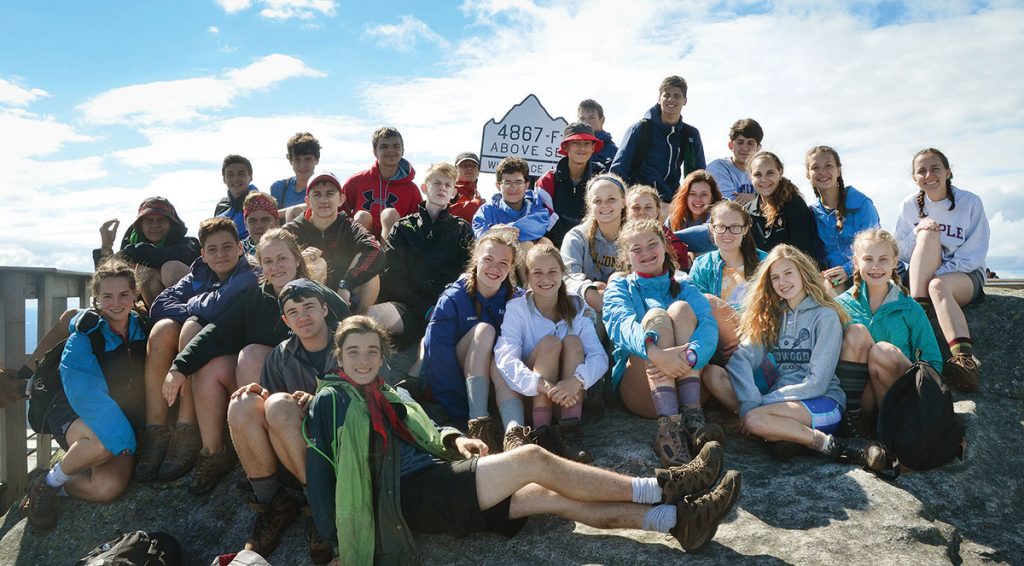 EAST CHATHAM, N.Y. – On a damp and overcast July morning, parents and their young campers were busy unpacking their supplies and making the Vovcha Tropa campground in East Chatham, N.Y., their home for the next few weeks.  They traveled from different parts of the United States, as well as Ukraine, Canada, Austria and Sweden.  Some were eager to reconnect with old friends and make new ones, others a little anxious to leave their loved ones, but all appeared excited to begin yet another camping adventure in a most picturesque setting at this beloved campground of Plast Ukrainian Scouting Organization.

The rain held off, and the opening ceremonies were held on the large sports field, overlooked from above by a breathtaking wooden Carpathian-style chapel.  Five separate camps were represented with a total of 252 campers and 58 counselors.  Parents busily snapped photos, taking in the last moments they could see their precious children for two weeks.  And just like that, after prayer, the raising of the flags and a welcome from the camp administration, the Vovcha Tropa camping experience was under way and the good times commenced.

Two weeks were spent preparing each camp’s theme, song and christening ceremonies; campers built intricate wooden gates and fences, played sports, sang, did crafts, swam, hiked, explored the vast forest terrain and enjoyed campfires.  This was a time to leave hectic schedules and tech-heavy lifestyles behind and appreciate the simplicity and tranquility of nature and the importance of friendship and camaraderie.

After countless adventures and friendships forged, “Den Plastuna” – the traditional weekend celebration following two weeks of Plast camp life – arrived.  The steady hum at Vovcha Tropa began to increase in volume as parents and loved ones checked in to visit their campers.  On Saturday, July 23, the weekend kicked off with prayer, flag-raising ceremonies and performances of all the camps’ song.  Afterwards, the campers were free to spend the bulk of the day with their families and recount the many stories of their camp escapades.  All campers returned to their camps in the evening to share a most awe-inspiring experience with their loved ones at the traditional Den Plastuna bonfire.

Den Plastuna was officially closed on Sunday, July 24, with divine liturgy led by Bishop Paul Chomnycky, followed by the lowering of the flags and a formal marching exit of all camps.  The “U2” campers (as the camp for Plast scouts age 15-16 is popularly known) had their closing ceremonies and bid farewell to each other, while the rest of the campers enjoyed a few more leisurely hours with their families.  In the late afternoon, all campers were reunited back at camp, having said their good-byes and anxiously awaiting what all consider to be “the best week of camp.”  Meanwhile, the one-week camp for first-time campers (age 7), run by the Plast sorority Spartanky  was off to a great start.

As always, all good things must come to an end.  On Saturday, July 30, individual camp closing ceremonies took place and everyone held hands in one last circle marking the end of the day (“kolo na dobranich”).  After protracted and emotional farewells, this year’s campers and counselors packed their belongings and drove off Vovcha Tropa to resume their family lives.

This year’s Plast motto is: “The only one who lives is the one who does not live for himself.”  The hope is that the experiences children have at Plast camp and in the Plast system do indeed transform them into people for others, concerned not merely about themselves, but about everyone around them and society as a whole.

Much credit it due to the Vovcha Tropa administration, led by Taras Popel, who work tirelessly year-round in preparing all camp facilities and grounds, rounding up a stellar roster of camp directors and counselors, and ensuring that all camps run smoothly and safely.  Also noteworthy are the many staffers who work day and night to provide all necessary services, as well as some comforts of home, to the campers.  And a thank-you is due to the camp directors – Musia O’Connell, Mark Mulyk, Ira Perkhalyuk, Pavlo Temnycky, Christina Temnycky and Yura Prawak – and all camp counselors for accepting the hefty responsibility of caring for the children and sharing with them the charm of Plast camp.