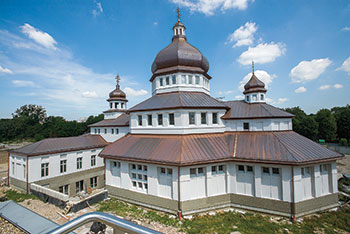 UCU
The University Church of the Holy Wisdom of God, which will be consecrated on September 11.

“It’s enough to recall the last university church consecrated on Ukrainian soil. We were without universities and they took the Church from us. Prohibitions and persecutions of culture and religion, pervasive fear, and an artificial and disastrous hostility between reason and faith made impossible a celebration like that which will happen in Lviv on September 11,” says UCU’s president, Bishop Borys Gudziak.

“Smiles should pervade UCU’s new church. The new campus of the Ukrainian Catholic University, in the center of which the new University Church of the Holy Wisdom of God is set, is being built on the site where the Communist Party planned to build its powerful administrative and cultural center. This fact demonstrates God’s humor. The Lord gives us the joy of historical paradox, and we build a house for His glory and wisdom. Under the protection of the Oranta, surrounded by the heavenly hosts, accompanied by all the saints, in particular the new martyrs, we give praise to God, Who surrounds us with His unlimited love. This church, which will be a place of pilgrimage, will point us not only to our own internal depths and to recognizing the Holy Spirit in our souls, but it will call us to mission on the outside. The architecture and spirit of the church will help us come to know our spiritual roots and lead us out, on mission, to witness in the middle of the city. This church is called to preach to the contemporary person,” he explains.

There will also be a spiritual-pastoral center at the church. There will be areas for the sacrament of confession, for discussions and meetings. “We want it to become the center of academic pastoral activities for the whole city,” notes Father Yuriy Sakvuk, head of UCU’s Spiritual-Pastoral Department. The center will begin operating after the church is consecrated.

The church will be open to the community of Lviv, not only to the UCU community. The building has an elevator and ramps have been installed, so people with special needs and people for whom it’s difficult to climb stairs will be able to safely enter any level of the edifice.

“In western Ukraine there was a big interval in church architecture, starting in the 1930s. And keeping in mind this gap, I think it’s necessary to make a place for origins and traditions, so that modern Ukrainian architecture can appear later. And then it will have its own identity and won’t be simply a form without content. This is particularly important for a university which wants to renew not only church construction but ritual traditions which went into the underground at the time,” says the architect of the University Church of the Holy Wisdom of God, Ivan Bereznicki, an American architect of Ukrainain descent.

The bells of the church, named in honor of St. Pope John Paul II, Patriarch Josyf Slipyj and Cardinal Myroslav Ivan Lubachivsky – figures without whom it is impossible to imagine the history of the Ukrainian Catholic University – have already been blessed.

The program for the consecration of the new university church begins on Saturday, September 10, at 4 p.m. with a prayer service for divine mercy at St. George Cathedral, followed by a prayerful procession from the cathedral to the university church, transferring the Yaroslav wonderworking icon Door of Mercy. At 6 p.m. there will be vespers; and a concert program is scheduled for 7:30 p.m.

The next day, there will be matins at 8 a.m. At 10 a.m. the hierarchical liturgy with the order of consecration of the University Church of the Holy Wisdom of God will be led by Patriarch Sviatoslav in concelebration with the bishops of the Ukrainain Greek-Catholic Church’s Synod. A festive reception is slated for 12:30 p.m. to be followed by a concert of religious music at 2 p.m.