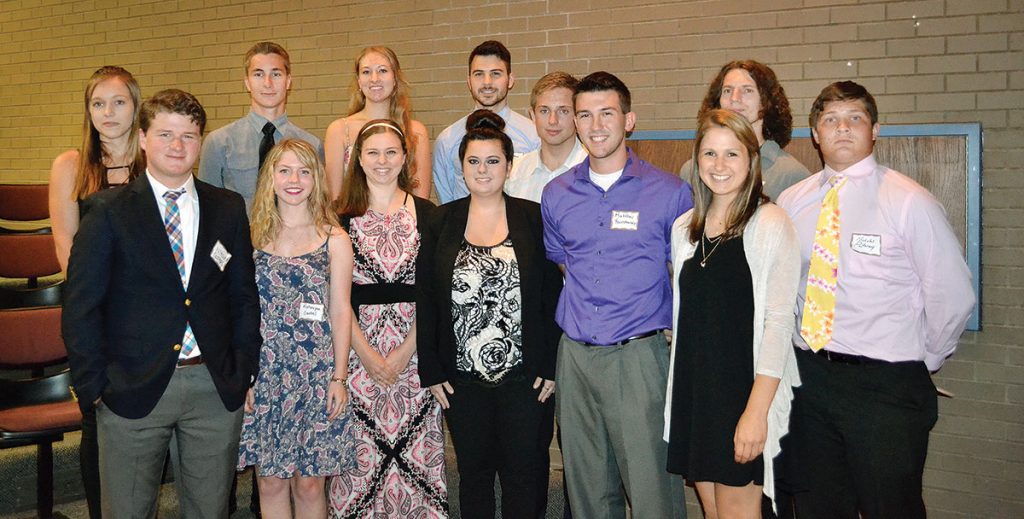 PITTSBURGH – The Ukrainian Technological Society (UTS) of Pittsburgh presented its 2016 Scholarship Awards to 15 undergraduate and graduate students from Western Pennsylvania and Ohio in ceremonies at Posvar Hall on the University of Pittsburgh campus on Sunday, August 7.

Students, family members, UTS members and guests were welcomed by UTS Executive Board Secretary, Motria Hodowanec, who provided an overview of the UTS – now in its 47th year – and its activities. In her opening remarks, she thanked the many donors who have generously offered their financial support to the scholarship program, which has helped students pursue higher education in a variety of fields.

Ms. Hodowanec noted that the society is an organization of Ukrainian professionals and businesspersons interested in cultivating Ukrainian culture and social awareness, and strengthening the Ukrainian community through active participation and leadership.

In addition to the scholarship program, Ms. Hodowanec spoke of the society’s annual tradition of selecting and recognizing a Ukrainian of the Year. Awardees are selected for outstanding scientific or scholarly contributions, humanitarian contributions, or for outstanding efforts in the advancement or perpetuation of Ukrainian culture. Although the society had to cancel last year’s award ceremony and dinner dance due to the conflict with the Holodomor Memorial Dedication Ceremony that took place in Washington, nominations are now being solicited for the 2016 Ukrainian of the Year.

Featured speaker for the award ceremony was Maria Chirovsky, chaplain at the Children’s Hospital of Pittsburgh of the University of Pittsburgh Medical Center. She delivered an inspiring talk about her faith and professional journeys and how the two have intersected throughout her career. Ms. Chirovsky’s presentation combined thought-provoking points with heartfelt stories and humorous asides that enthralled the audience and provided the scholarship recipients with the takeaway message that God is always in their lives.

Ms. Hodowanec and UTS Executive Board members Michele Kapeluck and Halyna Mykhailiv Ciarallo awarded the 15 scholarships totaling $8,000. This marked the 44th year of the UTS Scholarship Program, with 440 separate awards made totaling $203,700 to 280 different students. The UTS gave an additional $500 to Smoloskyp Inc. to fund scholarships for students in Ukraine.

The Chester and Olga Manasterski Memorial Scholarship, underwritten by sons Myron and Gregory Manasterski, was awarded to Andrew Sywy of Carnegie, Pa.

The Michael and Anna Komichak Memorial Scholarship, underwritten by Mr. and Mrs. Michael J. Komichak and Mr. and Mrs. Raymond Komichak, was awarded to Maria Kalymon of Carnegie.

Refreshments and a social hour followed the program in the Posvar Hall Galleria.

To learn more about the UTS, its scholarship program, and other activities, visit the web site at www.utspgh.org. Or “friend” UTS on Facebook at “Ukrainian Technological Society (UTS) of Pittsburgh.”

Donations toward the 2017 Scholarship Program are being accepted. Donations are tax-deductible, as provided by law, as the UTS has Internal Revenue Code 501(c)(3) designation. Donations or inquiries may be sent to the UTS at P.O. Box 4277, Pittsburgh, PA 15203. Donations can also be made securely via PayPal by visiting the UTS website and clicking on the “Support” page. You may contact the UTS by e-mail at  Board@utspgh.org.