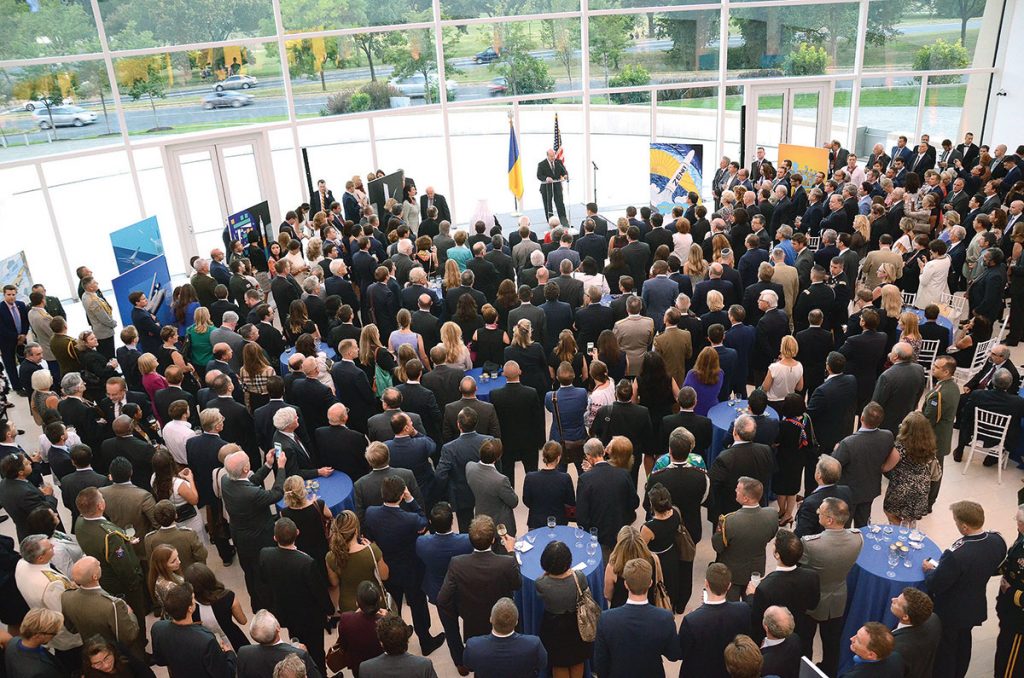 Yaro Bihun
A large crowd of representatives of Ukrainian American, diplomatic, government, business and other organizations fills the central hall of the United States Institute of Peace on September 13 in Washington to celebrate the 25th anniversary of Ukraine’s independence.

WASHINGTON – To celebrate the 25th anniversary of Ukraine’s independence in Washington, the Embassy of Ukraine in the U.S. chose a venue whose name has symbolic meaning for the country – the Institute of Peace, which is located in the very center of downtown.

There were over 500 guests at the Embassy’s reception, among them U.S. officials and foreign diplomats, American political analysts and NGOs activists, representatives of international financial institutions and U.S. business, the local Ukrainian community and the media.

In his welcome address to the audience, Ukraine’s Ambassador to the U.S. Valeriy Chaly expressed gratitude to the U.S. for its firm support of Ukraine in counteracting Russian aggression and American leadership in consolidating the world’s joint response to Russia’s violations of international law. He emphasized that Ukraine appreciates U.S. assistance in implementing reforms in the defense and security sector, as well as in the social and economic sphere.

Acknowledging the efforts of the U.S. Ukrainian community, on behalf of the president of Ukraine the ambassador decorated Dr. Ihor Voyevidka, president of the Omelian and Tetiana Antonovych Foundation, with the Order for Merit (third Degree).

The event was attended by commissioner of the President of Ukraine for the affairs of Crimean Tatars, Mustafa Dzhemilev, who stressed that any kind of compromise on Crimea is unacceptable. Among other guests of honor were wounded Ukrainian warrior Oleksander Kosolapov (he is currently undergoing medical rehabilitation at the Walter Reed National Military Medical Center) and Metropolitan Antony of the Ukrainian Orthodox Church of the U.S.A.

Ms. Brink underscored that sanctions against Russia would remain in place until commitments were fully fulfilled by Moscow. Members of the U.S. Congress emphasized that the United States would never recognize Russia’s illegal annexation of Crimea, and America would stand by Ukraine in countering Russian aggression because it is a fight for universal human values.

Ukraine’s achievements and perspectives in scientific research and development were presented in the form of an exhibit, “50 Inventions Bestowed by Ukraine to the World.” Ukraine Сrisis Media Center trustee Nataliya Popovych briefed the guests of the Embassy about the emergence and implementation of that outstanding project.