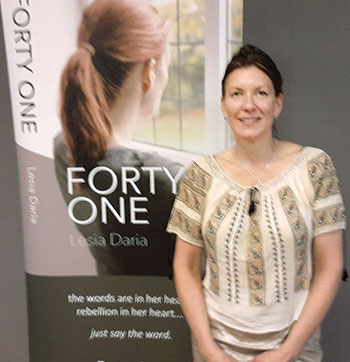 The author grew up in Philadelphia, graduated from the Ukrainian Heritage School at the UECC, and currently lives in London with her husband, Mike Scholey. She held the book launch as part of a tour in the United States to promote her book.

“Forty One,” which took five years to complete, is about a middle-aged married disconcerted Polish woman named Eva Holden, who lives in London with her English husband, Harry, and two children, while searching and struggling for the meaning of life through many venues – science, religion, philosophy and love.

At the beginning, Eva feels trapped at home with her children, while her husband works abroad. She faces boredom and questions her existence. While reminiscing with past lovers Adam and Xavier, Eva ultimately resolves these conflicts as the themes of displacement and sacrifice are explored.

Another interesting section in the book takes place when Eva and the family return to Przemysl, Poland, for Christmas. The traditions and history of Ukrainians and Poles are discussed with empathy. The author’s beautiful use of figurative language in descriptive passages brings the characters and places to life.

Before becoming a fiction writer, Lesia Daria worked as a journalist in Washington, New York, London and Kyiv. She studied at the University of Virginia, Sorbonne Paris IV and the Institute d’Etudes Politiques and earned her master’s degree from the London School of Economics and Political Science.

“Forty One” may be purchased at Barnes and Noble or on Amazon.