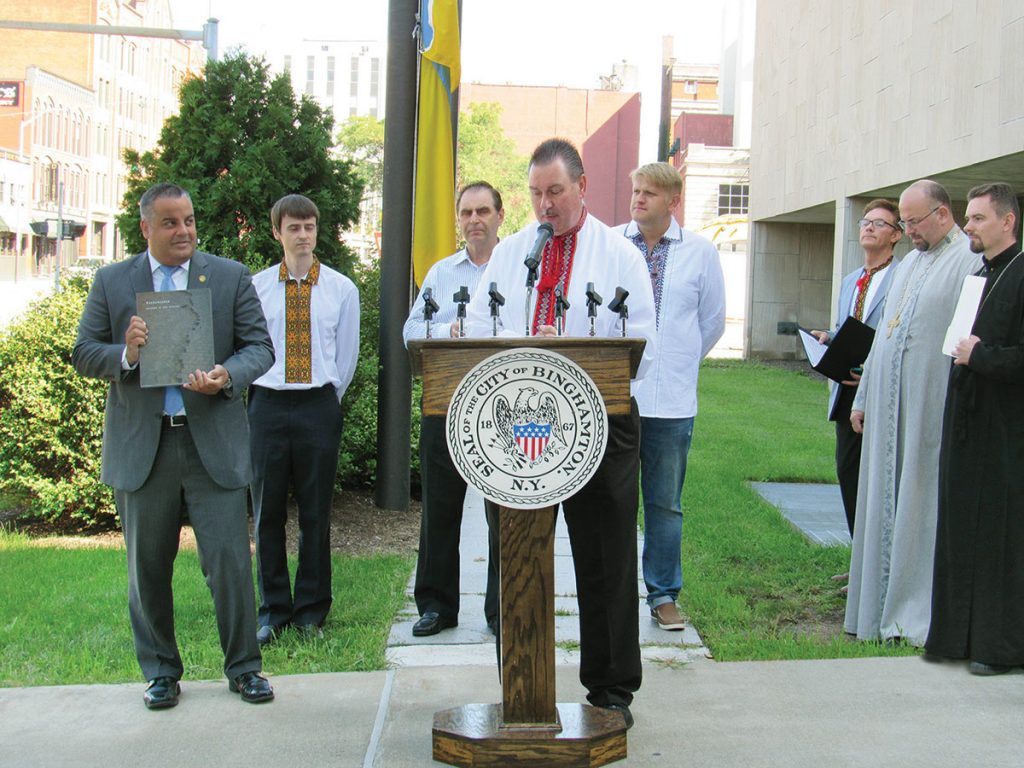 BINGHAMTON, N.Y. – The annual Ukrainian Independence Day flag-raising celebration at Binghamton City Hall started in the 1950s with the founding of the Ukrainian Congress Committee of America branch in Binghamton, N.Y., with the mission to represent the Ukrainian American community. Parishioners from all Ukrainian churches are the backbone for our activities.

Victor Czumak was the UCCA coordinator and spokesperson at the 2016 event on August 24. The Rev. Teodor Czabala, pastor of Sacred Heart Ukrainian Catholic Church, the Rev. Ivan Synevsky of St. John the Baptist Ukrainian Orthodox Church and Pastor Nikolay Ilchishin of the First Ukrainian Pentecostal Church reminded the attendees of the power of prayer for Ukraine.

Vitaliy Ilchishin presented Mayor Richard David with an English edition of a book about the Euro-Maidan and Mr. Czumak introduced Mayor David, who read the proclamation designating August 24, 2016, as “Ukrainian Independence Day” in Binghamton.

Taras Stets highlighted the current concerns and issues important for Ukraine and for the Ukrainian community.

Mr. Czumak recited in English the “Prayer for Ukraine,” which also served as an introduction to Eugene Czebiniak’s vocal performance of this wonderful prayer. Mr. Czebiniak is the church choir director at Sacred Heart.

Later in the day, there was an ecumenical Thanksgiving prayer service at Sacred Heart Ukrainian Catholic Church, followed by a get-together.

Several members of the Binghamton community traveled to Ukraine for this year’s celebrations of the 25th anniversary of Ukraine’s renewed independence. For example, Zenon Ivanonko took his nephew and niece to celebrate this event in Ukraine. Lubomyr Zobniw went to Kyiv as an UCCA delegate to the Ukrainian World Coordinating Council’s forum attended by diaspora delegates from over 50 countries.