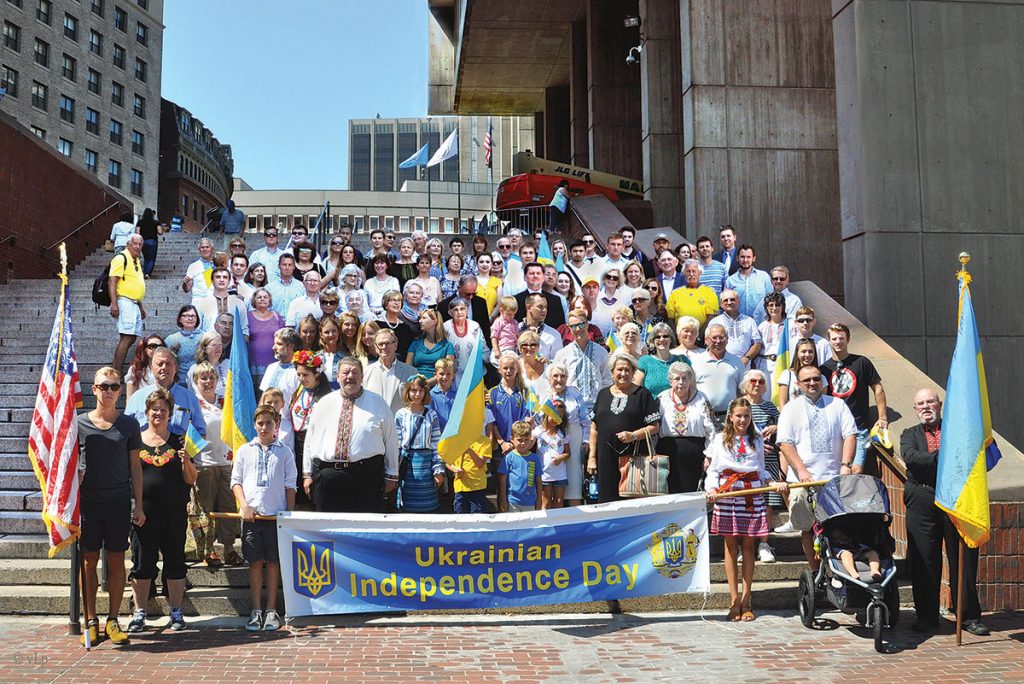 BOSTON – The Ukrainian American community of greater Boston and eastern New England began its celebration of the 25th anniversary of Ukraine’s declaration of independence with three days of events centered around August 24, which was the date of the Ukrainian Parliament’s actual vote for independence. All of the festivities were under the auspices of and hands-on coordination of the Ukrainian Congress Committee of America, Boston branch, in conjunction with a number of local organizations and a host of volunteers.

The various events included a number of formal church services, a ceremonial flag-raising at Boston’s City Hall, a photo exhibit showing Ukrainian life in Boston over the last 130 years, a reception hosted in the City Council Chambers, a three-hour boat cruise in Boston Harbor, cooking classes featuring varenyky and holubtsi, and a traditional Ukrainian picnic on the spacious nine-acre grounds of Christ the King Ukrainian Catholic Parish.

In all, more than 1,500 people attended some part of the celebration, and, it should be noted, a very high percentage of those who took part were fairly young, wore Ukrainian embroidery (vyshyvanky), and were members of the fourth wave.

The events began with the morning celebration of a liturgy for Ukraine and the Ukrainian nation at Christ the King Church by its pastor, the Rev. Dr. Archpriest Yaroslav Nalysnyk. A mid-day program and flag-raising followed at Boston City Hall; led by UCCA Boston’s President, Vsevolod Petriv, it drew more than 120 participants.

Mr. Petriv opened the ceremony by welcoming everyone and then by calling for a moment of silence to honor those who gave their live for Ukrainian independence. He then called on the Very Rev. Archpriest Roman Tarnavsky, pastor of St. Andrew’s Ukrainian Orthodox Church, for the Invocation. Local tenor Michael Hotz sang the American national anthem, and the founder and principal of the Commonwealth Lyric Theater, Olha Lisovska, sang the Ukrainian national anthem.

Three city councilors then took to the podium. Councilor Michael Flaherty spoke of Ukraine’s ongoing battle to win and maintain its freedom and independence; Councilor Annissa Essabi-George, whose grandparents and mother fled Poland before the advancing Soviet army, referred to her personal familial experience and emotionally expressed her solidarity with the Ukrainian community; and Councilor Matt O’Malley read a resolution from the City Council honoring Ukraine’s 25th anniversary of independence.

The benediction was delivered by Father Nalysnyk, who prayed in Ukrainian: “…Oh Lord, bless our Ukrainian people for untiring work and acceptable prayer for the continued development of a free, independent and united Ukraine. Oh Lord, help our people preserve and further develop their native language, history, culture, national dignity, and eternal spiritual treasures both here and in Ukraine… God Bless America… God Bless Ukraine.”

Following the ceremony, most participants went into City Hall to view a photo exhibit in the Mayor’s Gallery curated by Ms. Saxe, assisted by Dr. Lubomyr Hajda and John Crowley of City Hall, which featured candid shots of life of Boston’s Ukrainians over the past 130 years. They then continued on to the City Council’s Piemonte Room for a reception co-hosted by Councilor Essabi-George and UCCA Boston.

On Thursday evening more than 160 young people, most in vyshyvanky, gathered aboard the Provincetown II for a three-hour cruise of Boston Harbor. The event was arranged and coordinated by Ostap Nalysnyk. While the ship can accommodate more than 600 passengers, the Ukrainian group was the largest on board. Since this was the case, the DJ agreed to play a number of selections throughout the cruise by Okean Elzy and Ruslana.

On Sunday, August 28, both Boston churches offered their main liturgies for Ukraine and the Ukrainian nation. Following the liturgies UCCA Boston sponsored the traditional Independence Day picnic on the grounds of Christ the King Parish, drawing more than 700 celebrants.

The traditional Ukrainian kitchen offered more than 1,000 varenyky from the cooking class that had been taught by Kateryna Parshykova and over 500 holubtsi from a similar class taught by Vera Bokhenik. Gallons of borsch and kapusta, along with rings of kovbasa disappeared, as did mounds of cole slaw, potato salad and various green salads; a variety of open-face sandwiches were offered, including those made with salo, and the parish grill was very active with shashlyk sponsored by the Ukrainian Federal Credit Union and directed by Yuriy Onyskiv. Members of the Ukrainian American Youth Association (UAYA) manned dessert tables inside the parish center and generated over $700 for the cause.

Jars of honey from a local Ukrainian apiary were available and, as part of a parish initiative to promote heart-smart, healthier dining alternatives spearheaded by Father Nalysnyk, fresh fruit and vegetable smoothies were also offered. Most of the produce used at the picnic was donated by A. Russo and Sons of Watertown.

There were tented areas with tables that accommodated several hundred people and there were small canopies for various organizations including UCCA Boston, Ukrainian American Veterans, Ridna Shkola, Wounded Warrior Ukraine, Art Help Ukraine, Ukrainian Federal Credit Union, UAYA, Ukrainian Americana Educational Center of Boston, Plast Ukrainian Scouting Organization, Kozatski Zabavy and the Sunflower of Peace Foundation which were there to explain their work, sell items, and raise money for their projects. The logistics for the “tent city” were organized by Volodymyr Chmyrov and Halina Czaban.

At 12:30 p.m. a brief formal ceremony that mirrored Wednesday’s ceremony at City Hall was conducted and then a large group of children under the direction of Oksana Seneyko performed tributes to Ukraine.

The picnic continued almost to dusk and special attention was given to the children and youth. A traditional Ukrainian khata (home) had been constructed, and the Kozatski Zabavy included kozaky, clowns, face painting, balloons, arm-wrestling, storytelling, races, art work and songs. This effort was undertaken by a group of young people, coordinated by Miron Kravchuk and Iurii Kryvanych, and sponsored by the Sunflower of Peace Foundation.