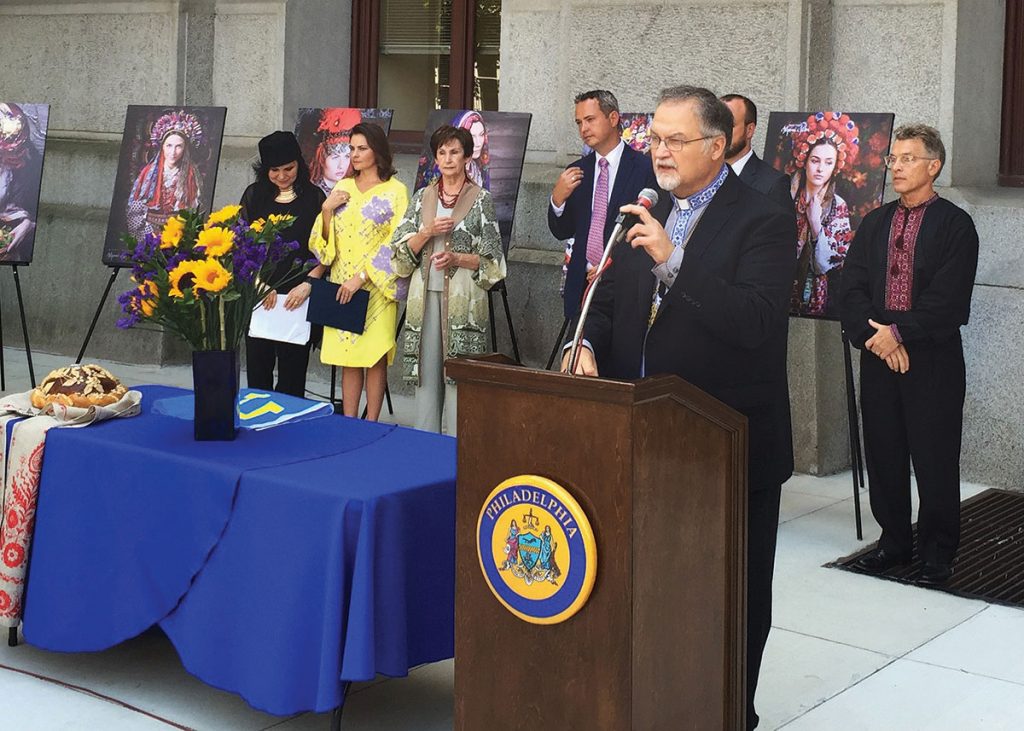 PHILADELPHIA – The Ukrainian American community of the Greater Philadelphia area observed the 25th anniversary of Ukraine’s independence on August 24 during an outdoor ceremony on the North Broad Street area of Philadelphia City Hall.

The proclamation was accepted from Mayor Kenney by Ihor Sybiha, consul general of Ukraine in New York, who addressed the audience.

Greetings were offered by Rep. Michael G. Fitzpatrick, co-chair of the Congressional Ukrainian Caucus; Col. Bob DeSousa, state director, Office of Senator Pat Toomey; Julius Pranevičius, consul general of the Republic of Lithuania in New York; and Ayla Bakkalli, representative of the Crimean Tatar Mejlis at the United Nations and adviser on indigenous matters to the Permanent Mission of Ukraine to the U.N.

Dr. Zenia Chernyk, president of the Ukrainian Federation of America, which organized the event, gave words of welcome after being introduced by Roman Petyk, who served as master of ceremonies.

The national anthems of both the United States and Ukraine were sung by Yuliya Stupen, and the Ukrainian flag was raised at City Hall.

Metropolitan-Archbishop Stefan Soroka of the Ukrainian Catholic Archeparchy of Philadelphia offered the closing prayer, praying for Ukraine and all who lost their lives defending Ukrainian independence and sovereignty.

The prayer read, in part:

“…We pray for the freedom of all people in this world, that all may taste release from oppression and subjugation. A quarter century ago, Ukrainians rose from despair with hope as a free and independent nation. …

“Lord, You have received the souls of over 10,000 soldiers and civilians who have died defending Ukraine. Grant them a place in Your eternal Kingdom for their ultimate gift of sacrifice of life in defense of others.

“Thousands of civilians have been wounded and have become refugees. Grant Your healing to all who suffer. The celebrated liberty of a nation, Ukraine, is again being challenged, a challenge which will impact the freedom loving people of neighboring countries in Europe who have also released themselves from the captivity of communism. …

“I conclude with the words of prayer offered by the Ukrainian poet, Taras Shevchenko, ‘O Lord, Grant us leave to live! We have faith in Your power and living spirit! Truth will arise! Freedom will arise! And to You alone, will all the tongues bow down, for ever and ever,’ Amen.”