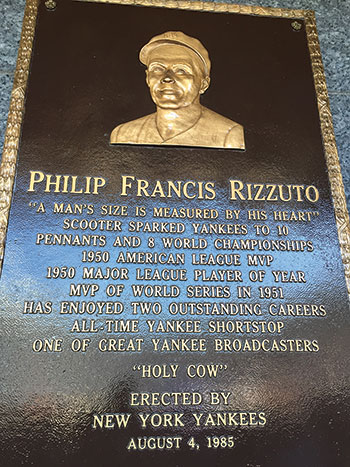 HILLSIDE, N.J. – On, Sunday, September 25, Phil Rizzuto – famed N.Y. Yankees shortstop and Hall of Famer, a.k.a. “The Scooter” – would have celebrated his 99th birthday.  Mr. Rizzuto was born on September 25, 1917, died on August 13, 2007, and was a long time resident of Hillside, N.J.  After the 10:45 a.m. September 25 Sunday divine liturgy, Immaculate Conception Ukrainian Catholic Church of Hillside held a special panakhyda for Mr. Rizzuto.

In 1957, Mr. Rizzuto and local businessman Frank Rizzo donated the first contribution to the Immaculate Conception Ukrainian Catholic Parish’s building fund. What is amazing is that neither Mr. Rizzuto nor Mr. Rizzo had any connection to our parish or to our Ukrainian Catholic rite – other than both being residents of Hillside, N.J.

This is a great example of “neighbor helping neighbor.” Those who had the privilege of growing up in the 2.7-square-mile township of Hillside in Union County, know that residents respected all ethnic groups, religions, cultures and economic classes. Helping each other was the norm.

Thus, it was very appropriate for the parish to remember Mr. Rizzuto on what would have been his 99th birthday.

In addition to Mr. Rizzuto’s generous donation to the parish 59 years ago, Mr. Rizzuto was well-known for giving special birthday wishes to fans when he broadcast the N.Y. Yankees games on radio and TV for over 40 years.

Now, it was our honor to say “Happy Birthday” to Phil, pray for the repose of his soul and wish him “eternal memory” (Vichnaya pamiat).