Special prayer services in honor of first Eastern Catholic bishop in the U.S. 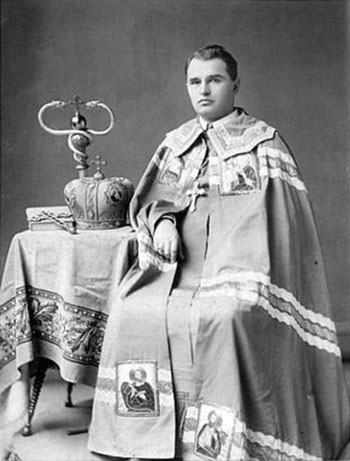 PHILADELPHIA – On Sunday, October 30, at 3 p.m. a special moleben prayer and memorial service in memory of the late Bishop Soter Ortynsky, the first Eastern Catholic bishop in the United States, will be led by Metropolitan-Archbishop Stefan Soroka at the golden-domed Ukrainian Catholic Cathedral of the Immaculate Conception, 830 North Franklin Street, Philadelphia, Pa.

Archbishop Soroka will be joined in the prayer service by brother bishops of the Ukrainian Catholic, Byzantine Catholic and Latin Catholic Churches, together with the priests and deacons of the Philadelphia Archeparchy.

The homilist for the services will be the Rev. Dr. Ivan Kaszczak. Father Kaszczak recently authored the book “Bishop Soter Stephen Ortynsky: Genesis of the Eastern Catholic Churches in America,” which recounts the struggles Bishop Ortynsky experienced as the first hierarch for Eastern Catholics in the United States in the early 20th century, before the canonical establishment of separate jurisdictions for Ukrainian Catholic and Byzantine Catholic Churches in the United States.

The faithful are invited and encouraged to attend these services in honor of the first bishop to serve the Ukrainian Catholic Church in the United States. After the services, all are invited for refreshments, which will be served in the cathedral social hall.

Bishop Soter Stephen Ortynsky was the first bishop of all Eastern Catholics in the United States.

He was born in Ortynychi, Lviv Oblast of Ukraine, on January 29, 1866. He made his vows with the Order of St. Basil the Great on January 1, 1889, and on July 18, 1891, he was ordained a priest by Metropolitan Sylvester Sembratovychof Lviv, and celebrated his Liturgy of Thanksgiving at the Monastery Church in Dobromyl.

Pope Pius X appointed him as bishop for the Eastern Catholics in America and named him titular Bishop of Daulia on March 26, 1907.

He was consecrated bishop on May 12, 1907, by Metropolitan Andrey Sheptytsky, Bishop Constantine Chechovych and Bishop Gregory Chomyshyn in St. George Cathedral, Lviv.

On May 28, 1913, the Apostolic See named Bishop Ortynsky as exarch, granting him full ordinary jurisdiction, making him independent of the jurisdiction of every Latin diocese in the United States.

Bishop Ortynsky contracted pneumonia and died in Philadelphia on March 24, 1916. An estimated 10,000 to 15,000 people attended his funeral. The celebrant was the vicar general of the Philadelphia Eparchy, the Very Rev. Aleksander Dzubay.

His body is buried in the crypt of the Ukrainian Catholic Cathedral of the Immaculate Conception in Philadelphia.